Will the daily routine of finger pricking to monitor blood sugar levels finally come to an end for the millions living with diabetes?

Diabetes affects over 463 million people worldwide. Diabetics have to test their blood sugar levels several times a day, usually by pricking their finger with a lancet. This can be uncomfortable and painful for many, which can result in less frequent testing and consequently worse control of blood sugar levels.

The last decade has seen the rise of blood sugar monitors that are installed by pricking the skin and only need replacing every few weeks. One of the best sellers is FreeStyle Libre, developed by Abbott Diabetes Care in the US, which measures glucose levels in the interstitial fluid between the cells right under the skin.

Many companies around the world aim to make the lives of millions of people with diabetes easier by developing non-invasive methods of glucose monitoring. Making these methods as accurate as traditional test strips is a tough undertaking, however. One high-profile example is the Google Contact Lens, whose development was stopped in 2018 because its method of reading glucose levels in tears wasn’t consistent enough.

Companies that can crack the challenges of measuring glucose accurately and affordably with no needles stand to reap a share of the fast-growing market of blood glucose monitors. Here is a shortlist of some of the most exciting candidates in the market and in the pipeline.

D-Base is a shoebox-sized blood sugar monitor developed by the German firm DiaMonTech. The device measures blood sugar levels by beaming an infrared laser through the skin of a finger and causing glucose in the skin to convert the light to heat. The machine then calculates the glucose levels based on how much the skin’s heat increases, though the temperature rise is too small to be noticed by the user.

In 2019, D-Base was approved in the EU for use by medical professionals in clinical trials and diabetes centers. The company is now developing D-Base for the US market. Additionally, DiaMonTech is working on smaller versions of the technology, including a handheld device called D-Pocket and a small sensor that can be used in wearable devices. 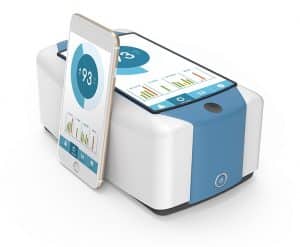 Developed by the US company Senseonics, Eversense is a subcutaneous implant that continuously monitors blood glucose levels. Although it initially needs to be installed under the skin by a doctor, the sensor can last for up to three months before needing a replacement.

Eversense measures glucose in the interstitial fluid under the skin of the upper arm by using a polymer that fluoresces in response to the levels of blood sugar. The data is then sent to a transmitter that displays the blood glucose levels in real time.

The device received FDA approval in 2018 and the company struck a deal with Roche to distribute the sensor. A six-month version of the implant was approved in Europe in 2017 and FDA approval of this version is expected by the end of 2021. Senseonics is also working on an implant that can last for up to one year. 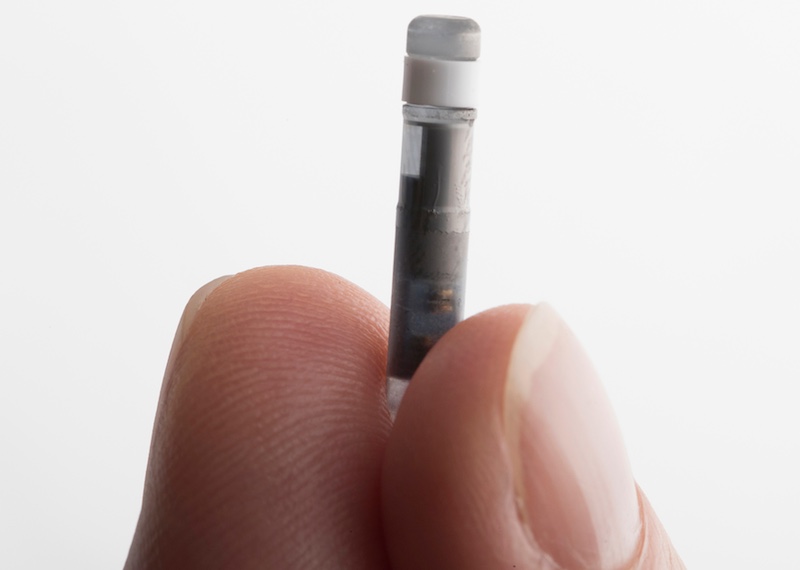 Developed by the US-Israeli company Integrity Applications, GlucoTrack can monitor blood sugar levels through a combination of ultrasonic, electromagnetic, and thermal waves. To provide a readout, the sensor is clipped on the ear.

The device is indicated for adults with type 2 diabetes and is marketed in Europe. ​​Integrity Applications now aims to expand into the US and is developing the second generation of GlucoTrack, which consists of a wireless ear clip sensor paired with a smartphone. 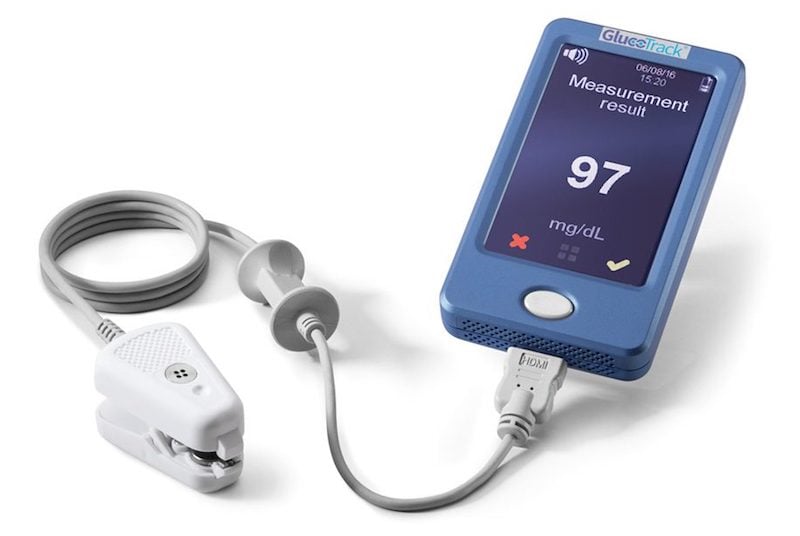 GlucoWise is a sensor under development that could measure blood glucose levels by just placing it on the skin between the thumb and forefinger. The real-time measurements could then be sent directly to a smartphone app.

By using a specific frequency of radio waves to measure blood glucose levels, the developers believe the device should be more accurate than other wireless glucose monitors.

The UK firm behind the technology, MediWise, was acquired by the Canadian smart materials and photonics specialist Metamaterial Technologies in 2018. Metamaterial Technologies is continuing the development of GlucoWise and in July 2021, it began human trials of a version of GlucoWise that blends a variety of wavelength sensors and machine learning to get more accurate results.

NovioSense is a Dutch startup working on a blood sugar monitor that is placed under the lower eyelid, from where it can wirelessly send glucose measurements directly to a smartphone. The device consists of a flexible metal coil of just two centimeters in length with nanosensors contained inside. In turn, the coil is covered by a protective layer of soft hydrogel.

The coil could measure minute-to-minute changes in the glucose levels of tear fluid by using the same enzyme technology on which conventional glucose strip tests are based. According to results from a clinical study published last year, the device is comparable in accuracy to the FreeStyle Libre.

NovioSense was acquired last year by an undisclosed private equity firm in the US and is licensing out the technology to players in the diabetes space.

As an eye-focused blood glucose meter, Occuity Indigo takes a literal approach to the expression ‘the eyes are windows to the soul.’ Rather than measuring tear fluid, as did the Google Contact Lens, the UK developer Occuity looks within the eyeball because it is a transparent, stable environment whose glucose levels correlate with those of the blood.

The Occuity Indigo sends a faint beam of light into the eyeball and measures the light that bounces back into the device. It can infer glucose levels in the eye based on the refraction of the returning light.

Occuity is fuelling the development of the monitoring technology with a crowdfunding campaign on Seedrs. Occuity is also developing a similar device that can screen people at risk of developing diabetes and other health conditions in the future.

SugarBEAT, developed by UK biotech Nemaura Medical, is a replaceable skin patch attached to a transmitter. It measures blood glucose levels non-invasively by passing a low-level electric current across the skin that draws out a sample of the interstitial fluid, found just below the skin.

The transmitter, which is rechargeable, sends data to the user’s phone every five minutes using Bluetooth and the readings can be monitored using an accompanying app.

Nemaura’s smart device already has marketing approval in the EU and is expected to get FDA approval later this year.

This article was originally published in July 2018 and has since been updated with the most recent developments in blood sugar testing. Cover illustration by Elena Resko, images via Novartis; Integrity Applications; Senseonics; Mediwise; Noviosense; Nemaura Medical; Occuity; DiaMonTech