With the rise of antimicrobial resistance across the globe, and with a dire lack of new antibiotics in the pipeline, more attention is going towards developing innovative treatments and technologies that kill superbugs in completely new ways. Here, we take a closer look at some of the most promising of these technologies emerging from the European biotech scene.

Humanity is in trouble. In 2014, then British Prime Minister David Cameron warned that the problem of antimicrobial resistance threatened to send us “back into the dark ages of medicine.” Since then, the problem has only become more urgent: superbugs are spreading fast, more patients are dying of superbug infections each year (with superbugs predicted to be a bigger killer than cancer by 2050), and the developmental pipeline of new antibiotics is worryingly dry. Just this month, pharmaceutical giant Novartis abandoned its research into new antibiotics, joining a long list of big pharma companies halting or scaling down their antibiotic research and development in recent years.

Based in Oxfordshire, UK, Matoke Holdings is developing an ingenious new treatment based on a natural human biological defence mechanism — reactive oxygen. This is normally generated by our cells as a by-product of oxygen metabolism.

Matoke’s lead pharmaceutical candidate based on its reactive oxygen technology, RO101, is applied in the form of a gel directly to the site of infection. Reactive oxygen becomes activated upon contact with water and bodily fluids, killing any bacteria present. Liquid, powder and aerosol forms are also in development.

“The activity of RO101, tested against a range of pathogens including multi-drug resistant or especially drug-resistant strains, offers an alternative to frontline and even last-resort antibiotics which are in danger of being lost to clinical use and overuse.”

But if we’ve learned anything from the last 70 years of antibiotic use, it’s been to never underestimate the evolutionary cunning and sheer adaptability of bacteria, so how do we know that the superbugs won’t, in time, just evolve resistance to reactive oxygen treatments too?

Dryden isn’t particularly worried: “Matoke Holdings has not yet observed resistance in a clinical setting over 5 years of use of the prototype Reactive Oxygen technology,” he explained. “And the mechanisms of antimicrobial action have a low propensity to induce resistance.”

Matoke is working on a Phase I clinical trial design for RO101 and hopes for active clinical development to start later this year.

“Antibiotics are weapons of mass destruction: extremely powerful but imprecise. With eligobiotics, we can precisely intervene on the microbiome – targeting specific bacteria for interventions of our choice. By engineering the microbiome itself with sniper-like precision, we can address the cause, not just the symptoms, of bacteria-associated diseases,” CEO Xavier Duportet commented.

The CRISPR/Cas9 machinery is packaged inside a modified bacteriophage, a virus that already targets bacteria. The eligobiotics are also engineered to kill specific bacterial strains by targeting precise DNA sequences. Because the CRISPR component of the eligobiotic is so highly programmable, it can be modified to target only those sequences found in the target pathogenic bacteria causing the infection, leaving other strains unharmed. It can even be programmed to kill only bacteria that are resistant to antibiotics, by targeting DNA sequences found in antibiotic resistance genes, stopping the superbugs in their tracks.

Eligo’s biotherapeutics are currently in the preclinical stage, but the company recently raised $20M in a series A investment round and plans to use this cash to launch a Phase I clinical trial for their first therapy in early 2020. 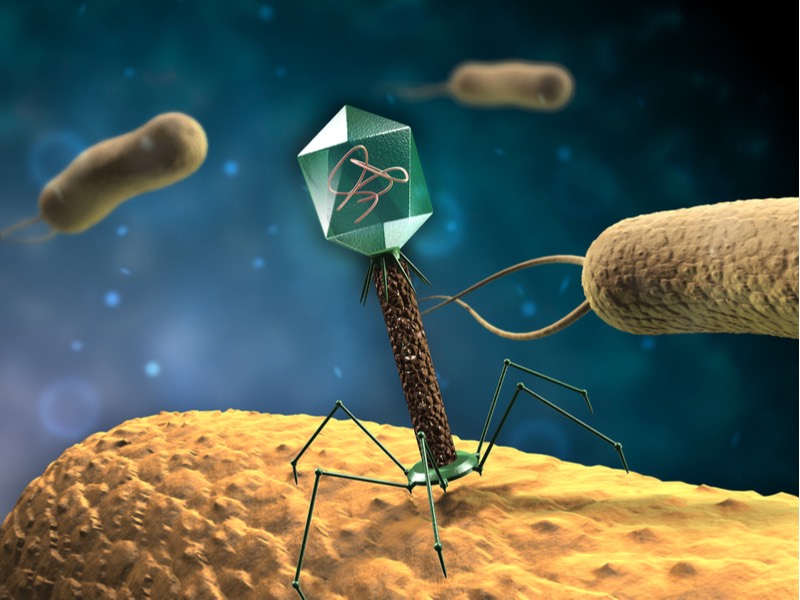 How to deal with infectious bacteria? Infect them right back. This is the approach being championed by Paris-based Pherecydes Pharma who are working to harness a natural predator of bacteria, bacteriophage viruses, to treat infections.

Bacteriophages (literally ‘bacteria eaters’) are highly efficient killers. They seek out their bacterial target and hijack the cell’s internal machinery, forcing it to replicate more bacteriophages, which then burst out from within the bacterium, destroying it. And best of all, they can’t infect eukaryotic cells, only bacteria, so they are completely harmless to humans.

Pherecydes envisages that their phage therapy would be personalised for each patient, administered as a ‘phage cocktail’ of selected bacteriophages highly specific for the patient’s strain of bacterial infection. This would have the added benefit of leaving the body’s beneficial bacteria unharmed, avoiding the problem of microbiome disruption caused by conventional antibiotic treatments.

Bacteriophages are also highly adaptable and so are capable of rapidly countering bacterial resistance when and if it emerges, continuing a natural co-evolutionary arms race between phages and bacteria that stretches back billions of years.

According to their website, Pherecydes Pharma believes that their phage therapy can offer “a realistic alternative to the therapeutic impasse faced by antibiotics.” They plan to launch clinical trials for two of their phage therapies in 2018/19: PHOSA for the treatment of severe Staphylococcus aureus infections and PNEUMOPHAGE for the treatment of Pseudomonas aeruginosa respiratory tract infections.

Images via Eligo Bioscience and Shutterstock