New advances in diabetes research are making it possible to develop a fully automated insulin delivery system that can control blood sugar without any input from the patient. This so-called artificial pancreas could be here within the next decade, but there are still three main challenges that scientists have to address to get us there.

In the last decade, there have been massive improvements in the technology used to control the sugar levels of people with type 1 diabetes and advanced type 2 diabetes. There are now devices that monitor your glucose every 5 minutes and send the information to your smartphone. There are insulin pens that record how much insulin you have used every time. There are different types of insulin for different times of the day, and there are pumps that can be programmed to deliver insulin over time according to your needs at a given moment.

“I’ve seen the technology go in leaps and bounds to make our lives better,” said Greg Peterson, a 59-year old with type 1 diabetes, during the 2019 International Conference on Advanced Technologies and Treatments for Diabetes (ATTD). “But every single one of those tools has increased the burden of the patients. The patient has more responsibility, more information to process, more decisions to take.”

These technologies are flooding patients with devices to carry everywhere and continuous information they need to act on. And these are decisions they cannot ignore — too little insulin and you risk experiencing severe long-term complications; too much insulin and your life is in immediate danger.

A fully automated artificial pancreas has become a ‘holy grail’ for type 1 diabetes. Such a device would be able to predict how much insulin a person needs at any given moment without their input. This would not only take a big burden away. It could also improve glucose control, as the algorithm can be more precise than the person.

Last year, Medtronic launched the first device labeled as an ‘artificial pancreas’ in Europe. However, the system can only make predictions when the person is not eating or exercising, and if the sugar levels go too high or too low, it will switch back to manual mode. Medtronic’s device is what is known as a ‘hybrid loop’ system, whereas a fully automated system would be a ‘closed loop’.

At the ATTD conference, I had the chance to talk to several players working to close the loop. They all believe we will achieve it within the next decade — if we tackle the following three big challenges first.

One of the biggest challenges to create an artificial pancreas is that current forms of insulin don’t react quickly enough to big changes in blood sugar. For example, after a meal.

“Meal absorption is much faster than insulin absorption,” said Ahmad Haidar, who researches artificial pancreas systems at McGill University in Quebec. “This is why we usually give insulin before the meal, so that it works at the same time the meal is absorbed.”

Last year Novo Nordisk launched Fiasp, the first of a new generation of insulin that acts significantly faster than conventional insulin. While most mealtime insulins take 10-20 minutes to start acting, Fiasp does so after a couple of minutes. However, its maximum effects are not reached until 1-3 hours later, meaning it is not yet fast enough to enable an artificial pancreas to react quickly enough in response to blood glucose changes.

“You want insulin to be as close to a healthy person’s physiology as possible. There’s certainly room there for insulin to be faster than current insulins,” said Sarah Howell, CEO of Arecor. This British company is developing a technology to improve the performance of drugs used in diabetes treatment, including making insulin faster.

“What we’re aiming for is being significantly faster than Fiasp. An insulin that’s truly super-fast acting can be the final piece in closing the loop,” Howell told me.

With promising results in preclinical studies in pigs, Arecor expects to start the first trial in humans soon. If everything goes well, Howell expects this insulin to launch in a 5-year timeframe.

But insulin does not only need to be faster to start acting. “There’s being faster in the beginning and there’s ending faster as well. This is really important because if the insulin lasts too long, then the algorithm can’t catch up,” said Savita Bernal, Director of Communications at Adocia.

The company, based in Lyon, France, is working on a technology to make the absorption of insulin faster by ‘shielding’ insulin molecules. This prevents them from interacting with other molecules and thus insulin arrives faster to the bloodstream. According to Bernal, Adocia’s fast insulin has proved it’s at least 30% faster than current forms of insulin in humans and it is now ready to enter phase III clinical trials.

Another challenge with insulin is making more concentrated formulations that allow the next generation of artificial pancreas devices to become smaller. It’s not as easy as it sounds. “If you go much higher than current insulin concentrations, the insulin is absorbed more slowly into the blood and blood glucose goes down more slowly,” explained Howell. “We’re able to use our formulation technologies to counteract that effect so that we can develop very highly concentrated insulins that are also fast acting, which is critical for the closed loop.”

Insulin alone is unlikely to be enough to adequately regulate blood sugar levels in a fully automated artificial pancreas. After all, it is not the only hormone involved in regulating blood glucose in healthy people.

One candidate is amylin, a hormone that is secreted by the same cells that produce insulin. “Amylin is secreted in healthy individuals, but is lost in people with type 1 diabetes,” explained Haidar. “One of the things that this hormone does is slow the meal absorption, so insulin has more chances to be able to control the sugar levels.”

Amylin also decreases appetite and suppresses glucagon — a hormone with the opposite effect of insulin that increases the levels of blood glucose by taking it from the body’s natural reserves. Altogether, amylin makes insulin work better.

With the help of pramlintide — an injectable form of amylin — Haidar expects we can get significantly closer to a fully automated artificial pancreas. Currently, people with type 1 diabetes have to count the carbohydrates in each meal to calculate how much insulin they need. Haidar’s group at McGill University is running a study where patients don’t have to. “The patient simply presses a button to say, ‘I am eating.’ You don’t need to worry about whether the meal is small, medium or large. We think we can get there with pramlintide.”

Although pramlintide is already available, the challenge for an artificial pancreas is having a formulation of insulin and amylin together. Currently that’s not possible because they need different conditions to be stable in liquid form.

Adocia is using its shielding technology to develop such a combination of insulin and pramlintide. In a first trial in humans, the formulation proved to reduce the spikes in blood sugar after a meal when compared to a conventional insulin treatment.

However, Bernal warns that this combination might not be used by all patients, as it requires two drugs instead of one: “It will definitely bring a lot in terms of medical benefits, but it also means that it may be more costly.”

Glucagon is also likely to be a key piece in creating a fully automated artificial pancreas, especially for those that experience bigger swings in glucose levels. “It will be a bihormonal pump where you have insulin to bring down your blood glucose and glucagon to bring that back up if you’re going towards hypoglycemia,” said Howell. “It could give greater control to people with more brittle diabetes or those who exercise a lot.”

The problem with glucagon is that it is unstable in liquid form. Currently it is only available as a powder that needs mixing and is only intended for emergencies where the blood sugar levels go dangerously low. Arecor, Adocia and several other companies, including Zealand Pharma in Denmark and Xeris in the US, are developing formulations of glucagon that are stable in liquid form. They could be in the market in just a couple of years, but more development is required before they can be used in bihormonal pumps.

The final piece in the puzzle are algorithms that can automatically measure and control glucose levels in the blood. Interestingly, most of the advances in this front come from DIY communities and universities, with groups in Canada, the US and the UK driving innovation.

These algorithms need to be able to adapt to the needs of each person and their changing circumstances. “You can definitely not use the same algorithm for everyone. Even for the same individual, things change over time,” said Haidar. “You need adaptation, but you need to be careful not to adapt too much or too fast.”

Haidar cites the example of a patient that gets sick for a week, during which their insulin need grows significantly. If the system adapts to thinking the patient has become insulin resistant it will not work properly when the patient is healthy again. 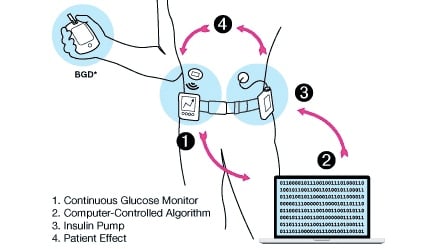 The first step towards a fully automated system will be simplifying the calculations of how much insulin is needed for a meal. Rather than counting the carbohydrates in every meal, the person will tell the system whether they are eating a meal that is small, medium or large. “That will come soon,” said Haidar. “You don’t need to have new hormones or significantly more advanced algorithms.”

The next step will be just telling the system the person is eating. From there it gets trickier. “Moving into a fully closed loop is a much bigger challenge,” said Haidar. “For that, we really need innovation around the drugs.”

As the algorithms advance, it is important that research focuses on lifting the burden off the patients. “We need human-centric design for the artificial pancreas. We need to test in real life scenarios that challenge the system,” said Eyal Dessau, a researcher at Harvard working on automated delivery of insulin and glucagon.

When will we have a fully automated artificial pancreas?

Hearing about the multiple challenges to creating an artificial pancreas raised an important question: is it really possible to create a system that works as well as the pancreas of a healthy person?

“We don’t really need to be as good as a natural pancreas,” answered Haidar. “What we’re interested in is to have good enough control to prevent complications. We don’t need to get there as long as people live healthy lives.” Much like an airplane flies without mimicking the way birds do, an artificial pancreas doesn’t necessarily have to work the exact same way a human pancreas does.

The technology of companies like Adocia and Arecor, which improves on existing drugs, could be key to make the development of an artificial pancreas faster and more affordable. “There’s a huge amount of pressure on insulin pricing around the world, and patients don’t want to wait another 10-15 years for the next-in-class insulin,” said Howell. “If you can improve these drugs without having to modify the drug itself, you can bring these products to market at a relatively low cost and also quickly.”

There is a huge number of players tackling these challenges, either in the industry, academia or the DIY community. Thanks to their advances, an artificial pancreas could be here within the next decade. “My guess is that in eight to ten years we might have a fully closed-loop system as a commercial product,” said Haidar. He expects that after that first generation, we will be able to keep improving on the performance of fully automated devices to help people with diabetes live healthier lives.

“I do believe that, ultimately, the loop will be closed,” concluded Howell.