A wave of new technologies to synthesize DNA faster, cheaper and more accurately could have a far-reaching impact across all areas of biology research.

Ten years ago, Sylvain Gariel was working for the French oil company Total, engineering microorganisms to produce biofuels. It was tedious work.

“You had to introduce hundreds of genes into the microorganisms. It took a lot of time and money, and it didn’t work most of the time,” Gariel told me. “While it took months to build a new strain, reading its genetic code only took a couple hundred dollars and less than 24 hours using next-generation sequencing.”

The advent of next-generation sequencing meant that a whole human genome could be read within one day instead of several years. So why not translate that principle into DNA synthesis?

Gariel and two of his colleagues at Total started looking for a way to write DNA faster, cheaper and with fewer errors. In 2014, they founded DNAScript. The goal of this company based in Paris is to develop a brand new way of writing DNA that can replace traditional chemical synthesis.

The core technology behind DNA synthesis methods used nowadays was invented in the 80s. This chemical method, known as phosphoramidite synthesis, creates a DNA strand by sequentially attaching together nucleotides, the building blocks of DNA.

“Phosphoramidite chemistry is an efficient technology, but it uses toxic chemicals that are only stable for one or two weeks, making the cost of operating DNA synthesizers very high,” said Gariel.

Another problem with current DNA synthesis methods is the accuracy. “These methods can add individual nucleotides with a great efficiency, perhaps as high as 99.6%,” said Steve Harvey, CEO of Camena Bioscience, a company developing new DNA synthesis methods in Cambridge, UK. “However, as DNA length increases, any small errors will accumulate.”

This imposes a limit in the length of the DNA molecules that can be created. Nowadays, the maximum length offered by most providers is at around 200 to 300 base pairs.

Learning from life itself

In recent years, an alternative to chemical DNA synthesis has started to emerge. These new methods rely on biology by making use of DNA polymerase, the enzyme that is responsible for the synthesis of DNA within our cells.

“This idea has been around for a very long time. You can find people in the 80s and 90s who describe the concept of making DNA using enzymes,” said Gariel. “The limiting factor was the ability to engineer these enzymes to make them able to work with modified nucleotides.”

These modifications are necessary to control the order in which nucleotides are added, one at a time. “It’s like making a pearl necklace, you need to add the pearls one by one,” Gariel explained. “If you want to make a necklace that’s A, T, C and G, you have to add A, then T, then C and then G.”

Bringing DNA synthesis to the benchtop

The restrictions of chemical DNA synthesis methods currently in use have meant that in most labs, writing DNA has been outsourced to third party providers. The new wave of DNA synthesis technology could finally change this, making DNA synthesis affordable and simple enough to be performed at the lab benchtop. This could significantly reduce the time it takes to obtain a DNA sequence needed for an experiment, giving researchers more flexibility.

Along with DNA Script, Evonetix is one of the players developing a benchtop DNA synthesizer. Based in Cambridge, UK, this company is developing both chemical and enzymatic DNA synthesis methods that are significantly faster than the current standard thanks to precise temperature control.

Evonetix starts by creating DNA sequences of about 50 nucleotides in parallel across thousands of wells. These molecules are then assembled together to build larger DNA sequences.

“We use our algorithms to detect what temperature is needed to destabilize an incorrect or inaccurate matching,” said Stephanie Brooking, Head of Product Management at Evonetix. “If there is an error, the heat will be enough to destabilize the molecule, so you’re removing errors before you assemble them.” 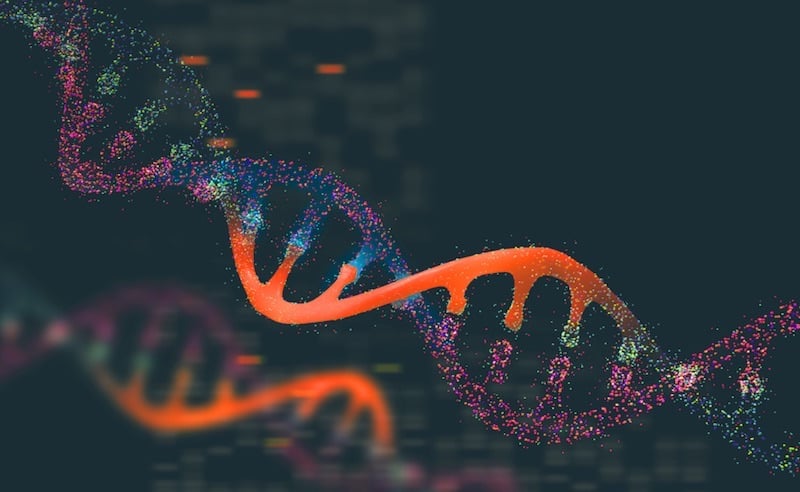 This parallelization is what made the speed of DNA sequencing go massively up while driving prices down. If the same principle can be applied to DNA synthesis, it could result in a similar explosion of applications.

“Previously, when it was just service providers that had access to it, this kind of limited people’s imagination when it came to what they could do,” Brooking told me. “Having fast design-build-test cycles, especially for synthetic biology, is a huge advantage… The iteration is much faster and there’s much less friction when you have your own platform.”

With increased accuracy, new DNA synthesis methods are starting to push the limits in terms of the size of the DNA molecules than can be created. The bottleneck then becomes time.

But while many enzymatic processes in development aim to build DNA molecules by adding one nucleotide at a time, some players seek to massively reduce the time it would take to make big DNA molecules of tens of thousands of nucleotides. Among them are Camena Bioscience and Ribbon Biolabs, a company founded in Vienna in 2017.

Harold de Vladar, Ribbon’s founder and CEO, was also driven to this field after experiencing first-hand the frustration of working in a research project that required the synthesis of multiple genes. “It was expensive, it took months, and it had a lot of errors in the sequence,” he told me.

To get around the challenge of synthesizing very long DNA sequences, Ribbon focuses on assembling together short sequences of about 20 base pairs. “We have a library of presynthesized sequences,” de Vladar explained. “It’s built in a smart way, so we can cherry-pick the ones we need to cover most of the genetic space.”

While these starter sequences come from providers that use chemical methods, the assembly is made using an enzymatic method that prevents the introduction of errors during the assembly process.

The different pieces that make up the final molecule are assembled in parallel rather than one by one, massively shortening the time it takes to produce a large molecule

“You go step by step, stitching longer and longer pieces from the previous reaction,” said de Vladar. “With other methods, if you want to synthesize a sequence that is double the size, it means you need double the time. In our case, synthesizing something double the size takes almost the same time.”

The short-term goal of Ribbon Biolabs is to be able to synthesize error-free DNA sequences of 10,000 base pairs. In the future, de Vladar believes this figure could be taken up to 100,000, taking us one step closer to finally being able to synthesize whole genomes from scratch.

A myriad of applications

Making DNA synthesis faster, more accurate and more affordable than with conventional chemical methods is definitely a nice concept. But will it really have an impact in biology research?

The reason why conventional phosphoramidite chemistry has been the industry standard for so long is that it does a good job at synthesizing short DNA sequences, which currently makes up most of the demand within the DNA synthesis market.

“It’s not that old technologies will be displaced. You still need to produce primers, you still need to write small-length DNA. Maybe for these kinds of things, the chemical approach is the right one,” said de Vladar.

There seem to be unlimited applications for new DNA synthesis technologies. They could be used to design antibody drugs, to develop diagnostic tests, to engineer microorganisms for industrial production, to improve crops, produce textiles, recycle waste, decontaminate polluted environments, you name it.

In recent years, DNA providers such as Twist Biosciences have significantly driven down the price of custom DNA. As new technologies enter the market and the price of DNA synthesis keeps going down, researchers will be able to design and carry out more and more complex experiments. Areas of research that could particularly be impacted are metabolic engineering, synthetic biology, genome editing, or systems biology.

“There is this quote from Nobel prize winner Richard Feynman I like coming back to: ‘What I cannot create, I cannot understand,’” said Gariel. “Once we can start printing whole genetic pathways, whole chromosomes and even whole genomes, we can start understanding biology as a whole, as a system.”

DNA synthesis could also unlock new applications that don’t even exist yet. One of the most promising on the horizon consists of using DNA for data storage.

“The amount of digitized information there is in the world now is so large that it’s almost impossible to imagine how we could store that information on silicon-based technologies,” said Paul Freemont, Professor at Imperial College London and director of the UK Innovation and Knowledge Centre for Synthetic Biology, also known as SynbiCITE.

Firms such as Microsoft have seen the potential of this application and are actively researching DNA data storage methods. Fast, accurate, and especially cheap DNA synthesis will be essential to scale DNA storage to the level where it can replace silicon microchips.

Ultimately, Freemont believes that DNA synthesis is one of the pieces that will enable the transition from an economy based on petrochemicals to one based on biology. “In the future, the manufacturing and production of almost everything will have to be done using biology,” Freemont explained. “There’s going to be a transition to a more circular economic model. Biotechnology will become much more pervasive and much more compelling because it is more in line with sustainable models of production.”

“The petrochemical economy has reigned for over 100 years. Biology is going to be the economy of the next 100 years.”

Up to 500 new jobs as Lilly invests $2.1B in new manufacturing sites