The history of modern biotechnology began around four decades ago with the invention of genetic engineering. Genentech, one of the fundamental companies in this field, set many trends for modern biotech companies today.

However, modern biotechnology involving genetic engineering and cell manipulation, has been with us for roughly four decades. It was kickstarted in 1973, when scientists first genetically engineered Escherichia coli bacteria to introduce a foreign gene that made them resistant to an antibiotic.

To achieve this, the researchers employed a process called recombination, which consists of using proteins called restriction enzymes to cut bacterial DNA. The enzymes left uneven cuts on the DNA chain where foreign DNA could be inserted. The bacteria would then start using the new genetic information as if it were its own.

This new technology had the potential to revolutionize the way that we produce biological molecules. Instead of inefficient traditional methods such as extracting them from plants and animals, you could cheaply mass produce your desired molecule in fermentation vats of microbes. 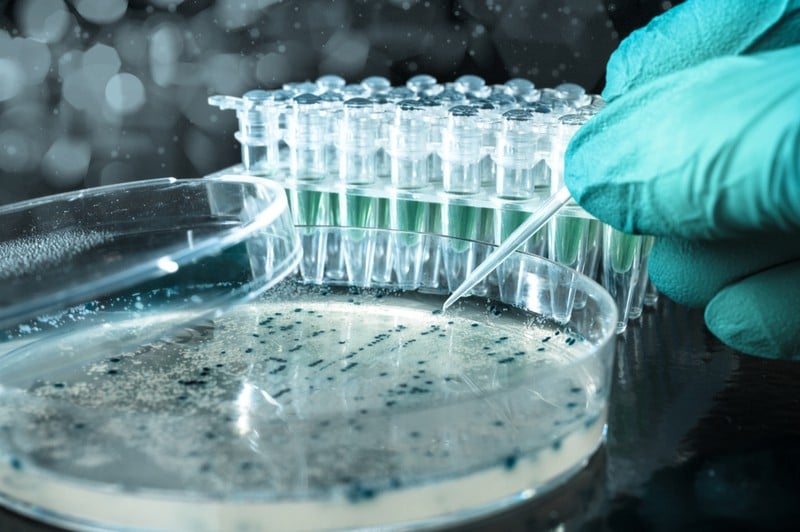 However, to get the revolution going, the technology needed to reach the market. In January 1976, one of the scientists behind the study, Herbert Boyer, received a phone call. It was from a young venture capitalist called Robert Swanson, then a partner at the firm Kleiner & Perkins. Swanson was enthusiastic about the commercial potential of the recombinant bacteria and persuaded the reluctant Boyer to meet up for a few minutes.

The meeting ended up lasting for hours, with Swanson convincing Boyer to found a company. The two made an initial agreement to invest $500 each (the equivalent of around €1,500 today). Boyer also came up with a name for the company: Genentech, derived from the words genetic engineering technology.

Genentech was founded on April 7th, 1976 with no assets, equipment, or even a secretary. Despite these humble beginnings, the company was able to use recombinant E. coli bacteria to produce a human protein, somatostatin, as a proof-of-concept in 1977.

Two years later, the company used this technique to produce the human hormone insulin, which was a huge breakthrough. Previously, big pharma Eli Lilly had been harvesting animal versions of the hormone from cow and pig pancreases.

After this success, Genentech became the first biotech company to go public, raising $35M on its IPO (equivalent to around €100M today) in 1980. After many years of getting drugs to the market, the company was eventually acquired by the Swiss giant Roche in 2009.

Today, Genentech has over 15,000 employees. With several blockbuster drugs under its belt and a large development pipeline, the company routinely collaborates with other players in academia and industry.

Genentech’s story is only one of many biotechs that sprang up in the early days of modern biotechnology. However, the company set many precedents for the biotech industry across the globe.

With their tiny initial investments, the co-founders of Genentech set the trend for funding biotech ventures from venture capitalists. Biotechnology is a field in which both the costs and risks are high, making venture capital a common means for starting up a company.

Genentech proved such an investment could be profitable when it was acquired by Roche. Nowadays, partnerships with or acquisitions by big pharma has become the goal of many small biotech companies.

The company was also instrumental in setting up the legal landscape of biotechnology, which until then had been mostly restricted to patenting molecules found in nature. Particularly notable was Genentech’s UK fight to patent the recombinant version of a naturally-occurring protein; a case it lost in 1987.

Since that first study in 1973, the advances in biotechnology have been impressive. In addition to recombinant technology, fields that have taken off in a big way include CRISPR-Cas9 gene editing, the human microbiome, gene therapy, immunotherapy, CAR-T cell therapy, and many more. And although modern biotechnology began in the US, it quickly gained traction in Europe, where a thriving ecosystem of biotechs has made a big impact on the history of biotechnology.

The science is advancing at such a rapid pace that it is hard to predict which technologies will revolutionize biotechnology in the next 40 years, and which companies are going to arrive on the scene. It’s likely, however, that those that do thrive will be inspired to do so by pioneers such as Genentech.

Cover illustration by Elena Resko. Images via Shutterstock and Genentech. This article was originally published in February 2019 and has since been updated.