HIV research has come a long way since the virus was discovered in the 1980s. Antiretroviral therapy was a major milestone that has changed the lives of millions; the goal now is to find an HIV cure.

Back in 2008, Timothy Ray Brown was the first person to be cured of HIV. Known as the ‘Berlin patient,’ he received two bone marrow transplants from a donor who was naturally resistant to HIV to treat his leukemia. He remained off antiretroviral therapy until his death in 2020.

When the case was announced, the medical world went nuts. Had we finally achieved an HIV cure?

Unfortunately, the answer remains ‘not yet.’ Since then only two other people have been reported to remain off antiretroviral therapy thanks to a similar transplant. However, bone marrow transplants carry very high risks for HIV-positive patients, and HIV-resistant donors are rare.

These cases have been an inspiration for researchers to find better alternatives against HIV. In recent times, one of the main accomplishments has been the approval of long-lasting antiretroviral treatments that are taken every one or two months instead of daily.

There are multiple promising approaches currently in research and development to achieve a functional cure — one that leaves people living with HIV healthy and medication-free without necessarily wiping the virus completely.

An approach that is becoming popular in the fight against HIV also goes after the reservoir of HIV viruses that ‘hide’ inactive within our cells. The ‘shock and kill’ or ‘kick and kill’ approach uses agents that activate or ‘kick’ the dormant HIV reservoir, making it possible for standard antiretroviral therapy to ‘kill’ these viruses.

Gilead, one of the leaders in HIV medication, is developing a therapeutic vaccine based on this approach in partnership with the Spanish biotech AELIX Therapeutics. In March 2021, results from a phase I/IIa trial revealed that a higher number of patients treated were able to stay off antiretroviral therapy for over 22 weeks. Gilead is now testing this treatment in combination with its own experimental antiviral drug, vesatolimod.

“Developing a cure for HIV is a global priority,” stated José Luis Cabero, CEO of AELIX. “An intervention that can immunologically control the virus would be of great interest to individuals living with HIV and to the HIV research community. We have shown for the first time that a T-cell vaccine can help control HIV.”

In Norway, Bionor is testing three different strategies that could be combined to achieve a functional HIV cure. The company is developing an antibody vaccine that blocks the replication of the virus, a T cell vaccine that kills the viral reservoir, and a peptide drug candidate that interferes with the ability of the HIV virus to enter human cells.

US-based company ViiV Healthcare, which sells next-generation antiretroviral therapies, is also doing preclinical research on a similar approach to push the virus out of its reservoir. It involves a class of drugs known as IAP inhibitors that could activate hidden HIV inside infected immune cells without any major effects on other healthy cells.

What makes HIV so dangerous is that it attacks the immune system, leaving people unprotected against infections. Immunotherapy aims to boost the natural ability of immune cells to fight the virus.

The European AIDS Vaccine Initiative is testing multiple approaches to making the immune system better fight HIV in clinical trials. These include T cell vaccines and B cell vaccines that could achieve HIV remission while patients remain free of medication.

Based in Oxford, Immunocore is another player developing an immunotherapy against HIV. The company has designed T cell receptors that can seek and bind HIV and instruct immune T cells to kill any HIV-infected cells, even when their HIV levels are very low — as is often the case of the HIV reservoir cells. The approach has been shown to work in human tissue samples, and human trials will start in 2022.

Researchers in Oxford and Barcelona reported in 2017 that five out of 15 patients in a clinical trial were clear of HIV for seven months without antiretroviral therapy, thanks to an immunotherapy that primes the immune system against the virus. Their approach to a functional HIV cure combines a drug to activate the hidden HIV reservoir with a vaccine that can induce an immune response thousands of times stronger than usual.

Another approach to a functional HIV cure involves blocking the virus’ ability to replicate its genetic material and produce more copies of itself. A similar approach is commonly used to treat herpes infections; although it doesn’t get fully rid of the virus, it can stop its spread.

In partnership with the Helmholtz Zentrum München, the German firm Bicoll has developed a new class of HIV inhibitors based on fully synthetic derivatives of polyketide aurethin, a molecule that is found in Streptomyces bacteria. Although still in the early stages of development, these compounds — known by the acronym MAGIC (multiple antiviral gamma-pyrone inspired compounds) — have been found to be active against HIV-1 and HIV-2, including strains that are resistant to several HIV drugs.

“Natural products are a great source for inspiration,” said Maria Lamottke, Chair of Bicoll’s Board of Directors. “With Bicoll’s expertise in medicinal chemistry as well as in natural products, we could help [in] bringing it from the idea to the state of a preclinical, potential pharmaceutical drug.”

It is estimated that about 1% of the people in the world are naturally immune to HIV. The reason is a genetic mutation on the gene that encodes CCR5, a protein on the surface of immune cells that the HIV virus uses to enter and infect them. People with this mutation are missing part of the CCR5 protein, making it impossible for HIV to bind to it.

Using gene editing, it would, in theory, be possible to edit our DNA and introduce this mutation to stop HIV. US-based Sangamo Therapeutics tested this approach a decade ago by extracting T cells from patients, editing their genome to make them resistant to attack from HIV, and reinfusing them into the patients. However, the approach obtained mixed results back in 2014. The patients had improved T cell counts but were not cured and experienced side effects from the treatment. 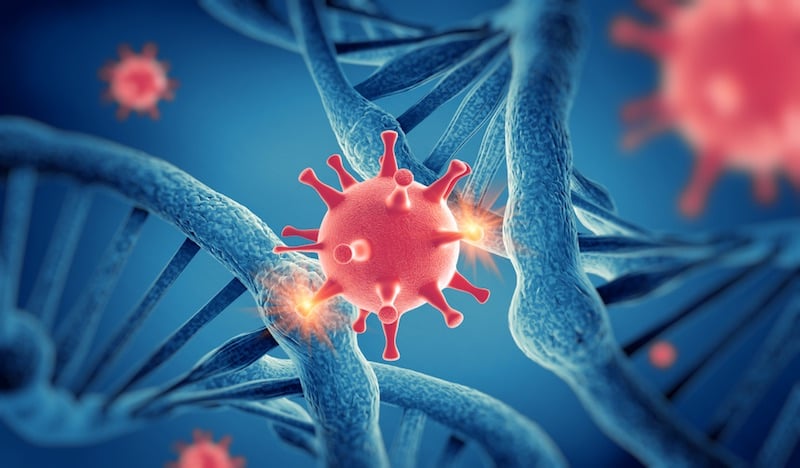 In 2019, a scientist in China revealed that CRISPR/Cas9 gene editing was used to create the world’s first gene-edited babies. These ‘CRISPR babies’ carry the CCR5 mutation to protect them against HIV infection. However, scientists around the world have questioned the ethics of altering human DNA without fully understanding the possible consequences. Indeed, there were follow-up studies that suggested that people carrying these mutations might be at risk of catching certain infections and dying younger.

Will we have an HIV cure?

Although there are several approaches that could eventually bring a functional HIV cure, there are still multiple challenges ahead. One of the biggest concerns around any HIV treatments is the virus’ ability to quickly mutate and develop resistance, and for many of these new approaches there is still no data on whether the virus will be able to become resistant.

So far, none of these functional cures have reached late-stage clinical testing, and several companies have dropped their HIV programs over the past few years. In addition, many HIV trials had to be stopped during the Covid-19 pandemic, delaying the progress of the whole field for multiple months.

Until a functional cure gets through clinical trials, other approaches against HIV currently in development include preventive vaccines, which so far have proved elusive. In 2021, Johnson & Johnson pulled a phase IIb vaccine study that showed limited protection. However, the company is continuing to test this approach using a different vaccine regimen in a phase III trial running in America and Europe. The European AIDS Vaccine Initiative is also running several clinical trials testing vaccines that make the immune system produce protective antibodies against HIV.

Moderna, one of the early developers of messenger RNA (mRNA) vaccines against Covid-19, began two phase I trials in January 2022 testing an mRNA vaccine for HIV.

“The phenomenal Covid-19 vaccine progress will undoubtedly yield benefit for the development of other vaccines, in terms of new technologies and capacity to develop vaccines, but an HIV vaccine remains hugely challenging, not least because, unlike most infections for which there is a vaccine, a cure remains vanishingly rare,” said Laura Waters, Chair of the British HIV Association.

Together, all these efforts are slowly increasing the range of options available to HIV-infected people while we wait for a functional cure that can make their symptoms go away without the need for medication.

This article was originally published in April 2020 and has since been updated to reflect the latest developments in HIV research. Cover illustration by Elena Resko, images via ViiV Healthcare and Shutterstock.