With dire climate change reports landing one after another in 2018 the need for sustainable, scalable, and affordable biofuels to aid in this transition to a more sustainable future has never been greater. Ticking all three boxes is no easy task, but the biotech sector has several promising solutions in development.

Producing carbon-neutral fuels from biomass or biological processes is not a new idea. Historically though, the widespread adoption of biofuels has been hindered by a few key issues that have proved tricky to overcome.

Firstly, biofuels must use raw materials that can be sourced sustainably. If you’re producing a biofuel using a crop that contributes to deforestation (think palm oil), the environmental impact may be just as bad or even worse than those of conventional fossil fuels.

But if you instead use land already earmarked for agriculture to avoid deforestation, you may end up competing with food crops, causing food prices to rise. This conundrum has made many crop-based biofuels unattractive – the advantages of the technology quickly vanish if it either contributes to further environmental damage or makes food less affordable for the poorest in society.

Secondly, in order to make a noticeable dent in global carbon emissions, biofuel production must be easy to scale up. We’ve got a tight deadline to introduce a steep reduction in the release of carbon containing gases into the atmosphere, so to have any measurable positive impact biofuels must be capable of replacing an enormous amount of fossil fuel — and fast.

Finally, biofuels must be affordable or at least have a clear pathway towards reaching affordability. Just as solar and wind power have seen their deployment boom in recent years as their costs become increasingly competitive in the electricity sector, biofuels must similarly prove their financial viability if they are to disrupt the fossil fuel dominated status quo.

This combination of obstacles may seem insurmountable, but thankfully, the biotechnology sector likes a challenge.

A biogas factory on your roof

Solaga, a spin-out company from Humboldt University in Berlin, has a radical, decentralized vision for biofuel production. Solaga is developing small scale roof-mounted systems, allowing individual properties to produce and use their own methane biogas on-site via photosynthetic cyanobacteria. 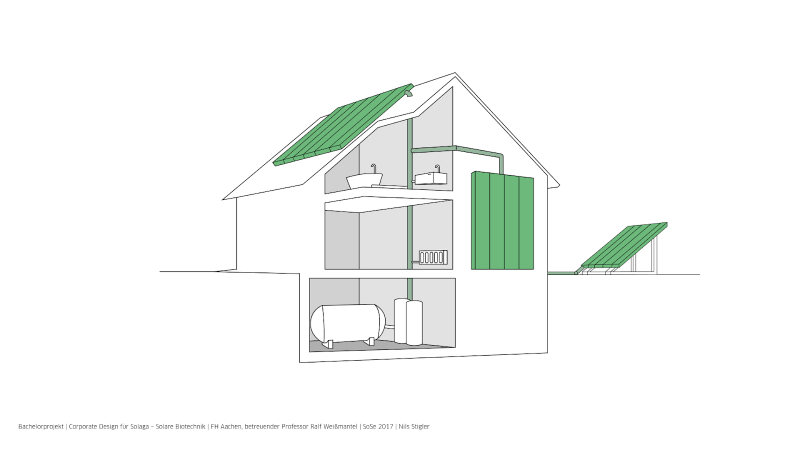 The first prototype has two stages. Stage one uses a thin film of cyanobacteria to produce organic acids, which are then fed into a biogas column. Methane producing microbes then feed off these organic acids, producing methane quickly and efficiently, Johann Bauerfeind, founder of Solaga, told me.

The system requires only sunlight, carbon dioxide, and small amounts of chemicals to function, meaning that Solaga’s living solar panels could theoretically be installed on any urban structure that has sufficient sunlight exposure. Not only would this avoid competition for arable land, but the system is easily scalable and distributable, as the number of biofilm panels can be adjusted to the area of rooftop or wall available on each site. 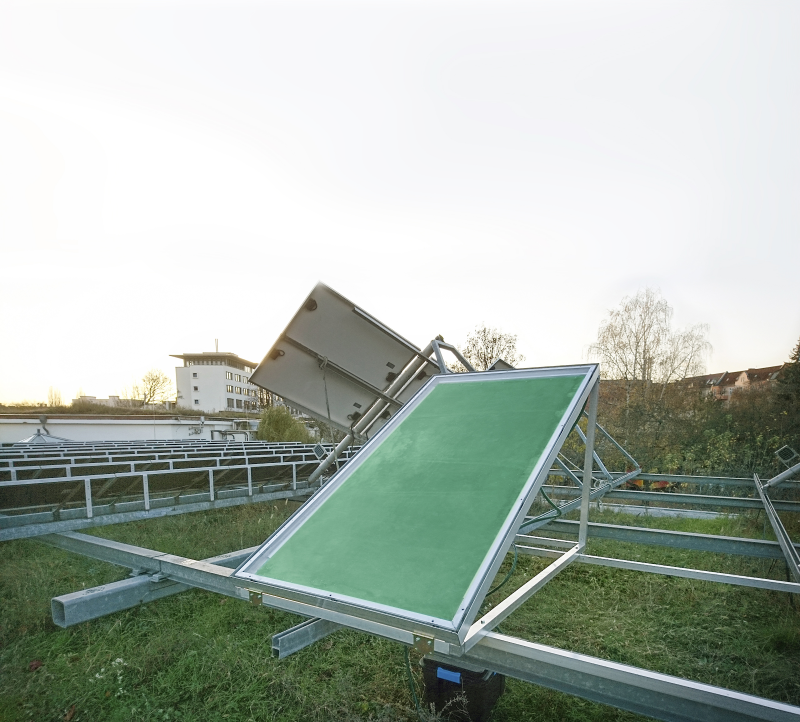 “According to our early calculations, using 50 square metres of rooftop on a single household would produce enough energy for a family of four. The biogas can be stored cheaply on site for up to a year without loss, and can be released for use very quickly,” Bauerfeind explained.

Solaga’s current focus is on improving the efficiency of their system to make it as productive and cost-effective as possible. The company aims to achieve this by optimizing the rates of carbon fixation, as well as by launching a fully automated prototype with low running and maintenance costs in the next year.

“Every square metre that we sell helps us to reach our goal of bringing affordable biogas production using rooftop biofilms into reality,” noted Bauerfeind.

As well as requiring large areas of land, the production of conventional biofuels such as bioethanol also consumes huge volumes of freshwater — over 2,000 liters for every liter of bioethanol produced. With freshwater already a precious resource that will only become scarcer this century, the idea of producing biofuels using seawater instead, which is effectively unlimited, has gained increasing attention.

In 2018, scientists from the University of Nottingham detailed a new method for bioethanol production that requires neither agricultural land nor freshwater, but only seawater, marine biomass (such as seaweed), and a new strain of yeast isolated from seawater in the UK.

“I found this strain to be highly efficient in bioethanol production and able to tolerate high salt concentrations,” said Abdelrahman Zaky, who lead the research. “It is a perfect strain for the industrial production of bioethanol.” 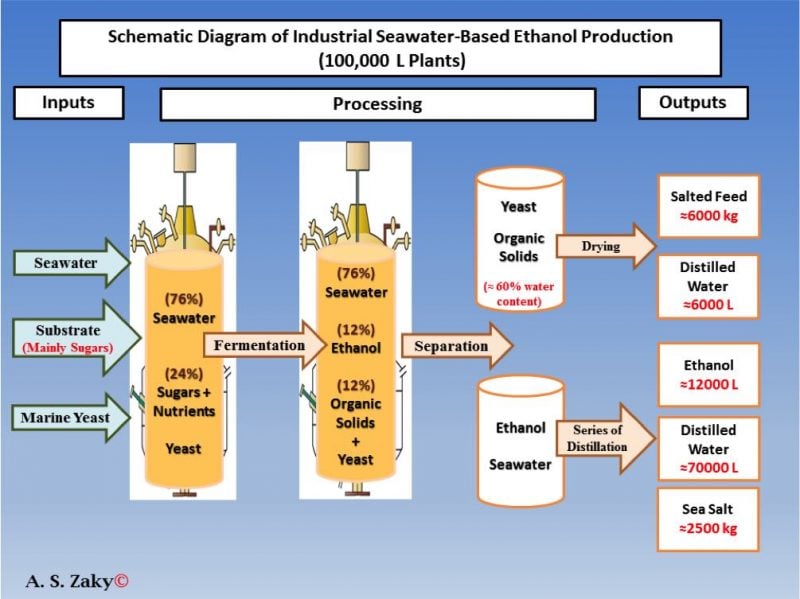 Marine fermentation is especially promising as the process can be easily adopted by the bioethanol industry, since it requires only small modifications to existing bioreactors. This gives it great potential for rapid deployment and scale-up.

“All global liquid transportation fuel can be theoretically produced taking into account the huge reserves of seawater and the massive area of the oceans and seas that can be used for producing biofuel,” Zaky explained.

Algae are some of the planet’s most prolific devourers of carbon dioxide. A large proportion of the Earth’s fossil fuel reserves derive from ancient algae that fell to the sea floor, accumulating for millions of years until humans began to extract and burn these fossilized organisms, releasing the stored carbon in the process.

Spanish biotech AlgaEnergy aims to harness the eons of experience that algae have in fixing carbon, and by giving them a genetic boost, turn them into a super productive platform for sustainable biofuel production.

The Genetdiesel project, which began in 2010, has had some remarkable successes. The team developed microalgae strains with double their natural lipid concentrations, which has led to a one-third reduction in the cost of the resulting biofuel since the project began.

“Genetdiesel… sought to select the most efficient microalgae strains that, through genetic engineering, would be able to increase their capacity to produce lipids or carbohydrates suitable to be converted into biofuels,” said Carlos Rodríguez-Villa, General Manager of AlgaEnergy.

The microalgae are cultured outdoors, in rows of tubular photobioreactors designed to maximize photosynthesis while also giving AlgaEnergy control over key parameters like pH and temperature.

“For each kilogram of biomass that is produced, up to two kilograms of carbon dioxide have been consumed in the process,” explained Rodríguez-Villa. 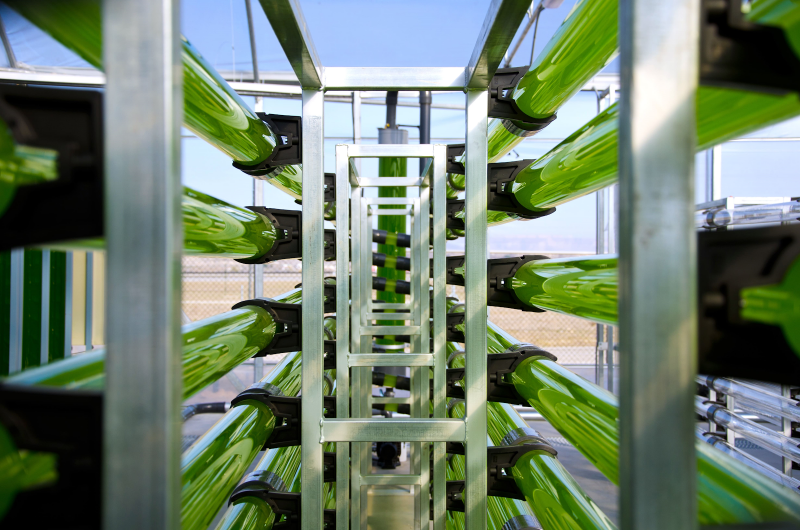 AlgaEnergy’s technology passes several key tests: no agricultural land is needed, production is highly efficient (they can even use emissions from other industries to grow the microalgae), and the biofuel end product is high-grade. But, as Rodríguez-Villa explained, further optimization is still needed to reach commercial viability.

“Although we have already obtained high-quality biofuels that are efficient, convenient to current engines, clean and inexhaustible. It will take a number of years to reach profitable microalgae-based biofuels, as an important cost per kilogram reduction is still required.”

Innovative biotechnology has breathed new life into the development of advanced biofuels. There is still much R&D needed before these methods can be used on a large scale. However, these novel approaches and others like them have shown that it is possible to mitigate biofuels’ past challenges such as sustainability and affordability, and potentially sidestep them altogether.