Poland might not be the first place you associate with biotech, but the country is becoming an emerging hotspot for pharmaceutical companies and biotech startups.

Although Poland has a very strong scientific base in life sciences and medicine, it has not developed a vibrant biotech or medtech sectors. Until recently, no truly innovative products from Poland have been introduced to the global market. The pharmaceutical industry has traditionally been based on generic products and, more recently, biosimilars. But the last decade has brought some positive changes and advancing innovation that are starting to snowball.

Traditionally, generic companies such as Adamed and Celon Pharma have been increasingly interested in innovative drug discovery, which has driven a number of IPOs since 2011. Medicalgorithmics,  which develops mobile cardiac telemetry, and Selvita, which focuses on small molecule drug discovery R&D and service company, both successfully went public initially on NewConnect and later on the Warsaw Stock Exchange main floor.

These Polish pharmaceutical companies are continuously growing their product & service sales globally, and they’re now each valued at €200-300M. As additional companies including Mabion and Celon had successful IPOs, the investors are starting to recognize the potential of big returns from this high-risk sector.

With the success stories of the first handful of biotech and medtech companies, dozens of new start-ups in the life science sector have been founded and are now raising private capital. This private funding could also attract larger amounts of non-dilutive grant funding, coming primarily from the European Structural and Cohesion Funds, of which over €6B has been earmarked for innovative R&D projects until 2023.

Established in 2012, one of the new start-ups is OncoArendi Therapeutics, which is dedicated to discovering, developing and commercializing novel small molecule therapeutics for neoplastic and inflammatory diseases. The company has so far been able to raise over €30M of private and public financing and is currently advancing four small molecule drug discovery programs towards clinical trials.

The company was founded by two senior researchers in medicinal and developmental chemistry with over 20 years of experience in large biotech and pharmaceutical companies in the US and a local entrepreneur who founded a medicinal chemistry CRO TriMen Chemicals. They then joined forces with an internationally recognized Professor of Immunology at the Medical University of Warsaw, and a serial entrepreneur in life sciences with a successful IPO history.

Apart from the dynamic growth of the sector and hundreds of high-skill jobs created, some of these companies have brought returns of ten to a hundred times on original investment as a result of higher trading volumes on the Warsaw Stock Exchange and some partial or full exits.

Moreover, companies like Selvita, Mabion, Celon Pharma or Medicalgorithmics have proven that they can make profitable deals with global pharmaceutical companies: Selvita closed a €100M licensing deal with Menarini Group in March 2017, and Medicalgorithmics recently purchased two US centers for monitoring, sales and distribution.

Not to be neglected is the reversal of the brain drain of Poland’s educated and highly skilled workforce, which has continuously been a problem for central and eastern Europe. OncoArendi has grown from fewer than 30 to over 60 employees in just over a year, as the company has been able to attract other experienced R&D leaders for key positions, for instance, in preclinical oncology.

Even more exciting is the number of young people coming to work at OncoArendi after postdocs at many prominent universities in the United States and Western Europe, such as Columbia, Cornell or Caltech, as well as universities in Basel, Edinburgh & Vienna. Many of them have been co-authors on publications in high-impact scientific journals such as Science and Nature.

An important factor is also the progressing degree of internationalization of research and business development at these new biotechs. OncoArendi currently employs nationals of four different countries and is looking to expand that by two other international candidates at key positions. This cultural and educational diversity is a desirable element for continued growth and global success.

So why are many young and experienced Poles excited to come to work at a young Polish biotech company, while passing on an academic career path in the US or some attractive offers from big pharmaceutical companies? It is certainly not the compensation levels, as those can be even 3-4 times lower than in a large pharma company. That said, the purchasing power equation is still very favorable in Poland, so that lower incomes in nominal terms can actually assure a relatively high standard of living.

It seems that there are several factors that may be more important: they build up to working in a dynamic, friendly and exciting environment on scientific challenges that are truly new and moving into yet uncharted territories of exploration, as well as the feeling of empowerment and ability to make a difference.

In the case of OncoArendi, its cancer immunotherapy and a novel therapeutic approach for pulmonary diseases based on a group of recently discovered chitinase targets seem to provide room for continued scientific exploration and high market potential at the same time. But at the end of the day there is hope to contribute to something very tangible – a molecule with potential to save patients’ lives all over the world.

And finally, from the investors perspective: why can the biotech sector be a very interesting investment target? There are several reasons, but the main ones include the well-educated pool of young researcher talents that provides a solid base for company growth, abundance of non-dilutive funding to leverage private capital in progressing high-risk projects, and overall lower costs of doing research.

All these factors combined allow a Poland-based small biotech company like OncoArendi, or a medium-size enterprise like Selvita, to reach Phase II clinical trials with a small molecule asset for 1/5 to 1/7 the private capital compared its US competitors. That amounts to five more shots on goal in a football match! And that’s pretty good odds for a victory. 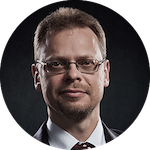 Marcin Szumowski is President & CEO of OncoArendi with over 15 years of experience in tech transfer, R&D project and life science investment management. He has founded and/or managed several startups including Medicalgorithmics, listed on the Warsaw Stock Exchange.