With last month’s FDA approval, Ocrevus (ocrelizumab), became the first drug for primary-progressive multiple sclerosis. Roche may be the first, but others in the biotech community are also working hard to bring their own therapeutics for the disease to market.

Multiple sclerosis (MS) is an autoimmune disease that affects the nervous system, and around 2 million people around the world live with this condition. Most people have the relapsing form (RRMS), which is marked by periodic inflammatory attacks, followed by phases of partial or complete recovery.

While a number of effective treatments already exist for RRMS, other than the newly approved Ocrevus, people with the progressive form the disease have few options. “We’ve been waiting a long time, because there are about a dozen treatments for people with relapsing MS, but for people with progressive MS, up to now, there hasn’t been anything,” says David Schley, MS Society UK’s Research Communications Manager. “It’s very exciting because it’s the first licensed treatment for primary progressive MS—we’re obviously keen now to see the same decision in Europe.”

Ocrevus can treat both RRMS and the PPMS, but its clinical benefit for the progressive form is “modest,” Bruce Bebo, executive vice president of research at the National Multiple Sclerosis Society, told STAT News. But its impact is “huge,” he added. While Ocrevus is a game-changer, there’s certainly still room for improvement. Here’s an overview of the some of biotech’s current efforts to make new and improved MS drugs available to patients. 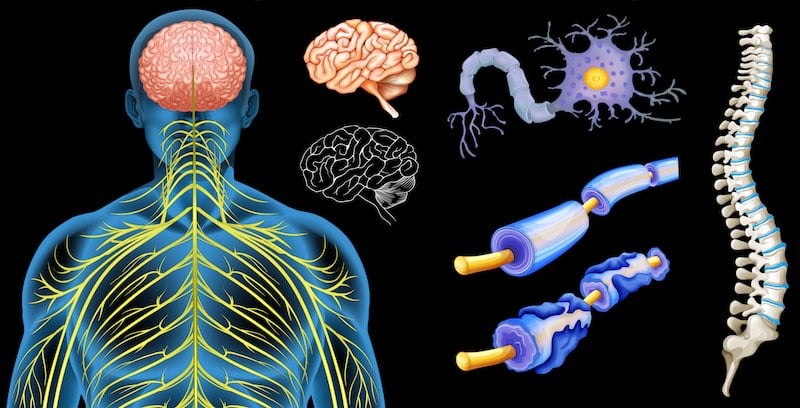 Ossianix is developing a way to deliver biologicals, such as antibodies, directly to the brain. “None of the [currently available] agents, including the Roche compound, have significant penetration of the blood brain barrier,” says Frank Walsh, the CEO of Ossianix. “So although you can stop the flare up of the disease by damping down the immune system in the periphery, you don’t stop the ongoing disease in the brain.”

To get around this problem, Ossianix has created products that use a “Trojan horse” approach. It hinges on fusing antibodies to a shark-derived antigen receptor (VNAR) that targets the transferrin receptor on the blood brain barrier (BBB), allowing the therapeutic to essentially piggyback through the receptor into the brain. In January, the biotech received a milestone payment form the Danish pharma, Lundbeck, to develop this technology.

Currently, Ossianix is conducting preclinical tests of antibodies against CD20 and B cell-activating factor (BAFF), which they hope will eventually help treat progressive MS. In addition, Walsh adds, “We’re getting a lot of interest from major companies in the field who have antibodies of their own for MS and other indications, and they want to use this as a means of delivering high levels of therapeutics to the brain.” 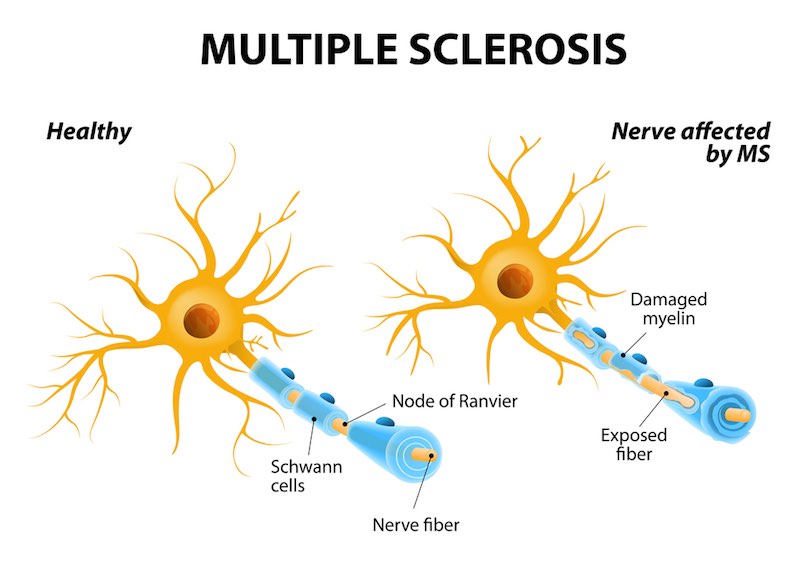 Though significant progress has been made in developing therapies for MS, the underlying cause of the condition is still a mystery. One potential explanation may be that people with MS have ancient viral genes in their DNA.

“It turns out that around 8 percent of our genes are not human in origin—these are viral genes that we’ve inherited,” explains Robert Glanzman, the CMO of the Swiss biotech, GeNeuro. “Our primate ancestors were infected with viruses, and if those viruses infected a germline cell, like an egg, and that offspring survived, those viral genes became incorporated into their genome and passed down to us.”

“Our strategy is that we have a monoclonal antibody, GNbAC1, which directly binds to the surface subunit of this protein, the part that binds to TRL4,” says Glanzman. “And we have shown that by doing that, we’re blocking its ability to activate microglia and macrophages, and also blocking—and we’ve shown this both in vitro and in vivo, in animal models—its inhibition of remyelination.”

In December 2014, GeNeuro received €37M in funding from the French pharmaceutical company, Servier. Together, the companies are testing GNbAC1 in a Phase IIb clinical trial. “If we have positive phase IIb data, it’s going open a whole new area of scientific research that people have not really been focusing on up to now, which is these endogenous retroviral genes and the proteins that they can potentially encode,” Glanzman tells us. “It could really be the beginning of a brand-new area of scientific research.” 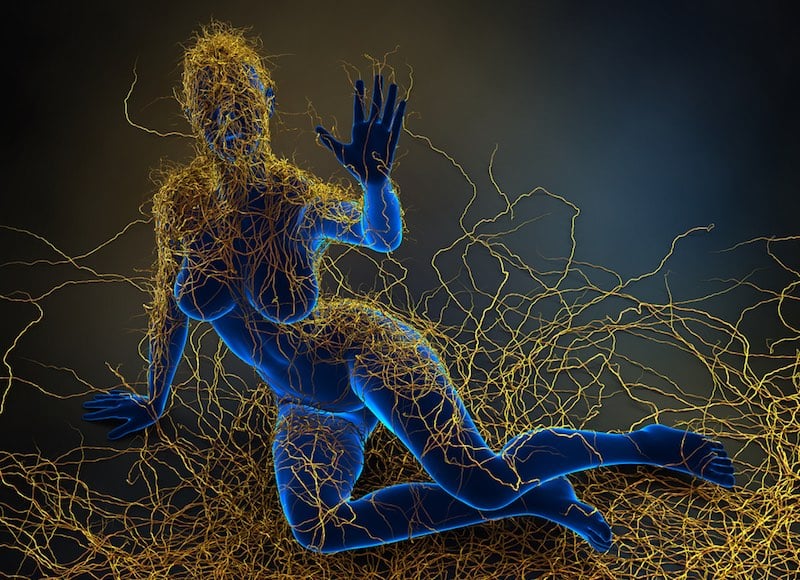 Many biotechs want to address a huge unmet need in MS treatment: remyelinating nerve cells that have been demyelinated. “I think the first treatment for myelin repair would be a game changer,” Schley says.

Like GeNeuro, biotechs are tackling this problem in unique ways. MedDay’s MD1003, a highly concentrated vitamin (biotin), activates enzymes involved in the Krebs cycle and the fatty-acid synthesis required for myelin production. The results of a Phase III clinical trial demonstrated that the drug was capable of reversing the progression of progressive MS, and last year, the company raised €34M to conduct a second Phase III trial in the US.

In addition, the MS Society is currently funding investigators who are looking for ways to induce remyelination. Researchers at the Cambridge Center for Myelin Repair and the Edinburgh Center for MS Research previously discovered RXR-gamma, a molecule that can promote myelin repair through the brain’s own stem cells. “We have now taken this forward into a phase II clinical trial,” Schley says.

“I think getting areas of demyelination to remyelinate is the holy grail of the whole field,” Walsh tells Labiotech.eu. 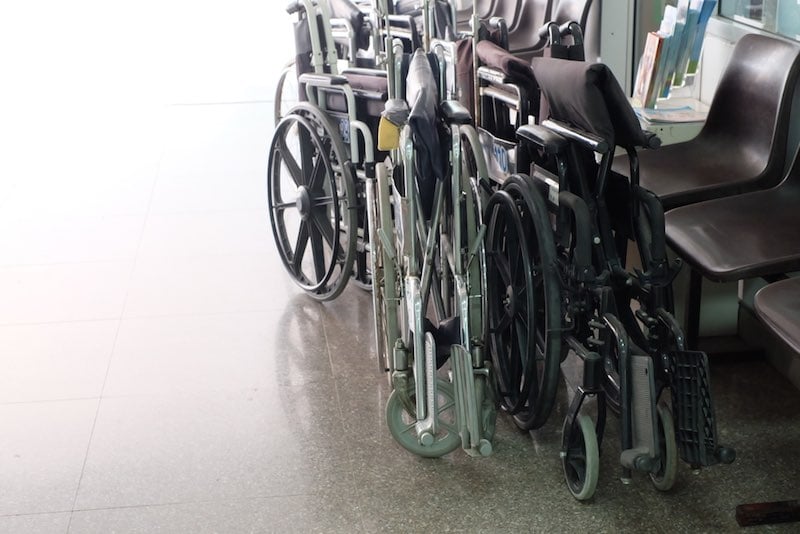 Finally, there’s a lot of good drugs for RRMS on the market, but some companies, like Biogen and Actelion are trying to make them better.

Biogen, one of the giants in the MS field, has a new antibody, Zinbryta (daclizumab), that is close to becoming available to patients. In a Phase III clinical trial, it reduced relapses by 45 percent compared to Avonex, a beta interferon, and 54 percent against a placebo.

Actelion, which was recently acquired by Johnson & Johnson for €27.9B, has a bit of a different approach. “We have the ideal drug, ponesimod, which can be used in combination,” Actelion CEO Jean-Paul Clozel told Bloomberg last year. “It’s a very busy market” but with one out of five patients relapsing each year, there is a need for more effective therapies, he added. The company is currently testing the first oral combination therapy of ponesimod, an immunomodulator, and dimethyl fumarate (Tecfidera) in a Phase III clinical trial.

Roche’s achievement of FDA approval for Ocrevus was a big moment for the MS field. But there’s a lot of exciting new developments coming down the pike, as multiple groups attempt to improve treatments for both relapsing and progressive MS, and even try to reach the ultimate goal—remyelinating neurons in patients with the all forms of the disease.

“I think people with MS have reason to be optimistic,” Glanzman says. “I think that scientific research is getting better and better every day.”