Stem cells are recognized for their therapeutic promise in regenerative medicine, but did you know that they’re also being used to save endangered species?

Four hours north of Nairobi, closely safeguarded by armed security, the last remaining northern white rhinoceros are waiting for extinction. Only two animals are left, both of them living in a 700-acre enclosure within the Ol Pejeta Conservancy Park: a 27-year-old female, Najin, and her 16-year-old daughter, Fatu. Heavy poaching diminished their number to just two females, meaning the species is functionally extinct.

The last successful birth of a northern white rhinoceros was in 2000, with all following reproduction efforts in captivity staying unsuccessful. Reproduction is sadly out of reach for the last two animals.

The sad truth is that many more species will share this dark prospect with the two rhinos. With largely human-made threats ranging from excessive poaching, loss of habitat, climate change and disease, many species are simply not capable of adapting fast enough to endure the ever increasing environmental pressure they are facing. The IUCN Red List of Threatened Species is providing detailed information on the conservation status of endangered species for the past 50 years.

Currently it is listing 11,534 vulnerable, 8,278 endangered and 5,483 critically endangered species, with prominent examples such as the eastern gorilla, the cheetah and the giraffe. Similar to the northern white rhinos’ situation, even the most ambitious conservation efforts will come too late for many of them. Conventional conservation strategies, including breeding programs in the wild or in captivity often remain ineffective (especially in captivity) and facilitated methods such as in vitro fertilization have not been achieved or even tried in most species.

An additional lack of knowledge about the reproductive cycle of most animals makes any breeding efforts a difficult undertaking. And even if breeding efforts were successful, the low diversity in gene pools of bred populations, together with the shrinkage of natural habitats would make the successful establishment of a self-sustaining population extremely difficult.

Amidst this dark prospect, recent milestones in stem cell and reproductive technologies spark new hope among scientists. In November 2016, a group of scientists under Katsuhiko Hayashi at Kyushu University in Japan achieved one of the holy grails in reproductive biology: engineering artificial egg cells from reprogrammed mouse skin cells, entirely in a dish.

The foundation for this success originates in earlier work that Hayashi did as student, where he succeeded in converting reprogrammed stem cells into primordial germ cells , the precursor cells for both sperm and egg cells. When injected into ovaries or testis of living mice these artificially derived cells gave rise to fertile sperm and egg cells.

Now leading his own lab, Hayashi proved that the last maturation step in a living mammal is in fact not necessary and can be completely achieved in vitro. The artificially derived egg cells were successfully used to give birth to pups which themselves were healthy and fertile. With a similar strategy, Chinese researchers recently announced the generation of rudimentary sperm cells in a dish.

With the prospect of reconstituting the entire male and female germ line cycle in a dish, scientists hope to translate this success story to other fields of public interest. While some dream of the eradication of human infertility and the possibility of offspring for same sex couples, it also offers a completely new avenue for species conservation and with that the rescue of the northern white rhino.

Zoo Dvůr Králové in the Czech Republic – the official owner of the last two northern white rhinoceroses – has now assembled a consortium of mostly European research institutions to make the impossible possible. Members include wildlife and reproduction biology experts from the Leibniz Institute for Zoo and Wildlife Research in Berlin (IZW), stem cell experts from the Max Delbrück Center for Molecular Medicine in Berlin (MDC), the Helmholtz Institute of Stem Cell Research in Munich (ISF), Dr. Hayashi’s lab in Japan, as well as Avantea, an Italian biotech company specialized in Assisted Reproduction services.

Under the title, “Conservation by Cellular Technologies,” the consortium members released an ambitious road map plan early in 2016, where they sketched out a dual strategy, involving both the collection of natural gametes and – inspired by Hayashi’s success in mice – the generation of artificial ones.

For the collection of natural gametes first trials have been pursued in the closest relative of the northern white rhino, the southern white rhino. By now, oocytes from several females have been successfully retrieved by Thomas Hildebrandt, Head of the Department of Reproduction Management at the IZW. The collected eggs were then shipped to Avantea, an Italian company with renowned expertise in cloning and assisted reproduction of large animals such as horses, cattle and pigs.

The collected eggs were fertilized and successfully developed into early embryos ready for transfer into potential surrogate animals. The first results were presented in March 2017 at a meeting of the European Northern White Rhino Working Group at Zoo Dvůr Králové and showed that collection of eggs via a technique called ovum pick-up was possible in southern white rhinos.

Since then, hybrid embryos from southern white rhino eggs and northern white rhino sperm have been created and frozen, which researchers believe could lead to healthy offspring if implanted into a surrogate mother. The team also hopes to extract eggs from Najin and Fatu in the future and use a similar technique to create viable embryos, but the genetic diversity of such embryos is likely to be poor.

Stem cell experts from the MDC Berlin and the Helmholtz Institute in Munich are working closely together with Hayashi to develop an alternative to this first strategy by attempting the production of artificial gametes. For this, the scientists rely on frozen tissue that was collected from eleven deceased northern white rhinos and is now stored at zoological biobanks, primarily at the San Diego Zoo and the IZW.

Similar to mouse and human cells, rhino adult cells can be converted into induced pluripotent stem cells (iPSCs), thereby providing a potentially indefinite source of artificial rhinoceros gametes. he scientists are working on differentiating the iPSC lines into primordial germ cells, which may then be matured into egg and sperm cells.

With the consortium road map underway, how realistic is the rescue of the northern white rhino? According to Hildebrand , the first delivery of a northern white rhino may be possible within the next decade, assuming the outlined approach proves fruitful. This groundbreaking work would not only be the last chance to save the (sub)species of northern white rhinos but would also shift paradigms as to what is currently considered possible in today’s species conservation. 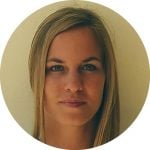 Christina Galonska studied Cell Biology and Molecular Medicine with special focus on Stem Cell Research and Epigenomics. During her PhD she worked at the Harvard Stem Cell Institute und Broad Institute in Cambridge, USA. She previously worked as a postdoc at the Max Planck Institute for Molecular Genetics in Berlin, before joining Bayer as a researcher this year.

This feature was originally published on 11.5.17. It has since been updated to reflect the latest developments.