Each day more than one million people around the world acquire sexually transmitted infections, with a profound impact on sexual and reproductive health across the globe. Biotechs across Europe are developing rapid diagnostics for some of the most common STIs.

It’s difficult to comprehend the sheer scale of the number of people affected by sexually transmitted infections (STIs). More than 30 different bacteria, viruses, and parasites are known to be transmitted through sexual contact. For example, each year around 357 million people worldwide become infected with either chlamydia, gonorrhea, syphilis or trichomoniasis.

While each of these infections can be treated, rates of infection continue to rise. Between 2013 and 2017, diagnoses of gonorrhea rose by 67% in the US. Researchers across Europe believe that one of the reasons these infections are spreading so rapidly is because the currently available diagnostics in hospitals and clinics are inadequate.

“There’s clearly a failure in being able to find these people who are positive, and treat them quickly,” said Anna Dixon, Chief Technology Officer at UK-based binx health, a spin-out from the University of Bath. “The obvious problem with STIs is that they can spread around fairly easily, so a fast diagnosis is important. But traditionally if someone goes for an STI test, it can take 4-7 days or even longer to get the result.”

binx health and others are looking to introduce new ultra-rapid diagnostics for some of the most common STIs, which can achieve a diagnosis in as little as half an hour, meaning that patients can obtain a test result and commence treatment, all in a single visit. This is particularly important as untreated STIs can become chronic and lead to a variety of health concerns, from pelvic inflammatory disease and infertility in women, to heart disease and even infertility in men.

binx has developed a small desktop platform that uses disposable cartridges to process and extract DNA from either urine or vaginal swab samples. Their current diagnostic is a dual test for both chlamydia and gonorrhea, which returns a result in about thirty minutes.

The test exploits the latest advancements in a commonly used laboratory technique known as polymerase chain reaction, or PCR, which can locate tiny amounts of bacterial DNA in a sample, and produce multiple copies of it until there is enough for analysis and detection.

“We have developed the test to provide clinical performance equivalent to a central lab test,” Dixon told me. “But it’s much faster because everything from the DNA extraction to detection is all completely automated within a single device. Conventionally, samples have to be sent off to a central lab, batch tested, then the results would have to be logged, sent back to the clinic, and then the clinician has to get the patient back for another appointment. That all takes time.”

binx aims to initially get approval for its chlamydia and gonorrhea test in the US, before later targeting the UK and European markets. The company is also looking to expand the test to detect two more increasingly common STIs — mycoplasma genitalium and trichomonas vaginalis. 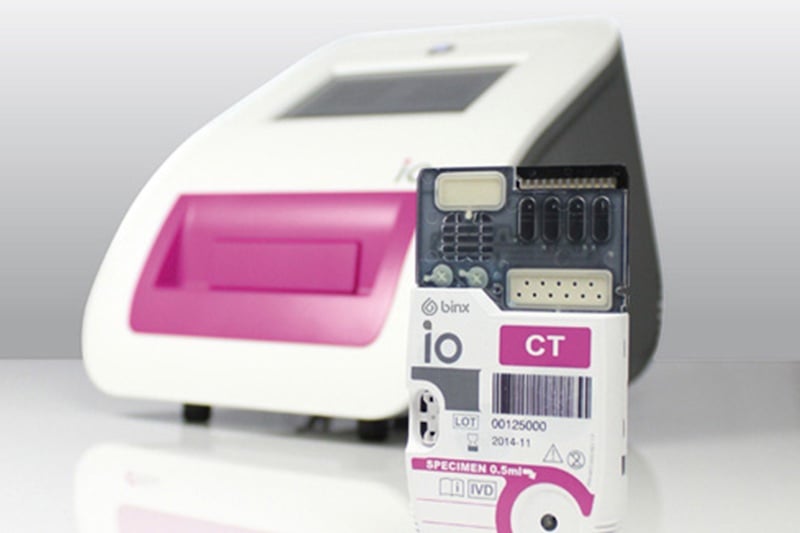 binx’s diagnostic platform is mainly aimed at clinicians, However, other biotechs, such as Estonia-based Selfdiagnostics are targeting patients themselves, to try and combat some of the shame and embarrassment that prevents many people from going to get tested. Selfdiagnostics uses a much faster form of PCR to test for chlamydia and gonorrhea, which allows users to obtain a diagnosis in just 40 minutes in the comfort of their own home.

“Most STIs are asymptomatic, and so people postpone doctor’s visits because they don’t want to think about having an infection,” Marko Lehes, CEO of Selfdiagnostics, told me. “But if people can test themselves privately, they’re definitely willing to purchase a test to see if they’re infected. There have been previous home-use STI tests, but the accuracy is really poor, around 50%. Our accuracy is up there with centralized labs, because we use the standard molecular diagnostic technologies out there, but we’ve optimized it into a small, easy-to-use device.”

Selfdiagnostics are also hoping that their technology can improve STI testing in the developing world where infections tend to spread particularly rapidly because access to affordable diagnostics is poor. “In many countries across Asia and Africa, there’s little access to centralized labs because of the cost of building that infrastructure,” Lehes said. “So there’s a huge unmet need which we’re looking to fill.”

One of the biggest concerns within healthcare in recent years is not just the growing prevalence of STIs, but the emergence of new drug-resistant infections. Since 2018, patients in the UK have been diagnosed with a form of gonorrhea resistant to both first-line treatments for the infection – the antibiotics azithromycin and ceftriaxone.

“The only option then for these people is intravenous antibiotics, which are only used in the most severe infections,” explained Colin Denver, CEO of UK-based biotech SpeeDx. “They are almost the last line of treatments, which is the really scary thing.”

SpeeDx is developing diagnostics which can detect mutations in bacterial DNA that allows clinicians to identify whether infections such as gonorrhea or mycoplasma genitalium are resistant to current antibiotic treatments. This is important as clinicians will sometimes treat patients empirically – giving them antibiotics based on their symptoms rather than waiting for a diagnostic. But if the patient is already infected with a drug-resistant strain, such treatments will not work.

Because these tests amplify DNA to such an extent that they can detect single base changes in the genome, they can also help identify whether patients have strains of these infections that are known to still be susceptible to older antibiotics.

“There’s an antibiotic called ciprofloxacin which used to be used for gonorrhea but it was abandoned ten years ago due to a rise in resistance,” Denver commented. “We’ve been able to identify some highly predictive biomarkers, and if our tests identify these, there’s a high likelihood that ciprofloxacin will cure the patient. So this gives doctors more options.”

Because there is a huge unmet need for new, rapid diagnostics across the whole spectrum of infectious diseases, these biotechs are also aiming to apply their technology to other infections, outside of the realm of sexual health.

Selfdiagnostics plans to develop rapid diagnostic tests for common strains of influenza and tuberculosis, with the aim of marketing them at low prices to hospitals and clinics across the developing world. For binx health, the high profile rise in hospital-acquired infections in recent years means there’s a great need for tests which can return a diagnosis in minutes rather than hours.

“Our absolute focus right now is on STIs, but our platform can take a whole range of sample types, and if you can extract DNA from something and amplify it, then we can detect it,” Dixon told me. “It could also be used to diagnose a number of infections where being able to get results quickly is hugely important.”

The speed, accuracy and convenience of the new diagnostic technology are certainly promising at a time when drug-resistant infections such as gonorrhea are on the increase. It will be interesting to see if decreasing costs allow such technology to reach those who really need it and help them to get the treatment they need.

David Cox is a science and health writer based in the UK. He has a PhD in neuroscience from the University of Cambridge and has written for newspapers and broadcasters worldwide including the BBC, New York Times, and The Guardian. You can follow him on Twitter @dcwriter89.