What if we could send the body an instruction to produce its own drug? That’s what messenger RNA (mRNA) could achieve. A whole new area of therapeutics could be opened. Let’s try to get an overview of how…

So for those who don’t know what a mRNA is, here are some basics. This diagram below shows the transcription/translation mechanism in protein synthesis that occurs in Eukaryote cells, where mRNA plays a crucial role. There’s a more detailed artist’s impression on this process by the Wellcome Trust here. 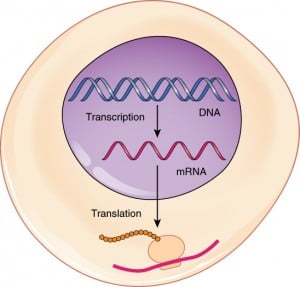 The first therapeutical description was back in 1992, which considering how major mRNA is to understanding Cellular biology today, is surprisingly recent. So this is a very fresh sector which has been exceptional in its development, and has therefore generated a lot of excitement recently.

Targeting single molecules of mRNA before it produces proteins responsible for certain diseases is a strategy considered less dangerous than editing at the gene level (e.g. insertional mutagenesis). It is also thought this process could be better tolerated by the human body than using recombinant protein manufactured by bacteria.

That’s two reasons why so many Biotech start-ups are therefore betting on this technology. But there is still much more to this argument which we can discuss….

So how does one create therapeutic mRNA? And then what can we do with it?

Basically every mRNA project starts with a DNA sequence that is coding for a deficient protein, or an antigen produced by an infectious agent (bacteria, viruses etc.) or a tumor in the case of cancer.

Then the complementary mRNA (a copy of the strand) is produced within the cell too. This is the stage when industry competitors develop a proprietary version for therapeutic research and development, each with its unique advantages and limits.

Application of this technology can be segmented in three majors:

Using mRNA to get to the route of the problem before a protein is translated is a more cost-effective strategy compared to Cell therapies like CAR-T.  But in comparison to CAR-T, mRNA Immuno-oncology clinical trials behave toward good results rather than accurate data, but hey, it’s still early days in this clinical field!

Back to business: How is such a small molecule delivered to a patient?

The administration of the mRNA uses several techniques including injection with vectors, nebulisation in lungs or electroporation under the skin. All depends on which organ you are targeting. For example:

As always in Gene therapy, it can be viral (such as an Alpha virus) or non-viral (Liposome or cationic polymer). For mRNA, non viral vector is the big trend. There is also research into new Nanomedicine alternatives to liposome vectors, such as ‘cubosomes’, or using the silica shells of oceanic algae.

Who Moved First to Profit from this Trend’s Potential?

This is a snapshot of the three main players in the World (two German companies and Moderna from Boston in the US):

Companies such as these seem more advanced than others as they have platforms of development AND in house GMP manufacturing facilities. This naturally is attractive for potential collaborators and customers.

Asides these major players though, the rest of the field  (perhaps a dozen other Biotechs) appears still restricted to the earliest stage of development. Some just focus on delivery, which is probably the biggest challenge. But of course, there is also a lot of reward and competition over mRNA research in Academia too.

So back to our Original Question: How could mRNA Overtake Biologicals?

There are many reasons which push this technology above other biological products in its three domains, for example:

So this technology seems to have great potential, despite the relative low maturity of the technology (no products available so far). So what are the current limits?

Also an improvement that can be highlighted with this technology is the regulation of mRNA expression: While developing system close to the TET-ON system (Display in the video above), MIT has successfully controlled the expression into a cell by simply adding a small, FDA-approved, chemical molecule.

The mRNA field is very promising as it goes one step further in using the human organism to treat its illness rather than adding external product (chemical or biological). However it has many challenges, but which strategy does not?

It will be exciting to see how companies will tackle such problems (particularly delivery), and most innovation is occurring mostly in vaccine field (infectious and Immuno-Oncology) but has also nice slice to take onto therapeutics.

This is were we will see if the messenger RNA field can fulfill its promises. Medicine, after all, is all about the data.

I’m really enthusiastic regarding this technology, and you?