Robotics and artificial intelligence are rapidly changing the way we discover drugs. Martin-Immanuel Bittner, CEO and co-founder of Arctoris, discusses the benefits and challenges of introducing automation in drug discovery efforts.

The Oxford-based startup Arctoris was established in 2016 with the objective of offering remote access to automated drug discovery. At a time when researchers have been struggling to implement remote work in their labs to keep workers safe during the pandemic, the company has launched a new robotic platform that offers full automation of the drug discovery process. Martin-Immanuel Bittner speaks about the growing role of automation and remote research in drug discovery, and the main challenges to its implementation across the industry.

What led you to found Arctoris?

I qualified as a medical doctor and worked as an oncologist in Germany. Then, I moved to Oxford to pursue a PhD in cancer drug discovery. Moving into laboratory research for the first time, I was astounded to see all of these highly skilled and qualified PhD students and postdocs, spending countless hours performing experiments manually.

In my mind, all this time could instead be used thinking through their projects, discussing ideas and results with colleagues, or coming up with new hypotheses. I felt there was an imbalance between what scientists should be doing — driving their projects forward intellectually — and what they were compelled to do — spend countless hours with repetitive lab work.

Simultaneously, there were more and more reports surrounding high failure rates and lack of reproducibility in research. It became apparent that we don’t just have an outdated work mode; we have an outdated work mode in an industry that is struggling with data quality and research productivity. With Arctoris, we give researchers access to a platform where they can remotely run their experiments 24/7 using robotics to achieve higher precision and reproducibility while saving time for more creative work.

Several automation tools—like high-throughput screening—have been deployed for drug discovery before, what is different in your approach?

You are absolutely right. High-throughput screening has been around for the past 20 or 30 years and is used every day in large pharmaceutical corporations. However, these processes are linear, inflexible, running the same experiment over and over again. These robotic systems have never been designed to flexibly run different types of experiments, maybe even at the same time.

In contrast, we offer researchers access to a robotic platform where they can configure and run a broad range of assays, from cell biology to molecular biology and biochemistry. It is not just an automation island surrounded by manual work. Instead, it is about automating entire discovery processes.

What is different when an experiment is run on an automated system as opposed to by hand?

There are a few key differences. First, protocol adherence. A conventional lab protocol might say “mix the sample”—which could mean stirring, vortexing, shaking, or several other things—and which will be interpreted differently by different scientists, leading to different experimental outcomes. Instead, there has to be a well-defined process where mixing means, for example, stirring at 100 rpm for 2 minutes at 22°C. Only automation enables this level of precision and consistency.

Second, data capture. While in a manual laboratory, the scientists will take notes, often handwritten in their lab notebooks. Many details critical for full insight, understanding, and the ability to replicate an experiment truthfully, will be lost. In contrast, an automated system captures this so-called metadata throughout the whole experiment. For example, precise timings, temperature, humidity, CO2 concentration, etc., leading to a complete audit trail for each and every experiment.

Third, data stewardship. Often data in labs is stored and carried on USB sticks, with different naming conventions even within one research group, accessibility issues, storage concerns, etc. Given how critical it is to have complete records, and to be able to share them easily — with group leaders, project leaders, regulators, etc — we make sure that all data is captured and made accessible via a secure online portal, where every client and partner organization can safely access, view, download and share their consistently structured and annotated data.

Which barriers have you encountered while trying to encourage this shift towards automation?

Five years ago, when we founded Arctoris, automating entire discovery functions was considered impossible, and often unnecessary, by many. However, we have witnessed a radical change in perception during these past years, with many industry leaders recognizing how important data quality is for R&D success. This shift has definitely helped us grow from a small lab in Oxford to an established company that works with leading biotech and pharma companies worldwide.

One of the main drivers for this mindset change has been the growing role that artificial intelligence and machine learning are playing in our industry. Every day, we see more and more companies and researchers trying to harness AI for different tasks in drug discovery—target validation, information synthesis, de novo drug design, etc. When you ask the practitioners in the AI drug discovery space, they concur that the most important bottleneck right now is the lack of access to high-quality, well-structured datasets.

How does robotics contribute to machine learning applications?

All research relies on high-quality data to make the right decisions at the right time. Yet data quality, data structure, and data generation speed are even more critical for machine learning applications. Thanks to extensive sensor arrays and robotic execution benefits, automated laboratories can capture more than 100 times more data per assay than the industry standard. This combination of deep and rich data and metadata is what makes robotics-powered drug discovery so powerful, and enables us to generate the large, structured, well-annotated data sets that are used to train machine learning models.

How does automation affect reproducibility?

This goes hand in hand with enhanced reproducibility, built on full transparency into experimental execution, complete audit trails, and consistent application of automated protocols. This topic has become central to both funding agencies and the biotech industry as a whole. Reproducible data is key for successfully bringing a drug to the next stage and ultimately to the market. Pharma partners, investors, and regulators will look at your data, and you don’t stand a chance to get your drug approved if there are doubts about the data —  and rightly so.

The equipment needed for automation is expensive. Wouldn’t this leave out small biotech or academic labs?

This is precisely the reason why we created Arctoris. At present, lab automation—albeit relatively limited in what it can achieve—can, for the most part, only be afforded by large pharmaceutical corporations. But what about the small and medium-sized biotechs and academic groups where 95% of all the drug discovery research happens? This is the reason why we built Arctoris as a research platform, offering researchers worldwide remote access to advanced research capabilities.

Instead of building and maintaining their own automated laboratories, they can use our state-of-the-art equipment remotely 24/7. It is the same principle that also powers Amazon Web Services, where instead of buying and maintaining servers and having server rooms, companies can rely on cloud infrastructure. In this very same way, we make it possible for scientists to move from a laboratory-bound setting towards a setting where they can work from the comfort of their homes and use our research platform to run their research programs remotely.

Should researchers be concerned about their jobs?

The experience and creativity of human researchers are and will remain central to science and research. Drug hunters who have seen drugs getting approved and led discovery projects to success have extremely valuable insights — the same way that academic researchers come up with new hypotheses about life and disease.

What we want to do is to augment scientists so they are no longer slowed down by the speed with which they can pipet with their own hands. Instead, scientists are liberated to develop new ideas and leave the experimental execution to machines. It comes back to what most automation and AI researchers see as the path forward; not having AI and automation replace humans, but having humans and machines working hand in hand, and by doing so being more powerful than any one of them in isolation. 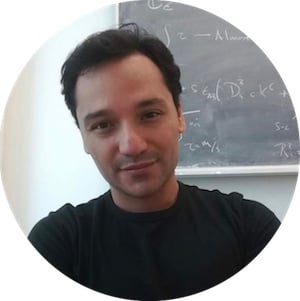 Alvaro Véliz Osorio was born in Mexico City to Guatemalan parents. After a PhD in Physics and Mathematics, he worked as a research fellow at the Mandelstam Institute, Queen Mary University of London, and Jagiellonian University. Alvaro now works as a science and technology communicator and a fundraising consultant, mostly centered on quantum technology and artificial intelligence.