Officially opened less than a year ago, The Francis Crick Institute is already conducting top-level biomedical research, has launched two spin-outs and struck research partnerships with both AstraZeneca and GlaxoSmithKline. I spoke to the Head of Translation, Dr. Véronique Birault, to learn more about the Crick’s unique model of translation and the key for its success.

With £700M (€800M) spent on its creation and an annual budget of £130M (€150M), The Francis Crick Institute is set up to be an epicenter of world-class research funded by the MRC, CRUK , Wellcome Trust and the three London universities Imperial College, King’s College and UCL. Some of the best UK scientists have already moved to the brand new building next to King’s Cross, or stayed for a few months to collaborate in one of the many research projects carried out by the 1,250 scientists employed there.

Such a massive investment is the UK’s effort to not only advance biomedical research, but also to generate wealth through spinouts that create jobs, and to impact health through collaborations with London university hospitals. To achieve this, the Crick has devised a fresh model to foster research that has an impact on the world. 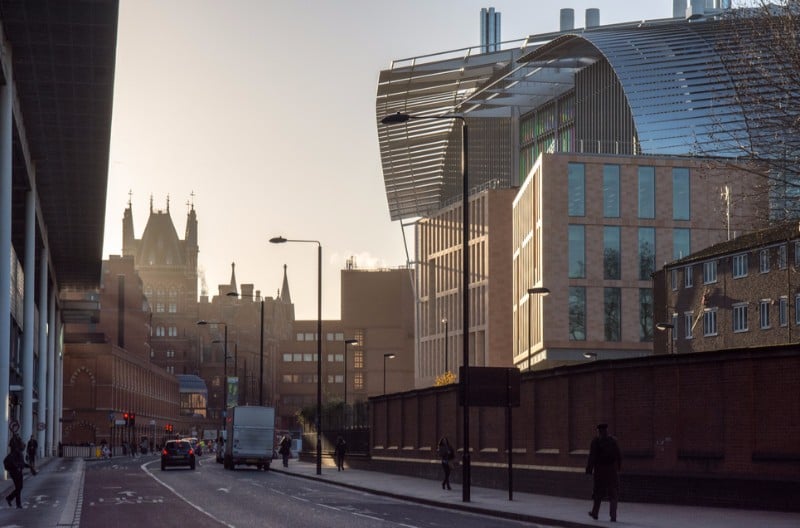 And the research center goes far and beyond to make its research truly interdisciplinary. “Fundamental science researchers work with applied scientists from academia and industry, as well as clinicians. A dedicated translation team including entrepreneurs and investors in residence support the scientists in their journey of early translation,” explains Dr. Birault. “It’s all about having the right people working with us, who can embrace our vision and are capable of guiding and taking forward our science, closer to the patient.”

Among the partners sharing the Crick’s vision are AstraZeneca and GSK, two of the leading pharmaceutical firms worldwide. GSK established a partnership back in 2015, before the Crick was even open, and there are now twelve projects in medical areas ranging from oncology to infectious disease, such as malaria and tuberculosis. AstraZeneca joined in May this year, right after opening its new facilities in Cambridge. “Our scientists are now just a short train ride away from The Francis Crick Institute at St Pancras in London,” said Mike Snowden, VP of the Early Development Biotech Unit at AstraZeneca.

What seems to have attracted such big players is the open science model run at the Institute. “We have scientists from GSK and AstraZeneca working with Crick scientists, doing fundamental science with us. And Crick postdocs and PhD students who go and work at GSK or AstraZeneca,” says Dr. Birault. The Institute and its partner then ensure the findings are shared with the scientific community through publications.

This close-distance translation model allows for a lot of flexibility and it’s delivering early signs of success with several projects. In fact, the Crick has already launched two spinouts, GammaDelta and Achilles Therapeutics. With biotech expert Paolo Paoletti as CEO, GammaDelta works on new immunotherapies based on gamma delta (γδ) T cells for cancer and autoinflammatory disease. Its technology has already attracted pharma giant Takeda to sign a $100M deal less than a year after its inception. For its part, Achilles Therapeutics has raised €15M in funding to work on neo-antigen therapies that emerged from the Cancer Research UK’s TRACERx study on lung cancer.

At the Crick, each project is evaluated individually to decide what direction it should be taken to. Sometimes, they can go straight to clinical trials. Others, the science can be further advanced through bigger grant from research councils or charities, through an industry partner or through a spinout.

In order to accelerate technology transfer, the deals focus on long-term outcomes, removing upfront payments and early milestones, and therefore the pressure to have results within closed timeline. “We focus on impact, and on our discoveries being taken one step closer to the patients, not short-term value creation,” explains Dr. Birault. “If the translation is a success, then there will be some reward coming back for the Crick but much later on, such as with royalties, for example.”

In line with this model of long-term impact over short term rewards, the Institute makes an effort to train the scientific leaders of the future. “We recruit junior group leaders to give them six years to establish groundbreaking science in a multidisciplinary environment. They can be renewed for another six years and then they have to go to other universities in the UK, or across the world.”

With its unique view, The Francis Crick Institute is setting an example and leading a shift in scientific translation.  “I think closing the gap between commercialization and research is essential. The critical challenge is to get the right skills at the right time, and the right team.” For Véronique Birault, the key to do so is through creative collaborations. “We’re seeing the early signs of success on the translation ecosystem – watch the space!”