Last week I had the opportunity to attend the World ADOPT Summit and hear from some of the world leaders in cell therapy. There I met David Sourdive, co-founder and EVP Technical Operations at Cellectis, a French company that is leading the development of the first off-the-shelf CAR-T therapy.

CAR-T therapy consists in the infusion of T-cells engineered to better identify and kill cancer cells. The most advanced approaches, which could be approved as soon as by the end of this year, use an autologous approach by engineering cells from the own patient. Cellectis is taking the technology a step further and developing an allogeneic CAR-T therapy that uses cells from healthy donors instead.

Cellectis uses TALEN gene editing to develop off-the-shelf products that could make this “miracle” cancer therapy faster, cheaper and accessible to a wider patient population. Its first therapy, UCART19, now licensed to Servier and Pfizer, has shown striking results in two babies with leukemia. A second one, UCART123, recently received approval from the FDA to start clinical trials.

With his company positioned at the forefront of innovation in cell therapy, I decided to ask David Sourdive how he thinks new technologies will change the scene.

What’s the Future of Cell Therapy? 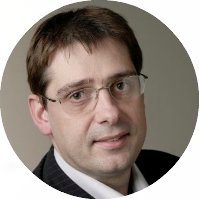 Cell therapy is now transitioning from the world of grafts, where it has been confined for decades, to the world of products. This happened with antibodies. People used to give their blood and antibodies. Then it became possible to manufacture antibodies from cells in an industrial setting, and then it became a product. I think that we’re going in that direction with cell therapy.

In the coming decade, off-the-shelf cell therapy will become a reality. That is a revolution and is going to change a lot of things. We will need to establish standards and regulations. Cells usually have not been regarded as products, so it’s a big leap. We have to discuss with regulators how to define the products.

The immune system is going to start being tweaked like it has never been and we will be able to take advantage of it to address very difficult diseases. For example, solid tumors. We think UCARTs can also target solid tumors. To that end, we work with two pharma partners that have strong capability to tackle these complicated tumors.

How do we get there?

We are the first ones to do [allogeneic CAR-Ts] and there’s no precedent. We have to invent everything. We have to figure out all the possibilities, all the solutions, and there’s no real way to predict how things are going to behave in patients because historically, the one kind of cell nobody has ever used is an allogeneic unmatched situation is T-cells, by definition.

It’s very exciting because every week we have to do something for the first time, it’s challenging. I think this year is the year when we will know better how allogeneic products behave in patients.

We have shown that gene editing can really be transformative in the CAR-T space. With gene editing, you can make the cells overcome the defense mechanisms of tumors. You can, for example, knock out genes such as PD1 so that CAR T-cells become capable of killing PDL1-bearing tumors.

Tumors that succeed in the body are tumors that have found a way to evade the immune system. You need to put additional features to empower the T-cells to do what normal T-cells fail to do. People will realize the transformative power of gene editing. We think it will take over the industry.

I think globally, gene editing is going to be a strong power because we are going to be able to tweak cells like we’ve never done before. We will be able to program cells to deliver a treatment locally. This is happening. It’s not futuristic. It’s now.

This is definitely going to be an exciting year, with the first CAR-T therapies approaching market approval and the first results from allogeneic CAR-Ts due soon. Keep tuned for the latest updates!