These instruments are alive. Yeast, moss and paramecia are behind the unique sounds of Living Instruments, which will be performing a concert in Zurich on October 21st.

Instead of strings or windpipes, the sounds of these instruments are generated by living beings. The sound of the ‘yeast organ’ is triggered by the bubbles produced by the fermentation of yeast inside five big flasks. Inside the ‘paramecia controller’, single-cell microorganisms swim in a small container; by playing with the electric field, the musician can influence their movement, which is then turned into sound. The ‘mossphone’ reacts to movements around it that change the electromagnetic field.

The instruments have a life of their own. “The musician that is interacting with the living organisms doesn’t have full control, so it’s improvised every time. It also requires the musician to adapt to the behavior of the living instrument. You have to be ready to give away some of the control,” says Luc Henry, who created the Living Instruments project back in 2016.

It all started when his childhood friend Serge Vuille, a musician and composer, visited the community laboratory of Hackuarium, a DIY bio association founded by Henry. Serge saw a connection between the creativity seen at the lab and the music he does as a contemporary musician. Together they started brainstorming ideas for the first Living Instruments prototypes, bringing on board Vanessa Lorenzo, an interactive designer, Oliver Keller, a physicist, and Robert Torche, a sound designer.

“We generate a kind of music that is relatively repetitive, but the fact that it’s living, that it’s unpredictable, makes it groovy,” says Henry. “For example, the bubbles that we generate with the yeast produce a repetitive pattern, but not exactly, giving a jazzy feeling to the music.”

Each performance is unique, with a big influence from the environment of the venue the artists perform in. For example, the temperature can make a big difference. “If we play in winter, in a place where there is no heating, the yeast is very slow. In a venue that is full of people, with a temperature of 25° to 30°, then the yeast will be much more active,” explains Henry.

“Same with the mossphone. If we work on a stage that is isolated from the ground, the signal is much lower. Once we played in a wooden stage and the instrument wouldn’t work at all. We had to take an electric cable to anchor the foot of the musician to the ground. The number of people in the room also makes a difference.”

Music informed by biology is not a new concept. Other artists have used the patterns of microorganisms to create musical pieces, based on their growth or their DNA sequences. But often the result is a static piece rather than a live performance.

“We really wanted to go one step further and take an even bigger challenge try to work with actual living things on stage, which is also more interesting,” says Henry.

The artists have been playing 2-3 times a year since the project started in 2016, performing in front of very different audiences. “Lay people often find the sound weird, because they are not used to these very complex soundscapes,” says Henry. “Music specialists like it because it’s very daring, it’s something that you don’t really often see, even in contemporary music.” 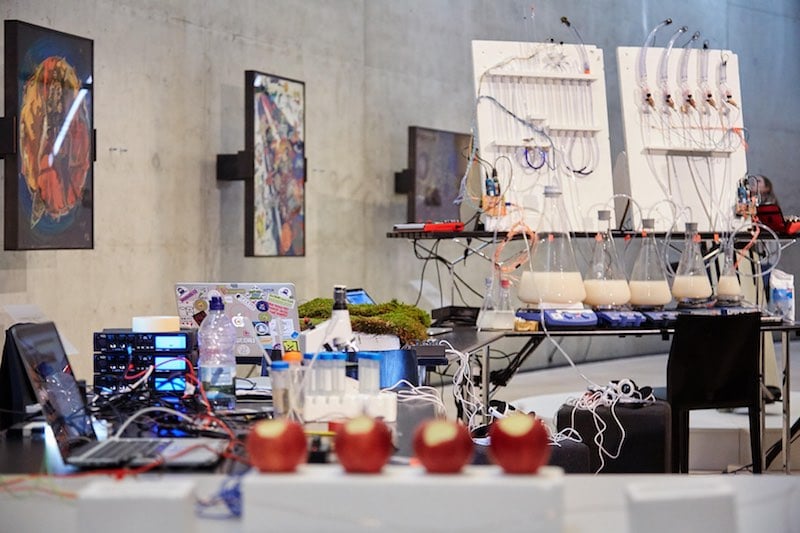 Over the years, the artists have been perfecting the instruments, sometimes with the help of their audience. “Some of the features of the instruments we use today were actually developed with help from people who participated in our workshops. They were either professional musicians or designers and came up with elements of software or electronics that we then included in the performance. Now we have something that is richer than what we had at the beginning.”

At the concert in Zurich next week, the performance will be preceded by a workshop where visitors will have a chance to learn about the science behind them. The idea, says Henry, is to get them engaged. “We will put the instruments in the middle of the room and let people move around and even interact with the instruments themselves. We want people to come and look closer, we don’t want them to look from a distance.”