Micropia, a museum of microbes located in the heart of Amsterdam, uses art to address the big knowledge gap between science and the general public.

Microbiology originated just a few kilometers from Amsterdam when Antoni van Leeuwenhoek built one of the first microscopes and discovered that everyday objects, as well as himself, were teeming with minuscule forms of life.

More than 200 years after Leeuwenhoek observed microorganisms for the first time, Micropia was opened in 2014 with the aim of erasing the negative view most people have on microbes. To do so, it features art installations that reveal the most amazing facts about these tiny creatures, still unknown and feared by many. 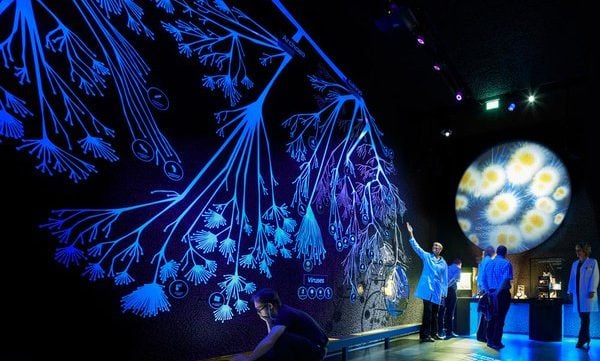 Professor Remco Kort from the Vrije Universiteit Amsterdam works in collaboration with the museum and is behind exhibits like the kiss-o-meter, which shows visitors how many bacteria are exchanged during a kiss and the many benefits it can have.

This piece is part of an exhibition titled ‘Rise and shine with microbes‘, which explores the role of microorganisms in our everyday lives. Did you know that microbes living in you and on you weigh 1.5kg? That they protect your skin and teeth? That they’re necessary to make most of the ingredients in your breakfast?

With living pieces and plenty of interactive installations, these are the kind of questions that the museum answers to curious visitors of all ages.

Micropia also highlights the big role microbiology can play in solving global problems, being used to purify water, develop new medicines, and produce energy or food. Its most recently added display focuses particularly on bio-plastics and how bacteria could turn the production of this ever-present material into a sustainable process.

What impressed me was that despite the overwhelming numbers of microorganisms that exist, this artistic space has somehow managed to include info and fun facts about all types of microbes, from bacteria and algae to the popular tardigrades or water bears — cute superhero organisms that can even survive in space. It’s just great to see science and art come together like this to make these exciting topics accessible to everyone.

All media from Micropia