As a central part of a myriad of pathologies, such as cancer, autoimmune and neurodegenerative disorders, virology, and metabolic diseases, the immune system is often targeted to develop novel treatments. Although the human immune system and its responses are highly complex, using it to fight diseases has yielded positive results so far.

Especially in oncology, immune therapies are looking promising. Unlike conventional cancer treatments, which can be seen as a combination of surgery, radiotherapy, and chemotherapy, immunotherapy uses a patient’s own immune system to detect and fight cancer cells.

“Initially, innate immune pathways were merely thought to contribute to the detection of viral or bacterial infections,” says Eric Vivier, Professor of Immunology at Aix-Marseille University, Practitioner at Marseille Public University Hospital, and CSO at Innate-Pharma. “Today we know that they also participate in the detection of tumor cells.”

A variety of cells within the innate immune system are responsible for detecting, targeting, and killing cancerous, infected, or damaged cells. These important players include natural killer (NK) cells, dendritic cells, macrophages, granulocytes, and mastocytes.

These cells are the key players of the innate immune system 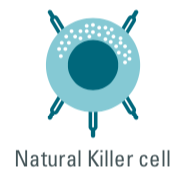 As a type of lymphocyte originating from the bone marrow, NK cells are known for their ability to target and lyse tumor cells and other infected or damaged cells. When NK cells detect cancerous or damaged cells, they express the inflammatory cytokines TNF-α and IFN-γ to alert the adaptive immune system. 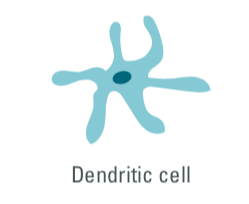 Like NK cells, dendritic cells come from the bone marrow and can secrete different proinflammatory cytokines and interferons. They are found in lymphoid tissues, epithelia, and blood. Dendritic cells support the development of the adaptive immune response by presenting antigens to B and T lymphocytes and other immune cells.

Cells that perform the maintenance work in the innate immune system are macrophages. Within their microenvironment, they remove pathogens, are responsible for tissue modeling, recycling, and degradation of dead cells. Similar to NK cells and dendritic cells, classically activated macrophages (CAM) or M1 can express pro-inflammatory cytokines. CAM also promote T cell expansion. On the other hand, alternatively activated macrophages (AAM) or M2 are responsible for anti-parasite and anti-fungal responses.

One of the most prevalent groups within the innate immune system’s leukocytes are granulocytes. Known as a number of subsets ‒ neutrophils, basophils, eosinophils  ‒ granulocytes have various responsibilities, including cytotoxicity, allergy and inflammation mediation, pathogen removal, and immunomodulation. All three subsets are also capable of antigen presentation.

Another cell type responsible for allergic reactions are mastocytes or mast cells, which also play a role in anaphylaxis. Upon stimulation, mast cells can release copious amounts of histamine and heparin in a short amount of time. Because of their instability, misregulation in mast cells can result in allergy-related or inflammatory disorders, autoimmune diseases, and cancer.

In recent years, research has given rise to a number of strategies that can be used to harness the strength of the innate immune system and its cells to fight cancer and other diseases. While some strategies include targeting entire signaling pathways, others address single proteins. Examples include STING, TLRs, major histocompatibility complexes (MHCs), inflammasomes, and the complement system.

“Tumors and pathogens can activate receptors such as endosomal Toll-like receptors (TLRs) and cytosolic nucleic acid sensors, like STimulator of INterferon Genes (STING) or RIG-I-like receptors (RLRs),” Vivier explains. “The synthetic targeting of such receptors has yielded promising results by reducing the tumor size in preclinical models.” 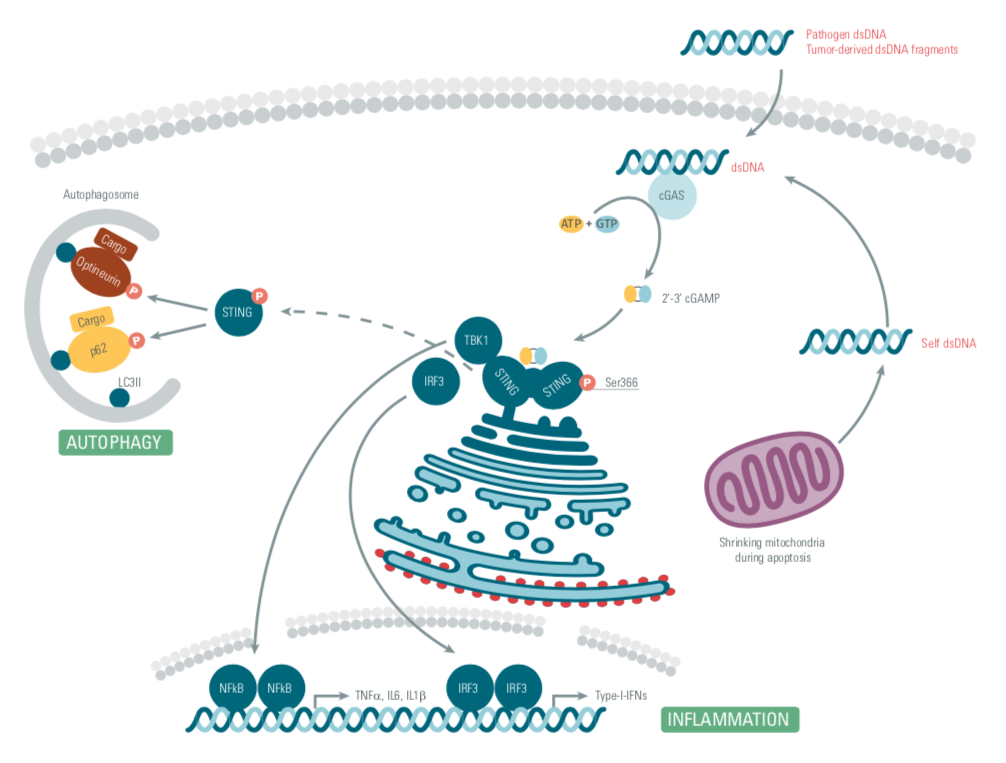 First discovered in 2008, STING is a homodimeric protein found in the endoplasmic reticulum. When activated, STING triggers a signaling cascade that results in the production of the cytokines interferon (IFN) -α and -β. IFN-α and IFN-β are responsible for the maturation of dendritic cells and the cross-priming of tumor-specific cytotoxic T cells.

In preclinical models, the activation of the STING pathway has shown promising antitumor results. It has also been found that tumor-derived DNA fragments can stimulate the STING pathway and trigger anti-tumor responses.

A number of pharmaceutical and biotech companies, including Novartis, Merck, and GlaxoSmithKline, are currently working on the development of STING agonists. In combination with other therapies, small molecule drugs, like these STING agonists, are thought to become promising cancer therapies.

Expressed by a variety of innate and adaptive immune cells ‒ macrophages, NK cells, mast cells, dendritic cells, monocytes, T cells,  and B cells ‒ Toll-like receptors are also found on the membrane of other cell types, such as fibroblasts, and epithelial and endothelial cells.

In humans, depending on the antigens they can bind and signal transduction within cells, TLRs are divided into 10 subtypes. While TLRs 1,2,4,5,6, as well as 10, are found on the cell surface, TLRs 3,7,8, and 9 are expressed on intracellular vesicles.

As part of the innate immune system, TLRs participate in the first line of defense when foreign pathogens invade the body. Stimulation of TLRs triggers innate and adaptive immune responses. In cancer therapy, this characteristic is used to develop TLR agonists that can infiltrate the tumor microenvironment and activate different immune cells. TLR agonists can also support the release of cytokines which facilitate the infiltration of lymphocytes and suppress cancerous signaling pathways.

Found in the membrane of most cells, MHCs are responsible for discerning foreign and inherent antigens. Depending on the cells they are found in, MHCs are classified into two types. Both have antigen-presenting characteristics, which makes them a central part of the development of humoral and cell-mediated immunity.

Type I MHCs are expressed by all cells except erythrocytes and a few other tissues. By interacting with TCRs and CD8 on cytotoxic T cells, MHC I are responsible for upholding the homogeneous state of cells. Cancerous cells or those that are damaged or infected often overexpress MHC I, which allows them to be recognized and removed by cytotoxic T cells

Whereas MHC I are expressed by the majority of cells, MHC II are mainly expressed by dendritic cells, macrophages, monocytes, and mast cells ‒ antigen-presenting cells, in short. MHC II are responsible for presenting exogenous antigens to T helper cells (CD4+ T cells). 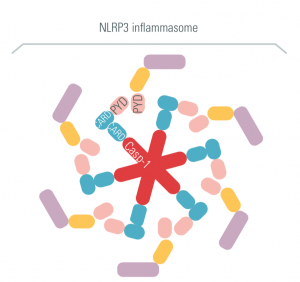 Activated through pattern recognition receptors (PRRs), inflammasomes are cytosolic multiprotein complexes that can trigger the production of a number of cytokines. Inflammasomes are activated in two steps: first, a priming signal triggers the accumulation of inflammasomes and then a second signal activates the assembly. The activation of the inflammasome assembly promotes inflammation within and around the cell.

In oncology research, inflammasome-mediated inflammation has been found to promote cancer development and progression. For instance, the overexpression of NLRP3, the most studied inflammasome, has been associated with several cancer types. NLRP3 has also been demonstrated to play a role in inflammation-induced tumor growth and metastases development. In cancer therapy, small molecules or synthetic compounds could be used to inhibit inflammasome activity, but these studies are currently at an early stage. 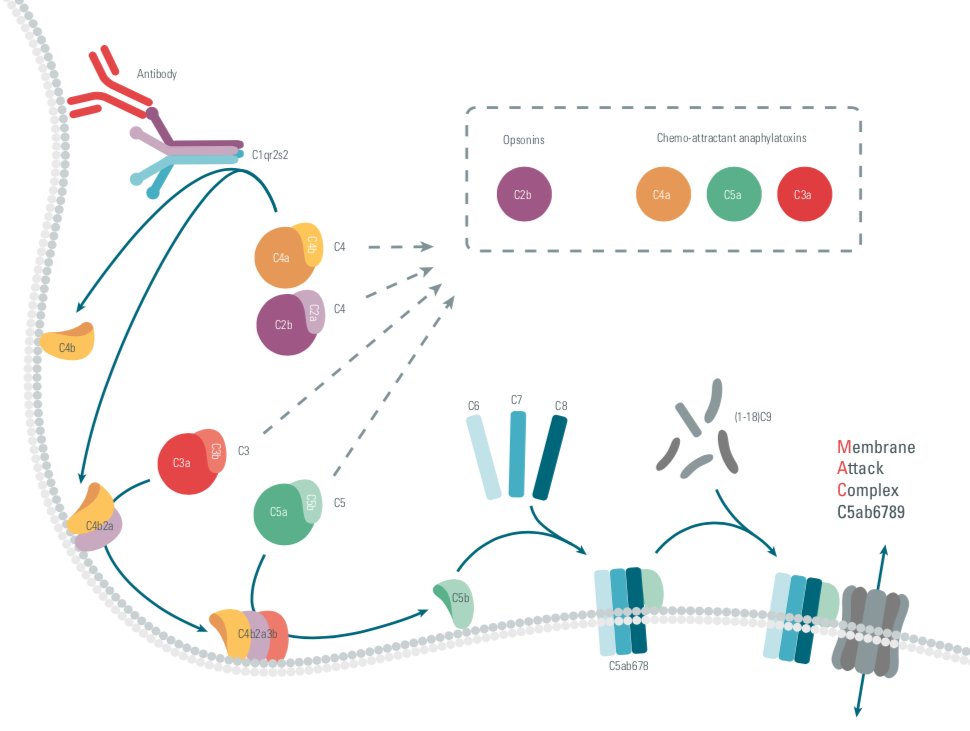 Consisting of 35-40 small proteins, found in the blood plasma, other bodily fluids, and on cell surfaces, the complement system has three main immune functions: promoting phagocytosis, immediate lysis of gram-negative bacteria and viruses, and triggering and sustaining inflammatory responses.

The complement system can be activated through three pathways. The classical activation pathway relies on a cross-talk between the adaptive and innate immune systems, in which a target is marked via antibodies triggering a cascade that results in cell death. This pathway is also the one being targeted for possible cancer therapy.

Immunology still has a long way to go

Currently, many immunotherapies are not tested as single treatments but rather in combination with other, already available therapies. This is done to improve the efficacy of cancer treatments and to overcome resistance.

“Many mechanisms of resistance to immunotherapy have been described,” says Vivier. “Numerous immunosuppressive factors have been shown to inhibit not only T cell functions but also innate immune cells. For example, elevated adenosine within the hypoxic tumor microenvironment is associated with a poor prognosis in multiple cancer types. The adenosinergic pathway has a dual effect because it both enhances the activity of immunosuppressive cells and inhibits the activation of T cells and NK cells at the tumor site. By targeting the adenosinergic pathway one could prevent immune inhibition and harness the immune system’s anti-tumor activity.”

“Despite the impressive numbers and the diversity of therapeutic strategies currently explored to reinforce anti-tumor immune responses; the possibility to combine immunotherapeutics with conventional approaches; the multiplicity of cancer types that can be combined with a patient’s medical history and intrinsic or extrinsic factors, it becomes essential to master the processing of all this biological and clinical data,” says Vivier. “These large amounts of data will necessitate bioinformatic capabilities and developments in artificial intelligence in order to achieve the ultimate goal: providing the right treatment for the right patient at the right time.”

Do you want to learn more about immunology, the innate or the adaptive immune systems? Check out Cisbio’s brand new immunology booklet, which provides key insights into how the immune system can be used to develop impactful treatments for patients suffering from various diseases, such as cancer and inflammatory disorders.

Images via Cisbio from “Immunology: Insight into the Diversity of Cells & Signaling Pathways” and Shutterstock.com