Located in the charming town of Utrecht in the Netherlands, Ntrans Technologies was newly founded in 2015 based on a cutting-edge intracellular delivery technology developed at the Hubrecht Institute of the Royal Netherlands Academy of Sciences. 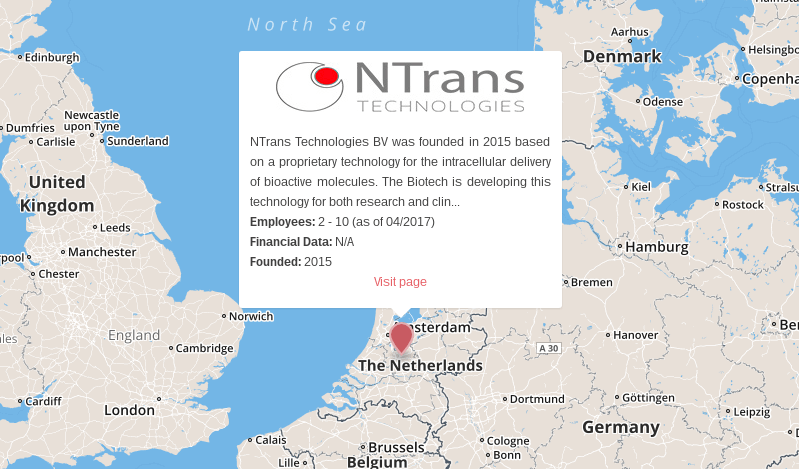 Mission: NTrans is developing the iTOP technology for its use in research and as a therapeutical platform for the delivery of bioactive molecules into cells. The iTOP (induced Transduction by Osmocytosis and Propanebetaine) delivery technology is based on the research of Niels Geijsen and his group and consists of a combination of small molecules that drive the uptake and intracellular release of extracellularly applied macromolecules. This method allows for an efficient delivery of recombinant cytoplasmic and nuclear proteins into a wide variety of primary cell types – including stem cells.

Comment: Ntrans’ technology could solve one of the major issues in gene editing, namely the efficient delivery of the gene editing proteins into primary cells such as donor-derived T cells or stem cells. The iTOP technology allows bringing proteins such as CRISPR/Cas9 directly into a wide range of cell types to directly operate on their genome. The method also leads to a transient cell manipulation since the protein-coding genes are not integrated into the genome, thus also lowering the risk of off-target effects.