You must have heard of GPCRs, or more specifically G protein-coupled receptors. Doesn’t ring a bell? You know, it’s this large protein family of receptors that sense molecules outside the cell and trigger an inside signal. A technology called IP-One could give a large advantage to scientists working on GPCR-targeted drugs. We had the opportunity to attend a webinar dedicated to the GPCR drug discovery research in which scientists from academia and biotech companies exchanged ideas around this promising field.

As you may remember, there are several GPCR classes, coupled to different G proteins, which activation is triggered by ligand binding. In the case of Gq coupled receptors, this leads to the activation of Phospholipase C. The phospholipase cleaves PIP2 into IP3 then IP2 and finally IP1. In our case, it’s the latter that’s interesting. 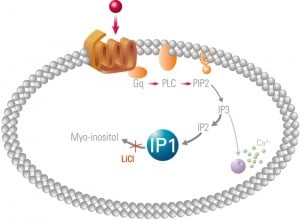 Based on this pathway, Cisbio Bioassays has developed IP-One, a bioassay kit that specifically measures IP1 levels in cells. By using LiCl in the process, this technology avoids the degradation of IP1, which ultimately accumulates in the cell. IP-One allows scientists to accurately quantify the accumulation of IP1 in cells.

IP-One is a patented competitive immunoassay involving a specific antibody with terbium cryptate (donor) and IP1 coupled to d2 (acceptor). In a standard state, the interaction between the donor and the acceptor produces a fluorescent signal. When unlabeled IP1 is present in the sample (due to GPCR’s activation), it will competitively bind to the antibody and take the place of the labeled IP1. The fluorescence will then decrease, as the donor is not in close proximity to the acceptor anymore. The range of the decrease is directly related to the IP1 accumulation.

Simple enough! IP-One comes at a time where the market is in need of a robust assay to screen Gq coupled GPCR.

And guess what? The protocol is very easy to set up, as Nicolas Pierre, Global Product Manager at Cisbio explains: “Simply stimulate the cells with your ligand or your compound using the kit’s buffer. Lithium Chloride is already in the buffer. Following stimulation, add the detection reagents, incubate and read. It’s that simple”.

According to several studies, around 30% of the best-selling drugs on the market are based on GPCR targets. To develop these drugs, you need to find out how your drug candidate interacts with the GPCR. Two main approaches can be chosen.

You can first use the market leading technology called calcium flux, which measures calcium release in the cell. As GPCR activation triggers a calcium release, the calcium being released is directly related to GPCR activation… but hey, calcium is also released in many different ways. In fact, there are so many other calcium stimulation possibilities, chances are you will measure false positives at the same time!

IP-One is becoming a real “must-have” for labs working on GPCRs. In 2014, an average of one peer reviewed article every 2 weeks described the use of IP-One in its materials and methods!

Also, we discovered a while back that GPCRs are more complex than initially thought. For a long time, GPCR ligands were described as pathway activators or inhibitors. That was without counting on a third type of binding molecule, namely biased ligands. These special molecules can simultaneously activate one pathway and still inhibit another. Drug makers had thus found a good opportunity to develop new drugs without side effects.

Trevena, a company discovering new drugs based on biased ligands, is the perfect illustration of this last statement. One of Treneva’s scientists, William Gowen-McDonald, who spoke last month during the webinar on GPCRs, commented that functional assays, like IP-One, are powerful tools in rational design of biased ligands. And here’s the proof. Trevena already counts two drug candidates in phase II clinical trials!

Nicolas Pierre, who also participated to the webinar, also commented: “On the topic of Biased signaling we felt having Conrad Cowan from Trevena and Terry Kenakin, from UNC School of Medicine, would yield a solid discussion on where the filed was going. It was fantastic to hear Terry evoke some of the advantages IP-One boasts over Calcium Flux assays”.

GPCR-targeted drugs are still a huge field to explore and laboratories can definitely benefit from IP-One technology. IP-One can greatly facilitate your day-to-day science. So don’t hesitate to try it out or to look for more information.

Here is the link to the Webinar I previously mentioned, and you can also find out more about IP-One kit on this link. 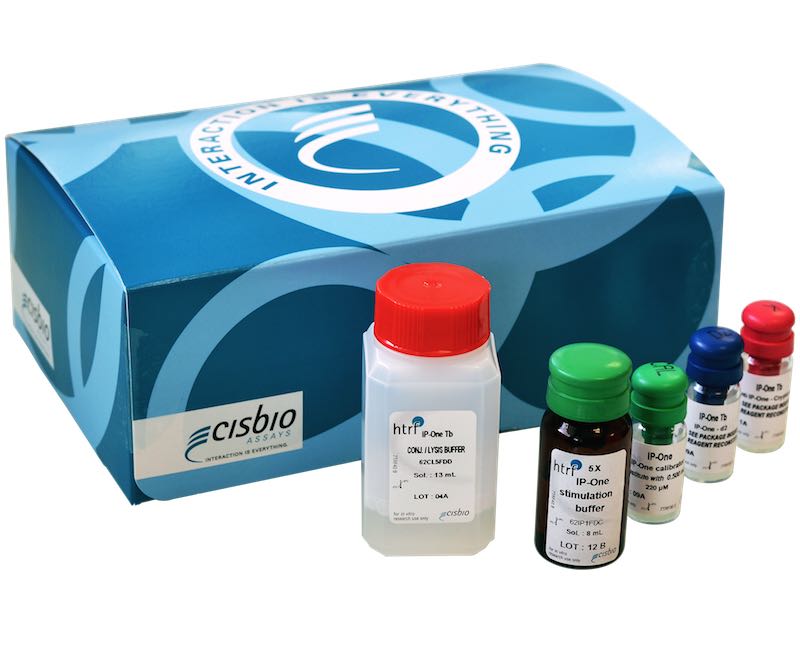 Editor note: this post is sponsored by Cisbio Bioassays, manufacturer and distributor of IP-One