Career options for chemists are shrinking in the shift towards biological drugs. But as antibody-drug conjugates (ADCs) take off, so do opportunities for chemists!

Since I quit graduate school in chemistry research and dove into biotech journalism, I wasn’t sure when I would next enter a discussion about organic synthesis. This week, less than a year after my departure, I found myself back amongst my old kind at the World ADC Conference in Berlin. I came close to shedding tears of nostalgic joy listening to talks that revolved around synthetic strategies towards linkers and new toxins to kill cancer cells.

Migration between scientific fields echoes any expat experience. When I leave my new home in Berlin to visit where I grew up in Los Angeles, I relax into certain idioms and prepare to debate optimal freeway routes; going ‘home’ to organic chemistry means brushing up on named reactions and analysing thermodynamic incentives. Despite ADCs’ position squarely within biotech, the culture of the conference’s first day was so strikingly similar to that of synthetic organic chemistry that attending biologists had to introduce themselves as such when they asked questions.

Though one third of an ADC is an antibody, the discovery stream was almost entirely focused on the medicinal chemistry of toxins and linkers. While biologists may be taken aback, it seems that ADCs have become the domain of organic chemists. 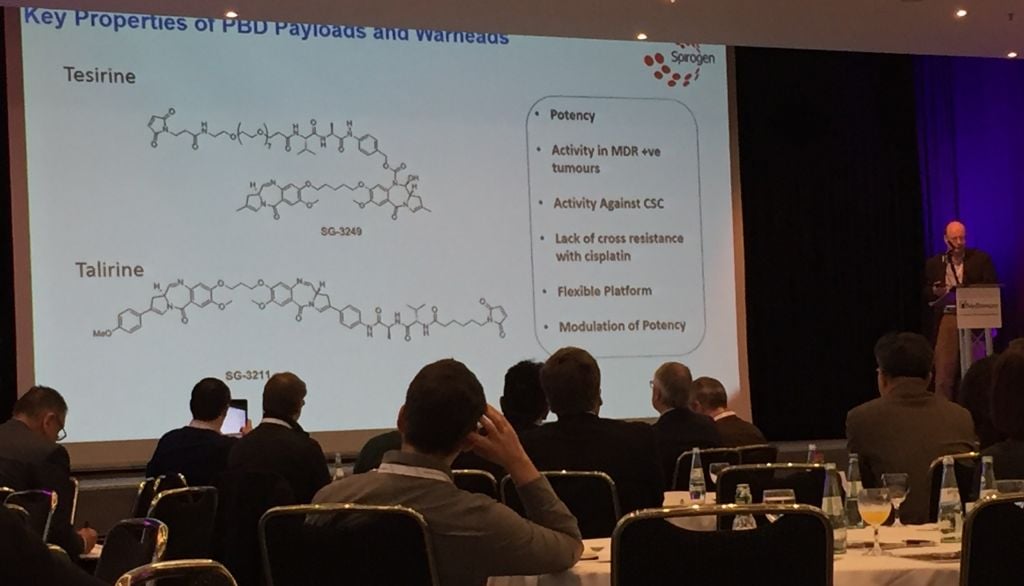 The stream kicked off with a talk from Phil Howard, the CSO of Spirogen, which was founded in 2000 as an anticancer agent company — that is, one with a hardcore medicinal chemistry focus. Though it has since been acquired by AstraZeneca for €416M, Spirogen retains its place at the forefront of the field while its founder, Chris Martin, has moved on to found ADC Therapeutics.

Spirogen, in collaboration with Seattle Genetics, is now developing pyrrolobenzodiazepine (PBD) dimer toxins that can be linked in a variety of ways. A particularly instructive study focused on purely carbon chains. Dimers joined with five carbons give the molecule just the right amount of flexibility to wrap themselves into the minor groove of DNA. The optimally snug fit makes Tesirine the most effective cross-linking agent that is thereby able to damage DNA and induce cell death. (Medicinal chemists will also see this as an opportunity to tune the potency!)

So far, ADC payloads have usually been anti-mitotic agents like auristatin and maytansine, but PBD’s are attractive to chemists as simpler (“less stereochemically complex”), more easily manufactured (via “scalable synthesis”) and more effective (potent) payloads. Additionally, Spirogen found Tesirine to be more tolerable in the near-certain event that some of the payload detach before the antibody reaches its target.

This consequence of linker instability was the critical failure of the first generation of ADC’s and resulted in the first-in-kind, Mylotarg, to be withdrawn from the market. NBE Therapeutics is attempting to solve this problem by substituting the traditional but relatively unstable maleimide-terminated linker with a chain of glycines, whose amide bonds are comparatively stable in serum.

Despite the heavy focus on chemistry in the field of ADCs, the development of these drugs would not be possible without biologists: when it comes time to submit an IND application, the dossier on the drug has to cover both the chemical and the biological elements. This point might sound obvious, but as Senior FDA Investigator Wen Jin Wu discussed in his talk to close the first day, some of the most frequent pitfalls of the application process stem from not paying enough attention to the antibody.

ADC’s represent an exciting new field that has seen renewed interest in the past few months, as funding has poured into NBE Therapeutics and ADC Therapeutics. These developments are great news for chemists that might be discouraged by the shift in pharma’s focus towards biological drugs: they may yet find a new home in ADC’s!