Last September 24th  was held the Baden-Württemberg Healthcare Industry Forum 2014, organized by BIOPRO the biotech cluster of this German region. It was an opportunity to review the bilan of the cluster and to learn interesting facts.

BIOPRO has listed 159 biotech companies in the Baden-Württemberg area, representing a workforce of more than 22,000 employees and a turnover of almost 4 billion euros. Like in a lot of clusters around the world, the majority of these companies (93%) are working in the red (medical) biotechnologies and 80% of them employ less than 50 people. Concerning the bigger companies with more than 250 people, they generate around 86% of the 4 billion revenues previously mentioned. The biotech sector is still a very young industry but Baden-Württemberg has other ressources to support its development: 635 companies developing medical devices and 131 pharmaceutical companies which make Baden-Württemberg the leading region of Germany in these two industries.

For Dr. Ralf Kindervater, CEO of BIOPRO, “The biotech sector is a priority of the region”. To complete this sentence Dr. Simone Schwanitz, General Director of the Baden-Württemberg Ministry of Science added “Health is important to drive the industry. In our region 1/9 jobs are in the health sector. We are investing a lot in University research to drive innovation to the industry. We have for example set up a Start-up funding for 5 years in the Institute of Medical Technology in Mannheim. We are also the first federal state of Germany which increase university fund by 3% per year, with a budget of 600 millions euros for research programs between 2015 and 2020”. 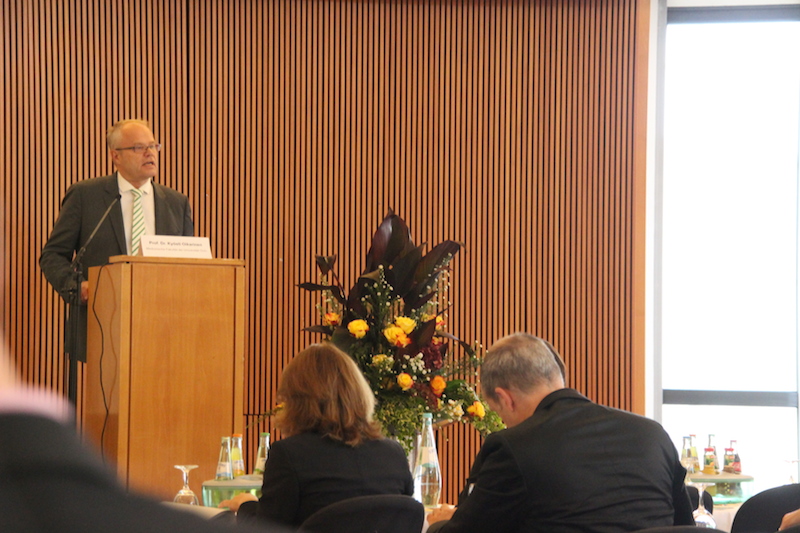 Dr. Roland Eils, from the University of Heidelberg and the German Cancer Research Center DKFZ has intervened as proof of this investment in University research. In the DKFZ, his team is leading the German part of theInternational Cancer Genome Consortium that aims to create the world largest collection of whole genome sequences of patient having cancers. With just one value you will understand the challenge. Everyday the social network Twitter is producing 12 Tbytes of data and it’s the biggest producer of data around the world. The team of Roland is producing between 5 and 10 Tbytes of data per day… but they don’t have Twitter’s ressources. That’s clearly Big Data! And to help in this mission, the DKFZ has improve its IT ressources from 10% to 20% of the DKFZ’s  total budget. Thanks to this and the work of scientists, Heidelberg is at the top to use and save data from whole genomes.

But has we said the cluster is also driven by the Pharmaceutical industry in the region. A good example is the recent 465 million euros deal that has been conclude between Boehringer Ingelheim and Curevac, a German Biotech, to develop a new treatment in lung cancer. Dr. Uwe Bücheler, Senior Vice President of the global pharma operation of Boehringer was here to attest it. He said that this deal shows how the local network of Baden-Württemberg is important and that the vaccin technology of Curevac will be combine with the molecular biology experience of Boehringer to put a new innovative product on the market. 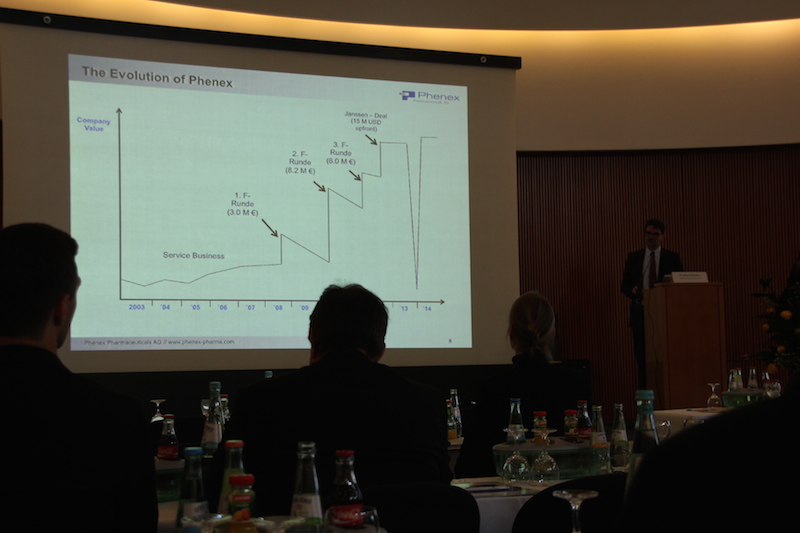 The biotech cluster could not be itself without biotech companies. Dr. Claus Kremoser, CEO of Phenex a Heidelberg-based biotech company was here to tell the story of his company, which will surely be a success story in the future. Phenex focus on nuclear receptors to develop drugs against inflammation. The company employs only 20 people but almost all PhD and has developed an intelligent outsourcing network to drive its drug candidate to the market without doing any physical work in-house. Phenex benefits also from the Baden-Württemberg region especially to recruit very qualified and experienced employees from universities and to increase its network. But in December of 2013 everything almost ended for Phenex. One of its program called FXR was in clinical stage in Vienna. The 4th patient of the study had showed heart problems side-effects due to the treatment and it seemed that everything needed to be cancelled. But in the same time a US-based company, Intercept, was developing the same agonist. In 2014 they were developing a Phase II and they went public with a 70 million stock exchange introduction. This showed to Phenex that they were not worried about the Vienna event because they knew that their product wasn’t producing side-effects. Fortunately, Phenex has also kept a back-up molecule in the pipeline and went to Phase IIa in beginning of 2014. Despite its previous bad results in Vienna, Phenex has been contacted by 14 US companies interested in partnerships because on contrary to the Intercept’s candidate, the new Phenex’s molecule was not increasing HDL/LDL ratio in patients. Now the two companies are competing to reach the market, one in US with a lot of ressources and one in Germany, with the disadvantage of lacking money but still at the top of science. 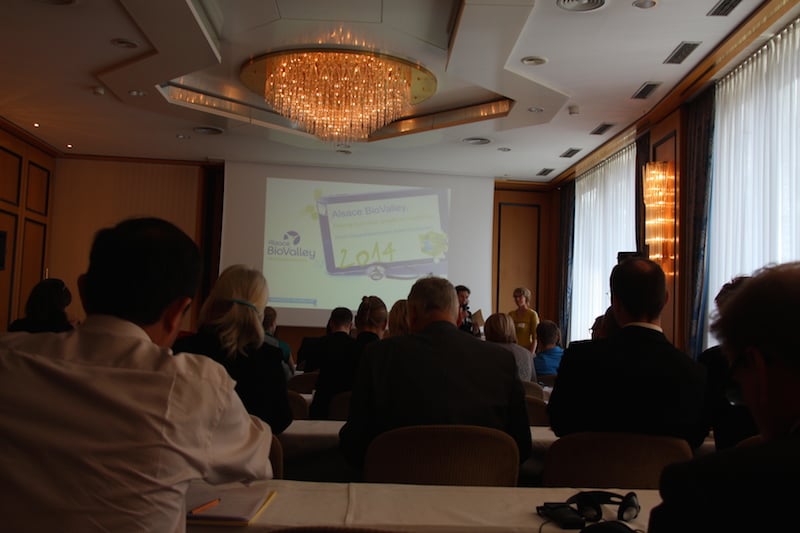 This event was also an opportunity for BIOPRO to let its partners present themselves. Oulu Health for example, is the cluster surrounding the city of Oulu in Finland and the largest medical campus in north of Europe. They explained to the audience that Finland biotechs are heavily supported by Tekes, a national 577 million euro annual fund that has already helped creating 680 startups whose 67% became SMEs. Another big strength of the Finnish biotech industry is that 25% of shares in innovating companies are detained by universities and research institutions which prove the strong technology transfer capacity of the country. A good example for other European countries!
Another country which help a lot startups is France and Alsace Biovalley, one of the top three life science cluster of the country, was here to testify. Alsace Biovalley is part of the larger cluster Biovalley which include a part in France, in Germany and in Switzerland. Together they gather 50 000 employees and 600 companies working in life sciences. A noteworthy fact was the creation of a French-German institute for Translational medicine in Strasbourg.The project was created with a budget of 100 million euros for 5 years to support therapy development projects between biotech SMEs and academia. The objective is clearly to de-risk this kind of project for companies and improve the technology transfer. The last partner was Life Science in Canada, a cluster that could offer access to US market with the world largest free trade zone but also the biggest R&D tax benefits just after France in world ranking.

Finally, this event was also the opportunity to make network connexions in this region and participate to diverse workshops from Big data to Diagnostic companies and more.