The exhibition in Amsterdam showcases the works of ten bioartists questioning the huge complexity of ethics in the rapidly developing field of biotechnology.

The Waag Society has brought together bioartists from all over Europe that explore topics like gene editing, antibiotics, human tissue culture, public health and personalized medicine. After a series of performances discussed in front of ethic committees, the artworks from “Trust me, I’m an Artist” are all now exhibited at Zone2Source in Amsterdam to incite the public to question whether current practices in biology research are ethical, and what roles and responsibilities should scientists, artists and institutions have when addressing ethical challenges.

Howard Boland explores the intersection between synthetic and biological matter by creating hybrid entities with emerging properties. Through computer modeling, he designed star-shaped silicone scaffolds that move when seeded with certain cells.

“Still today, with all advances of molecular biology, motion remains a key attribute used to characterize something as living,” Boland writes on the project’s website. His first take employed heart cells taken from newborn rats, which raised the ethical question of whether it’s ethical to sacrifice animals for art purposes as it is done for research.

Boland’s cellular propellers now employ his own sperm cells instead. “Genetically, the propeller is human,” he writes, which raises questions around legal restrictions to obtain human biological material and the ownership of the final product. 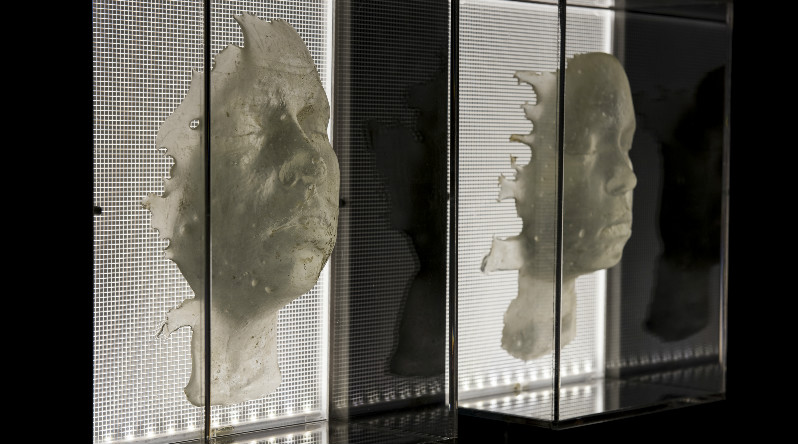 Gina Czarnecki has turned her own daughters into art. The girls’ skin cells are cultured on glass casts of their faces, where they grow to form thin skin masks with the shape of their own faces. The resulting pieces, which carry the girls’ DNA, raise questions about identity and highlight ethical concerns over the ownership of biological materials when the donors are minors.

As their mother, Czarnecki consented for the girls and gave away their ownership, as it’s done nowadays when donating samples for research. They cannot longer make any decisions regarding their own biological material. 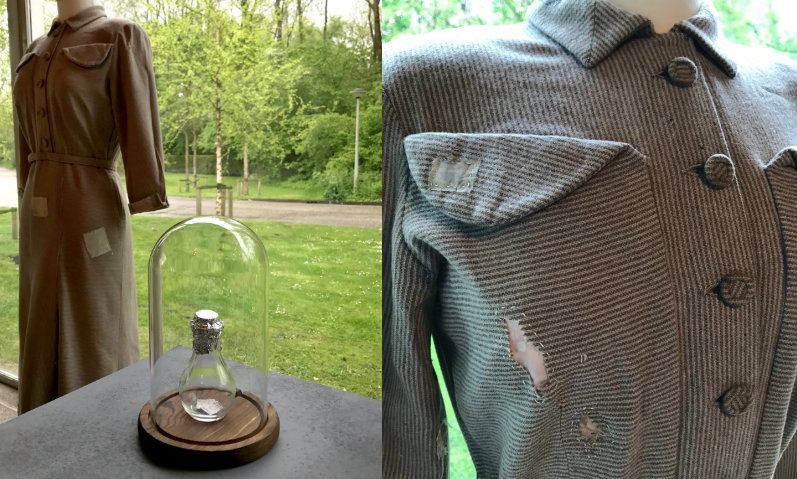 Anna Dumitriu explores the challenges of antibiotic resistance, which currently constitutes a worldwide crisis. Her piece is an altered antique wartime dress patched with cloth that contains genetically modified E. coli bacteria and commemorates the 75th anniversary of the first use of penicillin in a human patient in 1941.

The bacterial DNA has been edited with CRISPR to remove the gene that provides modern day bacteria with resistance to penicillin and other antibiotics. The deleted sequenced has been replaced with the WWII slogan “Make, Do and Mend” encrypted with ASCII code and then to the 4-base DNA code.

“We now face a serious global problem of antibiotic resistance as disease-causing bacteria evolve mechanisms to resist our attempts to destroy them, and the wonder drugs, such as penicillin, no longer work. This is in some part because we have misused these drugs since we kick-started the arms race of the antibiotic age in 1941. Our antibiotic stocks have not been protected as the controlled commodities they should have been.”

Art can be a great tool to explore complex issues and bring the public closer to concerns regarding ethics that some scientists face in everyday practice. The “Trust me, I’m an artist” exhibition, which also features pieces on our relationship with radioactivity, our views on disease and the indifference of most of us towards plant research, will run until June 25 for those curious to explore the ethics of biology.

Thanks to Anna Dumitriu for providing the images