Thomas Feuerstein is an Austrian BioArtist who sculptures with living organisms and Biotechnology lab equipment – which challenges the mentality of hardcore Green science. 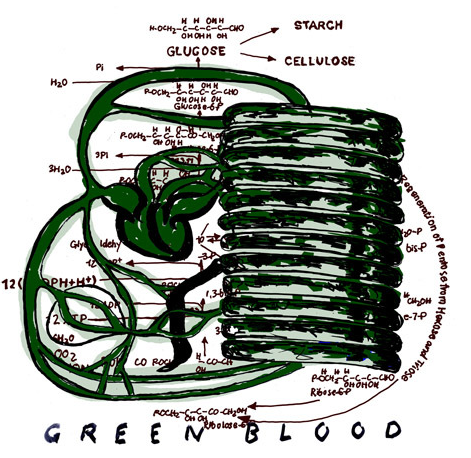 Based in Innsbruck, Thomas originally studied Art History and Philosophy. His works started dwelling on Biotech during the 90’s, from when he was part of the Bibliophy project, which ran from 1995 to 2002.

This aimed to discuss ideas surrounding genetic engineering, when he wrote an essay named ‘Better Dead Than Read‘:

The question ‘Better dead than read?’ (…) places us before the choice of dying a ‘natural’ death or reading ourselves and our environment, in other words decoding the book of nature and subsequently recoding it.”

Building on this, Thomas works with Biotechnology would become exhibitions that take natural phenomena, like digestion and formation of fossil fuels, to an artificial setting of laboratory equipment and vessels.

For example, Pancreas (2012) is a processual sculpture that transforms books into sugar, to feed human brain cells – i.e. Biotechnology to transform language and books into matter and flesh.

Books were shred into tiny bits of paper before soaking in water for a suspension in the tubule sculpture. Inside this matrix, the bacteria broke down the paper’s cellulose to glucose. After purification, the glucose was then fed to a culture of brain cells.

This artificial intestine is not so different from a lab-scale fermenter, including those that test the effect of nutraceuticals, for example, in the microbiome – a highly relevant research field in Medicine, but also a very popular medium for BioArt.

In the Futur II (Time Machine) (2013), Feuerstein explores another type of fuel. Chlorella vulgaris, is a type of algae (which are full of Biotech potential) grown in a especially designed glass photoreactor.

The algae culture was then submitted to hydrothermal carbonization, a chemical process that transform the biomass into coal – which naturally takes millions of years.

This was a slightly ironic destiny for algae, which instead ‘promises a Green future for Biotech‘ and the ‘3rd Industrial Revolution’. Feuerstein later used this algae coal to make drawing crayons for illustrations.

In the more recent Psychoprosa (2015), the lab was combined with a greenhouse… and a hallucinatory experience.

The mushroom Psilocybe cubensis was grown inside the Psilosphere to produce psilocyn – a hallucination-inducing drug.

By its side, algae were also cultivated in a greenhouse, from which the biomass was later incorporated into the ‘Gate‘ (also 2015). In the Gate, the amino acid tyrosine was extracted from the algae and chemically transformed into dopamine – a neurotransmitter dubbed as a ‘happiness chemical‘.

Both molecules (psilocyn and dopamine) were then mixed in glass sculptures to create the synthetic psilamin, a hallucinogen that has never occurred before in a natural context.

The remaining biomass of algae and fungi was heated, cooled and mixed, forming thick threads and veils in transparent, liquid sculptures – creating a visual effect close to the psychotropic effect of psilamin.

Thomas Feuerstein’s most recent exhibition, The World, features drawings with cyanobacteria, a slime installation, everyday objects chiselled from coal and a sculpture made out of sugar.

It will be exhibited in the Galerie Elisabeth & Klaus Thoman in Wien until the 23rd of April.

Feuerstein’s works are a fascinating reinterpretation of natural phenomena with Biotechnology. And it did leave me wishing I had ‘designer’ bioreactors as well.

A look into the lab-kitchen of the ‘Psychoprosa’ exhibition…
Please accept preferences cookies to watch this video.