The Dutch Design Week featured several biodesign projects that explore how the future will be shaped by the advance of biotechnology. Let’s have a look at some of them.

Celebrated annually in Eindhoven, the Dutch Design Week has become a hotspot where designers share the latest trends and technologies. In the last few years, biodesign is increasingly drawing the attention as synthetic biology techniques are revolutionizing the way we produce and work with materials, often as a sustainable alternative to traditional methods.

Adidas is already producing biodegradable silk sneakers made in bioreactors and Coca-Cola is working on renewable bioplastic bottles. So what were the latest innovations presented this year at the Dutch Design Week?

Synthetic biology techniques become more and more accessible. For example, thanks to Bento Bio, you can already buy your own kit to analyze DNA samples at home. But what will happen when anyone can edit DNA at home?

In a workshop titled Biodesign for Social Impact, a team of students from the University of Edinburgh presents the potential of biotechnology to take over the social and political landscapes in the near future. Their project UK 2029, which won the runner-up award at the BioDesign Challenge 2017, imagines a future where the United Kingdom allows the release of GMOs, leading anarchist biohackers to use genetically modified fungi to fight gentrification and to create skin implants to hide microbial factories from the government’s microbial surveillance technology. 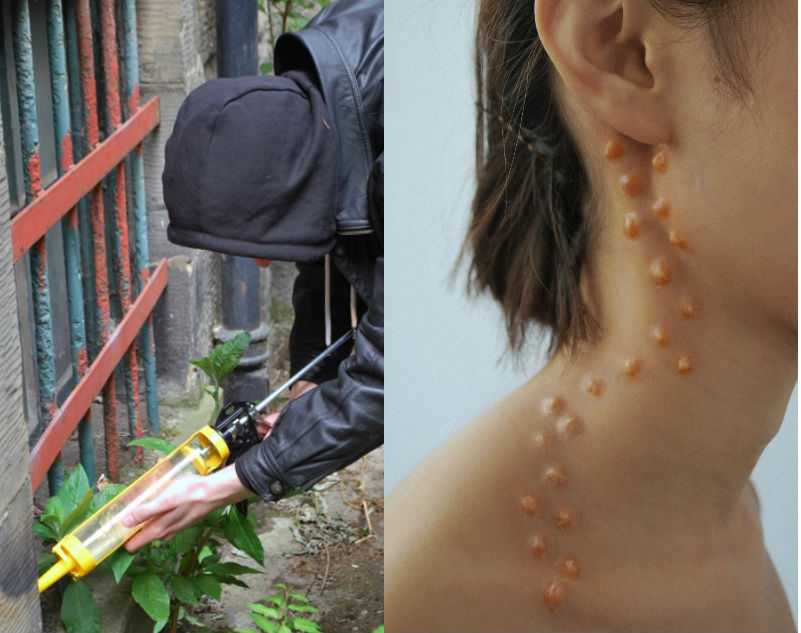 The Material Sense LAB in Eindhoven develops biomaterials adapted to the needs of the future. “We want to leave behind as little waste as possible,” says founder Simone de Waart. At the Dutch Design Week, one of the projects it presents is a new form of bio-based currency. The coins, made of bioplastic PLA, have already been successfully used as payment during the Gebouw-T festival.

Another project is Xyhlo bio-finish, a black paint made out of a type of fungus called Aureobasidium pullulans. This black fungus can tell how healthy the wood of the trees it lives on is, depending on how dark its color is. This allows assessing when the material is at the end of its lifecycle, which can then be re-used for other applications. Three buildings in the Netherlands have already been painted with Xyhlo bio-finish and the Material Sense LAB is following how it holds up.