UK biotech startup Bit Bio has received €36.9M in Series A funding to boost the manufacturing efficiency of human cells for use in cell therapy and drug discovery.

The impressive deal brings Bit Bio’s total funding to €44.4M since it was spun off from the University of Cambridge in 2016. It’s the second-largest Series A round raised by a European biotech startup so far this year, just after a €55M round raised by the Dutch neurology company Prilenia Therapeutics earlier this month.

Human cell lines are essential for the development of drugs and cell therapies. But specialized human cells such as neurons and muscle cells are difficult to source from tissue samples in bulk. One way around this problem is to source more easily obtainable types of human cells from tissue samples, reprogram them into stem cells, and then transform them into the desired cell type. However, existing methods tend to use viral vectors to engineer the stem cells, an approach that produces a low yield of the desired cell type.

Bit Bio’s approach is to screen large cell biology datasets for ‘cocktails’ of proteins called transcription factors that are needed to turn stem cells into the desired cell type. The company then genetically engineers the stem cells so that they switch on this cocktail when given the antibiotic doxycycline. This way, the stem cells can be transformed more precisely and efficiently than with viral vectors.

“If one considers the transcription factor combinations that determine a cellular identity as a ‘program,’ then [our technology] is the ‘enter button’ to the operating system of life that enables faithful execution of any genetic program,” said Kotter.

So far, the team has successfully reprogrammed human stem cells into a range of specialized cells such as neurons and muscle cells. If developed at a commercial scale, the technology could reduce the limits on human cell manufacture that is currently holding back the production of cell therapies and drug discovery tools.

Another Cambridge-based biotech company working to optimize the production of human cells is Mogrify, which turns cells from adult tissue samples into other mature cells, except without the step of turning them into stem cells first. This could make the process even cheaper and more scalable than technology using stem cell stages. 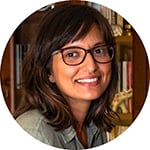 Manuela Callari is a freelance science and medical writer from Sydney, Australia. She has a Ph.D. in Medical Science, a Bachelor’s, and a Master’s degree in Material Science. She used to wear a lab coat, now she writes about science, technology, environmental science, health, and medicine.