An international group of researchers has set up a brain-machine interface between cultured nerve cells and electronic chips linked over the internet, which could lead to the development of AI implants for treating neurological disorders.

As described in a study published in Nature Scientific Reports, the team set up a system where cultured rat nerve cells in Italy could send real-time electrical signals to artificial neurons — circuits that behave like nerve cells — in Switzerland. The online signals were passed via electronic synapses — or ‘memristors’ — in the UK. The signals could also go the other way, sending communications from the artificial nerve cells to the biological nerve cells.

Technology linking the nervous system with machines, called neural interfacing, is an established field, including technology such as cochlear implants treating hearing loss. In the last few decades, however, scientists have made technological advances that let machines use artificial neural networks and integrate better with real brains. This could lead to implantable AI computing chips that treat complex neurological problems like Parkinson’s disease.

One key challenge to developing brain-machine interfaces is that lots of time, effort and money are needed to get experts and specialist equipment in one place to link up. This is what the researchers, based in the UK, Italy, Germany, and Switzerland, wanted to combat by connecting nerve cells with machines via the internet. 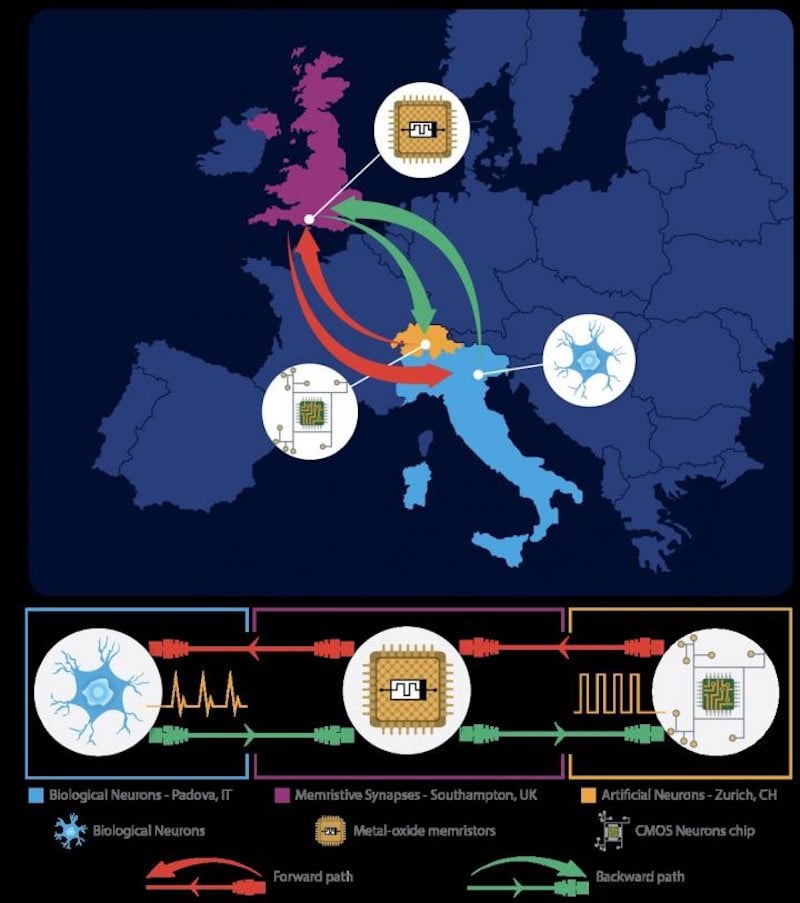 “To achieve the same outcome, scientists would have to be co-located, spending significant time in a place and resources for physically linking the capabilities,” said Themis Prodromakis, Professor of Nanotechnology at the University of Southampton, and lead author of the study.

There are several academic groups and companies also developing brain-machine interfaces, such as the US firm Blackrock Microsystems and the Dublin-based Medtronic. However, Prodromakis told me that this is the first time anyone has combined biological nerve cells, artificial nerve cells, and memristors into one system across the internet.

“It sets the basis for a novel scenario that was never encountered during natural evolution, where biological and artificial neurons are linked together and communicate across global networks; laying the foundations for the internet of neuro-electronics,” Prodromakis stated.

This study could pave the way for advances in neurological treatments. For example, it could lead to implanted AI chips that can help patients to control blood pressure, or prevent bladder problems caused by neurological conditions.

Image from Shutterstock and the University of Southampton