Confo Therapeutics has raised €30M in a Series A round that will take its unique technology to find drugs for historically undruggable targets to clinical trials.

The fundraising was led by the VCs BioGeneration Ventures and Wellington Partners, and joined by several other private and public investors. With the money, Confo Therapeutics aims to test its first drug candidate in humans by 2022.

The most advanced candidate targets fibrosis and has recently completed a first study in live animals. Two other undisclosed programs are closely following.

Part of the money will go towards further developing the company’s screening technology and scaling it up to industrial grade. This technology is designed to identify drug candidates that target G-protein coupled receptors (GPCRs). There are over 800 types of these proteins, and they are involved in multiple diseases, including cancer, schizophrenia, and Alzheimer’s — it is estimated that up to 30% of drugs in the market target GPCRs.

But many GPCRs remain undruggable. At least using traditional technology.

The main challenge is that GPCRs lose their structure when they are taken out of the cell membrane, where they are naturally placed. “GPCRs are flexible proteins that use conformational changes to transfer signals,” Confo Therapeutics’ CEO, Cedric Ververken, told me. “Our technology uses antibody fragments that stabilize and push the GPCR into the active state while maintaining the natural sensitivity of the receptor.”

Once the GPCR is locked in the active state, the company can screen for drugs that interact with it. Confo Therapeutics further optimizes the process by using fragments of the drug candidates being screened, which allows the company to screen about a million compounds where others might only screen a few thousand. 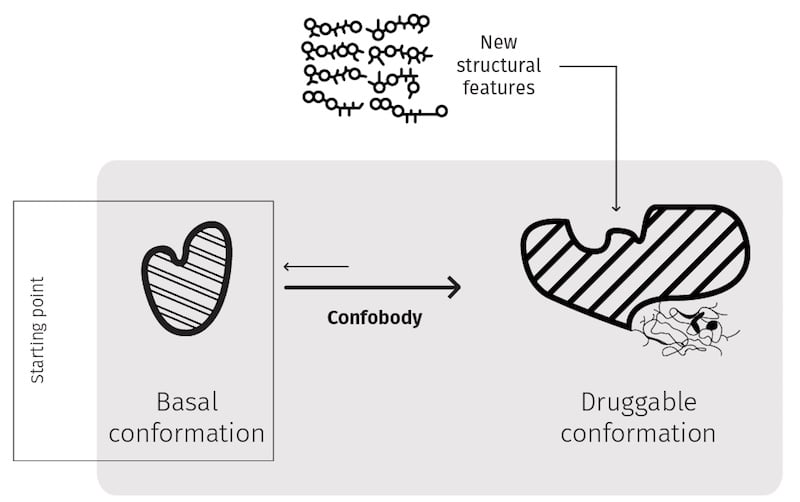 Confo Therapeutics was founded in 2015 as a spin-off from the VIB institute in Flanders and the Vrije Universiteit Brussel, where the antibody fragments used to stabilize GPCRs, called confobodies, were originally developed.

There are many other companies interested in unlocking GPCRs as drug targets. A notable example is Heptares, a British company acquired by the Japanese pharma Sosei back in 2015. However, most companies (including Heptares) stabilize GPCRs by introducing mutations into the sequence of amino acids that makes up the protein.

“You can find interesting candidates with amino acid mutations, but on the really difficult ones where the industry has been struggling for many years, we need a different approach. That’s where we come in,” said Ververken.

Indeed, this approach has attracted partnerships with two big names in the pharma industry, Lundbeck and Roche. According to Ververken, they saw his company’s technology as the solution to drug GPCR targets the companies had so far not been able to.

As part of its plan to furter develop its screening technology, Confo Therapeutics recently licensed from VIB a new type of antibody fragments known as megabodies. They are designed to improve the resolution of the 3D structure of GPCRs obtained through cryo-electron microscopy. This information can then be used to find drug candidates through computer simulations.