Just a month after the European Patent Office revoked a CRISPR patent from the competitors of Doudna and Charpentier, they have been granted a second patent that covers a new form of the popular gene editing tool.

The European Patent Office has granted CRISPR co-inventor Emmanuelle Charpentier, together with the University of California and the University of Vienna, a broad patent covering the use of the CRISPR-Cas9 system for a new application beyond gene editing.

The new CRISPR patent covers the use of what’s called a chimeric Cas9 enzyme, modified to inactivate its DNA-cutting function. “It becomes a targeting vehicle, so then you can hook almost anything you want to deliver it to anywhere within the genome,” Eric Rhodes told me. He is the CEO of ERS Genomics, a CRISPR company co-founded by Charpentier.

The most popular application of this form of CRISPR-Cas9 is in gene regulation. The Cas9 enzyme can be combined with a protein domain that either activates or inhibits the expression of the gene targeted by CRISPR without modifying its sequence. This is known as CRISPR-a (activating CRISPR) and CRISPR-i (inhibitory CRISPR).

According to Rhodes, the tool is becoming widely used in research, particularly for drug discovery. Using libraries of CRISPR targets, this tool can be used to find genes that, for example, enhance the effect of cancer drugs when they are activated or inactivated.

“It’s very similar to RNAi, only it tends to be more effective because it’s easier to design multiple guides that will work well for every gene,” Rhodes adds.

The patent will cover gene regulation using CRISPR-Cas9 in a broad range of settings, including bacteria, plants, animals, and also human cells. Meaning that the IP of any treatments based on this technology would belong to Charpentier and the Universities of California and Vienna. However, Rhodes points out that while there are possible therapeutic applications of this form of CRISPR, the biggest potential seems to be in research for now. 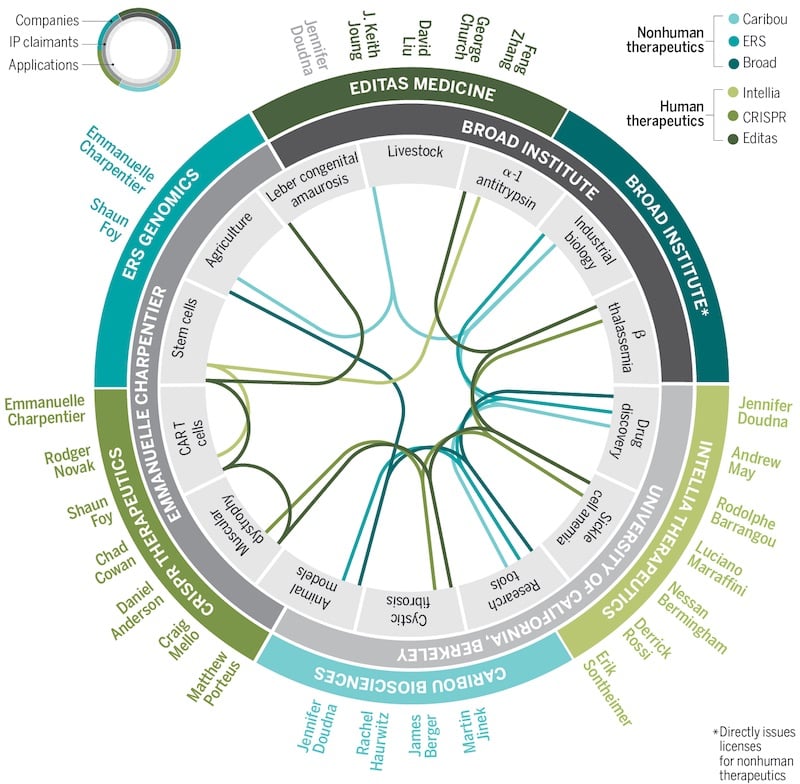 This is a big win for Charpentier and Doudna, who for several years have been involved in a fight for the ownership of the IP behind CRISPR against Feng Zhang and the Broad Institute. Zhang seems to be on the winning side so far in the US, but in Europe, the patent office is so far benefitting the Doudna-Charpentier team.

A year ago, the European Patent Office granted Charpentier a patent for the broad use of CRISPR-Cas9 as a gene editing tool. And in January, the office also revoked the first of several CRISPR patents filed by the Broad Institute citing a clear lack of novelty.

The different positions of the US and European patent offices seem to be polarizing the CRISPR field. If these trends continue, it seems like depending on where you use CRISPR, you’ll have to get a license from a different party. This might make it more difficult and expensive for some companies to make international development programs.