Today is Friday or Casual Day. Did you leave the suit and the tie at home to wear jeans and sneakers? Should you have done so?

More and more people do so on Friday but also the rest of the week.

The American Tech industry and the Silicone Valley started the movement. Steve Jobs is probably the most iconic one with his old New Balance, old Jean and the same Pull-over. Mark Zuckerberg and the “hoodie-fashion” is another good example. This more informal way of working has also crossed the atlantic. More and more CEO’s stop wearing suit to wear hoodies or just a simple shirt as for exemple Xavier Niel, very successful French entrepreneur and founder of telecom company Free. He wears a basic white shirt everyday even if his fortune is worth several billion euros.

This movement is now the rule in the Tech industry, both in America and Europe, but what about the Biotech Industry? 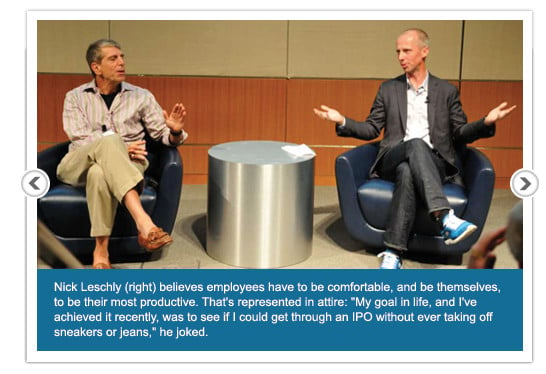 In the USA, Biotech CEO’s have already adopted this movement. Nick Leschly, who I met during LaBiotech Tour Boston is the perfect example. On the company’s website, on the about us page, is a photo of him with the following quote: “My goal in life, and I’ve achieved it recently, was to see if I could get through an IPO without ever taking off sneakers or jeans”. He achieved it recently by raising over 100 millions through one of 2013 most successful biotech IPOs in the US. Of course, there are other examples than him. Mark Levin, one of Boston’s top VCs, is often wearing flower shirts on conferences. A similar trend can be seen by comparing CEO’s style between the French documentary we made and the Boston documentary.

But why should a Biotech CEO wear Sneakers?

Wearing sneakers and jeans is being less formal and avoiding creating useless distance with people you are interacting with. Credibility should not be generated by your €1000 suit but by what you are doing. If you started a company like Bluebird 4 years ago and you already have plus 100 employees and raised over 300 million, you could wear whatever you want, you will be credible. Being too formal is also a sign of conservatism and anti-dynamic. By being less formal, CEO’s would give a more dynamic image of their Biotech company.

Lastly, not generating distance with people CEO’s are interacting with may have a lot of advantages. External people may reach out more easier to them generating additional opportunities. Internally to their company, they show the example and their employees would feel comfortable wearing sneakers or whatever they want. This would lead their employees to be what they really are and could allow them to be more productive. Good counter-example is Big Pharma companies were being formal is the rule. People judge each other on who has the best Hugo Boss suit or Hermes Tie. This leads to employees spending time looking at each other instead of working together making their company succeed even more.

What do you think, will you give a trial to a Sneaker day? Should more Biotech CEOs were sneakers?