A promising biotechnological approach or an innovative way of avoiding regulation? Large companies spend an average of €126M on the development of a genetically engineered crop (GMO), including €32M in regulatory costs. The Agriculture Department once takes two to five years to review applications, though it is trying to reduce that to 13 to 16 months. Targeted genome engineering (also known as genome editing) has emerged as an alternative to classical plant breeding and transgenic (GMO) methods to improve crop plants. Companies are now developing genetically modified crops using techniques that either are outside the jurisdiction of the Agriculture Department or use new methods — like “genome editing” — that were not envisioned when the regulations were created.

Until recently, available tools for introducing site-specific double strand DNA breaks were restricted to zinc finger nucleases (ZFNs) and TAL effector nucleases (TALENs). However, these technologies have not been widely adopted by the plant research community due to complicated design and laborious assembly of specific DNA binding proteins for each target gene. Recently, an easier method has emerged based on the bacterial CRISPR (clustered regularly interspaced short palindromic repeats)/Cas (CRISPR-associated) immune system. The CRISPR/Cas system allows targeted cleavage of genomic DNA guided by a customizable small noncoding RNA, resulting in gene modifications by both non-homologous end joining (NHEJ) and homology-directed repair (HDR) mechanisms.

Cas9, a hallmark protein of the type II CRISPR-Cas system, is a large monomeric DNA nuclease guided to a DNA target sequence adjacent to the PAM (protospacer adjacent motif) sequence motif by a complex of two noncoding RNAs: CRIPSR RNA (crRNA) and trans-activating crRNA (tracrRNA). The Cas9 protein contains two nuclease domains homologous to RuvC and HNH nucleases. The HNH nuclease domain cleaves the complementary DNA strand whereas the RuvC-like domain cleaves the non-complementary strand and, as a result, a blunt cut is introduced in the target DNA. 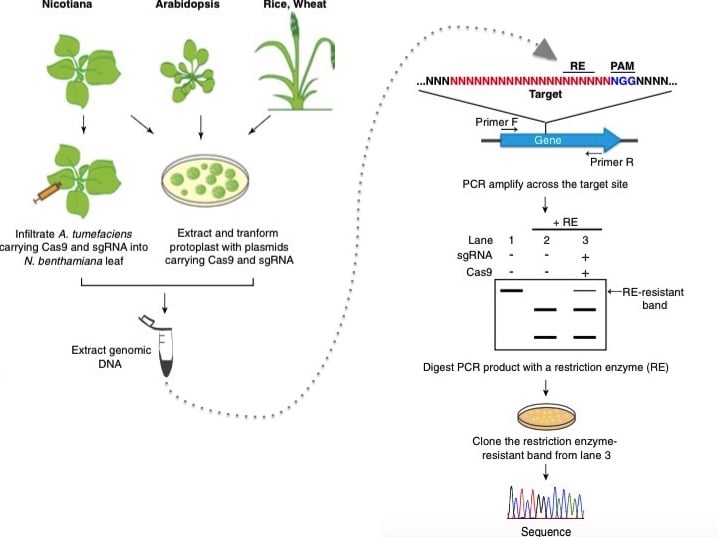 As described in the article CRISPR Therapeutical Revolution, the simplicity of this system gives the extrem modularity and opens wide range of therapeutical opportunities as well as some possible drift in the respect of the integrity of the food industry.

The CAR-T technology that we have already spoke about, relies on genetically manipulating T-cells, programming them to produce antigen receptors that bind to unique cancer cell proteins. CRISPR is an obvious choice of tools to handle this step. Several of our articles relates deals around this relatively new technology : Merck Serono and Intrexon, but also Novartis.

The process of then turning those genetically altered cells or tissues into a full plant can itself induce mutations. The new editing process involves the use of naturally occurring genetic material and uses a gene gun, rather than bacteria, to deliver the desirable DNA material into the plant. Critics say the editing process merely takes advantage of loopholes in the laws and amounts to the same thing as traditional genetic modification or GMO. Altered crops can have significant and irreversible negative impact on the environment. The trend alarms critics of biotech crops, who say genetic modification can have unintended effects, regardless of the process.

“They are using a technical loophole so that what are clearly genetically engineered crops and organisms are escaping regulation,” said Michael Hansen, a senior scientist at Consumers Union. He said the grass “can have all sorts of ecological impact and no one is required to look at it.”

Even some people who say the crops are safe and the regulations overly burdensome have expressed concern that because some crops can be left unregulated, the whole oversight process is confusing and illogical, in some cases doing more harm than good.

Companies using the new techniques say that if the methods were not labeled genetic engineering, novel crops could be marketed or grown in Europe and other countries that do not readily accept genetically modified crops. In one word, distrust. Further experiments have to be done and the regulation, laws need to adapt themselves to the new technology to avoid ethical infringment.