It’s a brand-new field and possibilities seem infinite. Here’s what you need to know about its rapid development into a powerful genetic tool.

What if you could activate and deactivate neurons by simply switching on the lights? That’s the basis of optogenetics, the control of cell behavior via light-sensitive proteins.

Optogenetics is a very young field, thought to have started back in 2002, which has significantly grown over the last decade. Since then, it has been explored as a method to restore eyesight, to treat arrhythmia and to precisely control the growth of bacteria.

But one of the areas where it presents more potential is neuroscience. The technology allows for the control of specific neurons in living animals and monitoring the effects in real time. It can be used to precisely map brain circuits responsible for a particular behavior, such as fear or drug addiction, and as a therapy for neurological diseases like epilepsy or Parkinson’s. Neurons can be easily controlled using a method that is fast, with responses at the millisecond scale, reversible and cell specific. 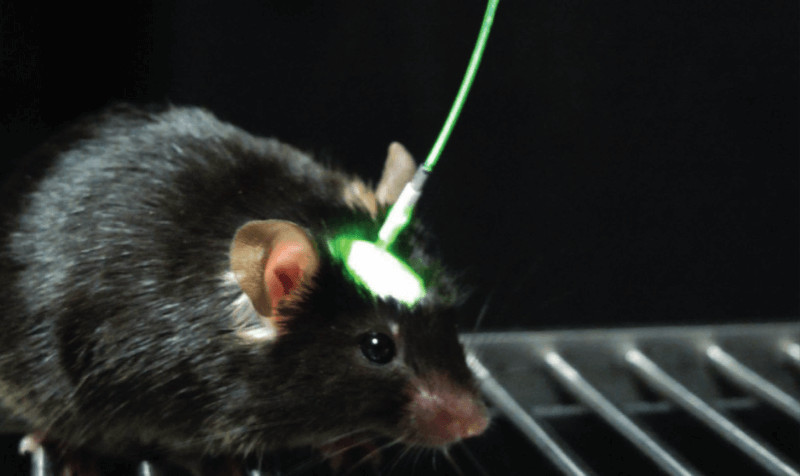 How does it work?

As it name indicates, optogenetics relies on genes to introduce light-sensitive proteins in specific cells. These proteins are most commonly opsins, membrane proteins that transform optical input into electrochemical signals within the cell. These proteins can be found in the retina, but those used in optogenetics are typically of microbial origin because they have a simpler structure and transmit signals faster.

When the opsin is excited, it induces the exchange of ions across the membrane, changing its potential and either activating or inhibiting neuronal activity. The fast reaction time of the proteins allows a researcher to test how different frequencies in the light pulses affect behavior. And since different opsins are excited by light at specific wavelengths it is possible to combine several of them in a single animal.

The possibilities seem unlimited, but for the technique to work properly, efficient delivery and expression of opsin genes to the target neurons are critical.

Lentiviral vectors are one of the tools of choice for genetic engineering in optogenetics. Viral vectors take less effort and time than creating transgenic lines. And among them, lentiviral vectors have a larger capacity, which allows including several elements, such as large promoter and reporter genes, in the final construct.

Here is where GEG Tech comes in. The French company has an extensive catalog of lentiviral vectors to choose from, with a big selection for optogenetics applications. Its scientists have edited and created lentiviral vectors with different features to match the needs of any particular application. For example, they can control if gene expression is either transient or long-term and whether the genetic material is integrated into the host, as well as include multiple promoters and reporters. And if a client needs another promoter or another reporter, GEG Tech will design a customized new lentiviral vector.

The company also offers help for lentiviral vector users through explanatory videos, online protocols and extensive information on the properties, safety and regulations concerning the genetic tools. If you want to know more, pay a visit to GEG Tech’s website!

Despite being a very young field, optogenetics is already starting to make noise in the biotech industry. We’ll bring you the latest news as more and more applications of the technology emerge in coming years.