Last Thursday at Genesis in London, I had the chance to meet with Eva-Lotta Allan, CBO of Immunocore (and previously from Ablynx). After a last-minute confirmation before the event, we came to meet and it helped me understand why Immunocore could be the next Biotech success-story in Europe…

I’m sure you’ve heard of Immunocore this year. This Oxford-based Biotech company is developing TCR-based immuno-oncology treatments and has raised nearly €300M ($320M) in its last round of fundraising – a pure anomaly for the European standard.

Even worldwide, this is the second private biggest fundraising ever for a Biotech company after Boston-based Moderna (my exclusive interview of the CEO here).

After being in London, I did a stop in Paris and talked with a friend at the VC Edmond de Rothschild. He told me they were impressed by the company:

“Immunocore could become the next Amgen“.

So then, what is so promising about this company…?

Eva-Lotta, I saw you have a common history with Munich-based Medigene and Oxford-Based Adaptimmune. What’s your link to them?

Yes, it’s a bit of a complicated story. Our CSO Bent Jakobsen founded Avidex in 1999 in Oxford (UK) and the company was acquired by Munich-based MediGene in 2006. Then in 2008, Adaptimmune and Immunocore were spun out of Medigene to be run as an independent companies.

Today, Bent Jakobsen still serves as CSO to both Immunocore and Adaptimmune, and continues to bring his outstanding knowledge about TCR-based drugs to the company bases.

How do you differentiate from Adaptimmune then?

Adaptimmune is using adaptive T-cells therapies (similar to CAR-T), whereas we don’t take the cells from the patients. We use a bispecific biological reagents, called ImmTAC, that combines a T-Cell receptor (TCR)-based targeting system with an anti-CD3 flagging system to attract T-Cells.

Basically, our molecule binds strongly to the cancer cells, which then attract T-Cells to destroy the tumor.

This seems wonderful in theory. What about the clinical trials?

Our most advanced and fully-owned compound (IMCgp100) is now in Phase II for Malignant melanoma (skin cancer) and in Phase I for Uveal melanoma (melanoma of the eye). Both cancers have high-unmet medical need and we have shown good data from the trials so far.

What is even better is that we have shown that we needed only 50 micrograms of our compound to reach maximum tolerated dose (MTD) and to avoid toxicity. We have been in discussion with the EMA and already obtained its fast track “label” and the promised reimbursement linked to it.

Editor’s note: It’s interesting to see that Immuncore’s most advanced compound is still fully-owned and that it signed partnerships only for the next ones. It’s usually the opposite, leading Biotech to have options on their biggest assets and making it more difficult to build independent companies.

You’ve signed up with a partner ‘Dream-team’ to move forward. How do you collaborate with them? 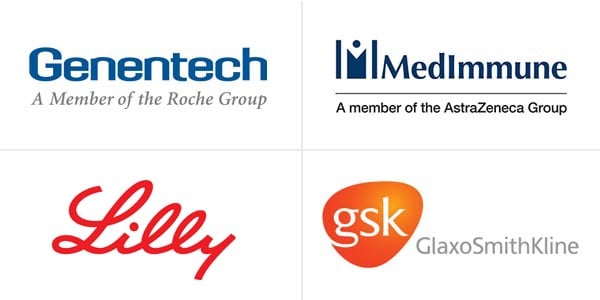 Yes, we’ve signed 4 deals so far with GSK, Genentech, MedImmune and Eli Lilly. The first three are “traditional” discovery deals and the one with Eli Lilly is a co-discovery deal. Eli Lilly pays €13.8M  ($15M) upfront per program and €9.2M ($10M) again if it wants to pursue the program, and then we also have an option to co-develop and co-promote the product.

This means we take more of the risk, but could also get more out of the deal if the clinical trials are successful. Right now, these collaborations are still at a pre-clinical stage.

These compounds could rapidly move forward as we have been allowed by the FDA and EMA to move directly from cell-based test to human trials, as we have developed robust in vitro tumor tests.

Editor’s note: Again interesting that Immunocore is willing (and has the ressources) to co-develop a compound with a Big Pharma. This can lead to build up a more sustainable company on the long-run.

Your “sister” company Adaptimmune uses a cell-therapy approach, which shows limited efficacy against solid tumors and faces lot of challenges for example on the pricing side. Is it also the case with your platform?

We are not limited to liquid tumors, and neither is Adaptimmune, and we could do both in the future. This increases significantly the potential of our platform. Moreover, our biologicals are easier and cheaper to produce. This gives us a unique market access opportunity for the future.

This was really a great chat. I was always wondering why Immunocore raised such a crazy amount of money and now I’m start getting it:

It combines an excellent technology, a lot of clinical potential and a low final price. And in addition, Immunocore has assembled a very high-level management team (probably one of the best in Europe – which just expanded last week) and solid financing to move forward.

Their goal is to build a sustainable and successful company as there are very few in Europe – Actelion and Morphosys being the best examples. It’s definitely a company to watch closely in 2016 after such a crazy 2015 year for them…

Update 21/12: Immunocore signed a deal with Eli Lilly and not with Johnson & Johnson, as stated initially.