Isabelle De Cremoux is the CEO and President of French VC fund Seventure Partners, famous for having opened Health for Life Capital, a €160M fund dedicated to the Microbiome.

Having previously worked in the business development team of Pfizer as well as Fournier/Abbott, Isabelle created the lifesciences department when joining Seventure, which she manages as CEO for over 3 years now.

Seventure is an active investor in Europe, managing about €600M. In addition to these activities, it has successfully launched 2 institutional funds at the end of 2013, one of which was the Health for Life Capital fund, which has now amassed around €160M from partners like Novartis and Danone.

Now 3 months later, I was curious to know where they stand…

So Isabelle, could you provide me with an update on the first 3 months of the fund?

Everything has been running smoothly since the opening. We have done 8 deals so far, five purely into Microbiome focused enterprises from France: Enterome (Paris), TargEDys (Rouen), Maat Pharma (Lyon), Eligo Biosciences (Paris) and LNC (Bordeaux).

Then 3 are in clinically proven nutrition and diagnostic field (which is closely linked to the microbiome): Cambrooke (Boston), Myco Technology in Denver (Colorado) and Humedics (Berlin).

We have covered Enterome, Maat Pharma and Eligo fairly well, but less so for LNC and TargEDys. Why did you invest in them?

TargEDys is our latest investment, where we led a €5.8M round. It’s a startup Biotech based on the research of Serguei Fetissov and Pierre Déchelotte in Rouen, one hour away of Paris,

The technology has been developed in the hospital there and is targeting the link between Neurological disease and intestinal health. The goal is to treat patients with eating disorders and metabolic deregulation (from Obesity to anorexia and cachexia).

They also published a frankly spectacular study showing that bacteria in the gut were producing hunger hormone mimetics (such as Ghrelin).

The seminal discoveries from Fetissov and Déchelotte have brought to light the first clear molecular mechanism in the emerging field of ‘gut-brain axis‘, with immediate applications in metabolic disease.

And what about the LNC?

Laboratoires Nutrition & Cardiométabolisme (LNC) is based in Bordeaux south-west of France. It’s developing an oral product modulating the activity of certain bacteria involved in obesity.

What makes this company unique is that it already finished its Phase III study on 110 patients and it’s preparing a market launch.

It’s really one of the more unique Microbiome companies worldwide, having already finished its clinical development…

How many more investments will you make?

We plan to make at least 25 investments in the Microbiome field and have a very busy period right now. The Microbiome is really getting great traction in the financial world, with always more investment, startups, deals and dedicated events (4 on the east coast last week alone, compared to 4 in the whole year of 2014 worldwide).

We are both investing in Europe and in the USA, but have no dedicated team yet over there. For the moment, we are managing all from Paris and from London/Geneva/Basel where we have offices.

It definitely seems to me that the Microbiome is getting “hype”. Which indicators are you looking at?

One indicator I like to look at is the evolution of the number of publications with the tag Microbiome compared to other keywords such as Biotech. Here’s the graph I made with Pubmed data: 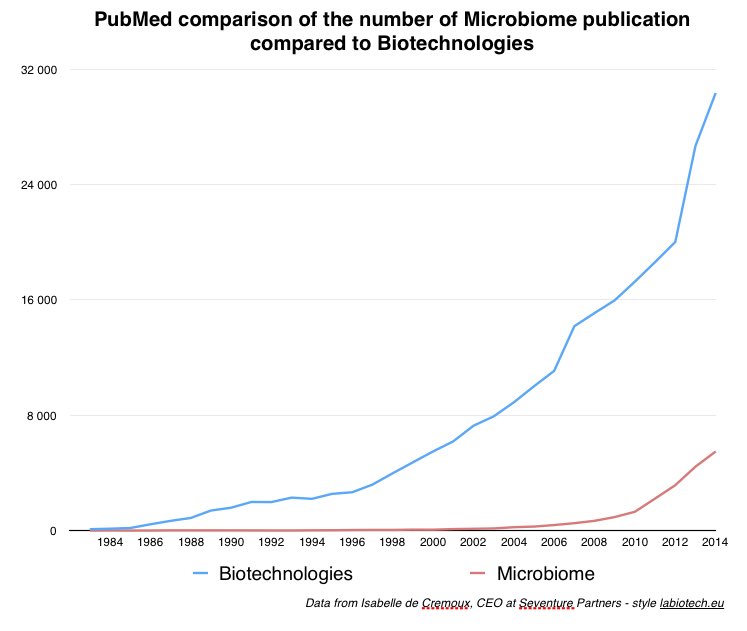 You can clearly see that the Microbiome is getting serious traction in the scientific community. It’s at a similar or even faster pace than Biotech was at the same point in time.

This is just one of the many indicators you can look at but from my experience, PubMed is really reliable…

It was great talking with Isabelle. She gave me way more really interesting figures, views and a reliable indicator on the Microbiome field.

As she will be presenting at Labiotech Refresh on the 24th of this month here in Berlin, I’m sorry, but I cannot tell you everything now, it would be too easy…You’ll just have to come see her live 😉