Artist Mellissa Fisher built a human sculpture carrying the myriad of invisible bacteria that live on our bodies to highlight the global threat of antibiotic resistance.

Journalist Michael Mosley enters the lab and sees a replica of his own body. All over it, bacteria of all sizes and colors grow, competing with each other to occupy the surface of his body replica.

The sculpture is called Microbial Michael. The body is made of agar, a jelly-like material derived from algae that is often used in labs to culture bacteria by imbuing it with the nutrients the microbes need to grow. After casting Mosley’s body and creating an agar replica, different parts of his body were swabbed to transfer the bacteria to the sculpture.

Thus, the bacteria that inhabit our bodies become visible to the eye. But taking a closer look, one can see that the two halves of the body cast look different. The left side is covered with a broad spectrum antibiotic, which killed most of the bacteria that were swabbed from Mosley’s body.

However, some bacteria still grow on the side covered with the antibiotic. Although they are part of the healthy human microbiome, at times when the immune system is compromised they can become a problem as they cannot be easily eliminated. There is also the possibility that they transfer the genes that make them resistant to antibiotics to pathogens that invade our body. 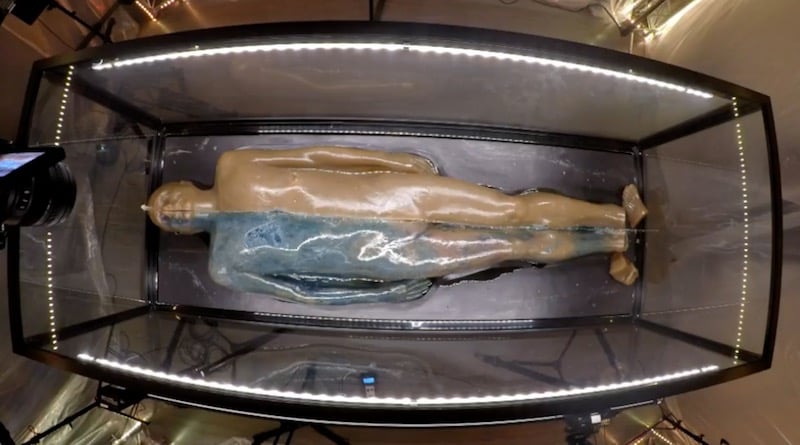 Every time we take an antibiotic, some of the bacteria that form our microbiome can develop resistance to the drug. Both the overuse and misuse of antibiotics — for example if you take the antibiotic for a shorter period than prescribed — increase the chances of bacteria developing resistance. Antibiotic resistance is becoming a big problem, and there have already been cases reported in which none of the antibiotics available were able to fight the infection.

Antibiotic resistance is a pressing issue, but, like bacteria, the threat is invisible in our day-to-day lives. Mellissa Fisher, the artist behind the sculpture, worked with Mark Clements, a biology Professor from the University of Westminster, to make them visible. Together, they aim to bring biology closer to people.

Other artwork Fisher has made in collaboration with Prof Clemens includes a series of self-portraits on which the microbes of the artist’s face grow. The duo is now running a series of workshops at the Eden Project, in Cornwall, UK, focused on visualizing the human microbiome. Fisher is also experimenting with using natural dyes to visualize bacteria and fungi living in the soil and in plants, and visitors can see her at work at the Eden Project until August 13, 2018.