Merck has opted to return its Phenylketonuria (PKU) candidates Kuvan and Peg-Pal back to BioMarin from January 2016. Merck will instead focus on other R&D areas, and will receive €340M in compensation (5 times the annual sales of Kuvan) with €180M for future Peg-Pal milestones. This appears to support the back-peddling trend of major Biotechs invested in rare diseases.

Kuvan was originally developed for the autosomal recessive disease Phenylketonuria (PKU) in a joint effort by Merck-Serono and California’s BioMarin. Licensed and marketed by Merck, Kuvan went on to receive world-wide approval for use as an oral treatment for PKU by both the EU EMA and US FDA since 2007. Now Merck has decided to relinquish its licensing rights of Kuvan and Phase II PKU drug Peg-Pal. BioMarin will also compensate Merck with €180M in milestone payment Peg-Pal’s development.

Phenylketonuria is a rare genetically conferred metabolic disease, where the amino acid phenylanaline (PHE) is not broken down properly. This is due to a dysfunctional phenylalanine hydroxylase (PAH) enzyme resulting from a deficiency of the enzymes co-factor Tetrahydrobiopterin(BH4). This leads to high PHE levels (due to lack of PAH function) which cause a wide range of psychological symptoms necessitating  life-long dietary management. 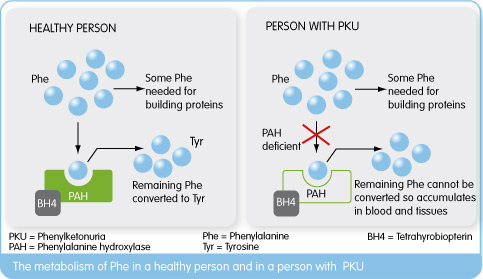 Kuvan (BH4) acts a replacement to this naturally occurring PAH co-factor, in order to keep phenylalanine levels under control. Peg-Pal on the other hand, looks to treat patients where Kuvan may not sufficiently work in lowering PHE levels, by instead replacing PAH with a recombinant version of the enzyme. After being granted US Orphan Drug Designation by the FDA, Peg-Pal is now in its phase II clinical trials for PKU patients who don’t respond to Kuvan treatment.

Merck is framing this return of Peg-Pal and Kuvan licenses to BioMarin as a positive move for PKU patients. However, in business terms it is clear that Merck no longer views the rare-disease market (such as that for PKU) to be as lucrative as it initially hoped. Instead, R&D focus will be turned to the immunotherapy field, where there is a diverse range of platforms (e.g. through their partnership with Pfizer) to launch new blockbusters off.