Up to now, a vast majority of antibodies targets proteins. Why not targeting something else? ImmuSmol, a start-up based in Bordeaux South of France is developing monoclonal antibodies against small molecules involved in tumor immune escape. This French start-up has just raised €500k to complete its preclinical proof-of-concept.

Bordeaux is one of the biggest wine regions in the world but it is also a Biotech region. A few Biotechs are emerging from the different universities and engineer college in the area. ImmuSmol is one of them. Founded by Alban Bessede, former CNRS scientist, it is a great example of technology transfer. Bessede discovered mechanisms concerning small molecules (amino acids or amine acids metabolites) released by the body or tumors which decrease immune system activity (published in Science). This is one strategy tumors use to grow. But what if we could capture or inactivate these small molecules before they could cause any damage? This is the main idea of the company and they try to reactivate immune system to fight cancer by using monoclonal antibodies specific to these small molecules. 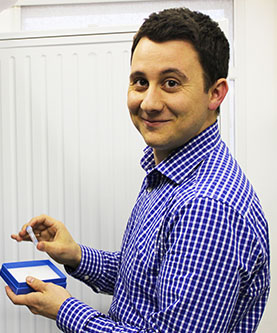 Alban Bessede told LaBiotech on the phone: « Immunotherapy is a new therapeutic approach to fight cancer by helping the immune system instead of targeting cancer itself. This approach has shown positive results recently and we believe our strategy could have a significant impact on cancer fight. »