That’s what Zami Aberman, CEO of one of the world-leading cell-therapy company Pluristem told me during our lunch at Berlin this week. An enthusiastic statement for a sector that could indeed be the next blockbuster after the monoclonal antibodies.

Pluristem is an Israel based Biotech company developing off-the-shelf cell therapies for a variety of human diseases. What makes it different is that it uses human placenta cells from donors instead of the patient’s own cell. These ones are not genetically modified but the proprietary production process of the company will “train” them to effectively deliver a mix of proteins to the patients once injected.

The company now counts 160 employees and is publicly listed on the NASDAQ. It’s market cap has decreased by 50% over the last six months and is now $120M.

Zami Aberman is a veteran of the cell therapy industry – he has been with Pluristem for over 10 years and is a board member of the Alliance for Regenerative Medicine. As he told me, he is a true believer in the theory that you need 10 000 hours to become a real expert of a field, hours he has at his counter in the Cell Therapy field.

That’s correct. We use cells to precisely deliver a cocktail of proteins during a long period of time. Once we have extracted the cells from the placenta of the donor, we “train” them in our proprietary manufacturing process to enhance their properties and “prepare” them to produce the willing cocktail of proteins.

The cells are then injected intra-muscularly into the patients, and will remain there for 4 to 6 weeks (compared to 3-4 days when injected intra-venously). During this time, they interact with the immune system and secrete the cocktail of proteins needed to fight the disease. 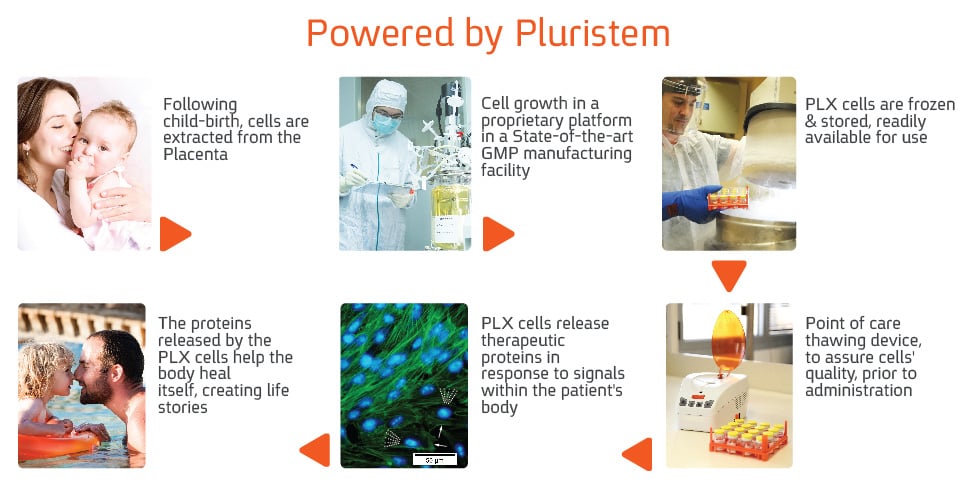 What’s the difference then compared to injecting the cocktail directly?

That’s a good question and we actually tested it an Animal model. We injected both the cells and the lysis of the cell. During the first two weeks, we had the same results. But after the second week, the cells take superiority because they continue to secrete and adapt in regard to the body’s signals. This ultimately generates a way stronger response in the patient. You could theoretically obtain the same response if you measured a blood control every day whilst adjusting the dose accordingly.

What’s your most advanced programs based on this approach?

We now have two different cell types, one tested in humans and the second will start clinical studies in the first half of 2016. For the the first product, which has an indication to do with blood vessel growth, there are two Phase II trials, and two in Phase I. The second product (which has just announced will start Phase I clinical trial in bone marrow failure) is a kind of a “super-EPO” (erythropoeitin – the growth factor to enhance red blood cells).

For both products, we have the same manufacturing process but we change the culture environment to induce the secretion of different cocktail of proteins. 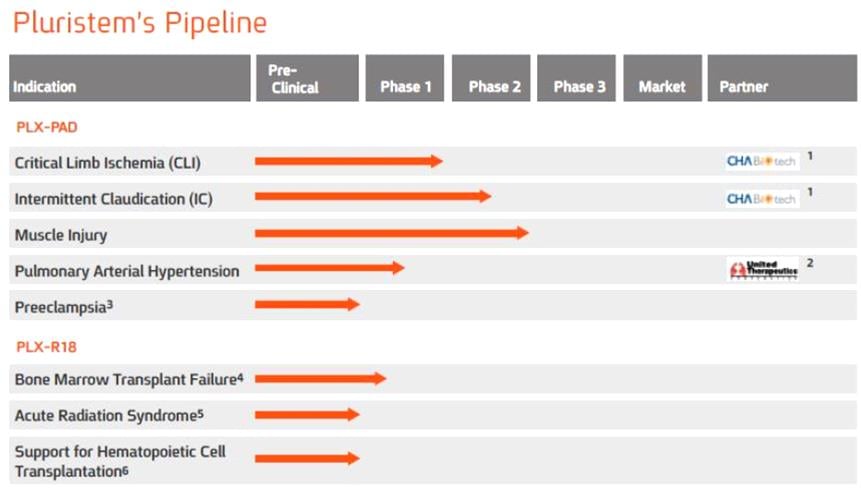 I was surprised to hear you are using placenta cells from donors to develop your cell-therapy, whereas other companies of the field either use the patient owns cells (autologous approach), or they reduce the immunogenicity from donors cells in order to be able to inject them afterwards. Could you explain to me why you choose this approach?

The beauty with placenta cells is that they have full capacity and don’t express all the receptors yet, especially the ones inducing an immune response. This means we can use the cells from donors to produce a “standard” cell therapy that fit all patients.

From one donor in Israel, we are able to produce 10,000 doses that we ship and inject in the US, Europe, Japan and Korea. This actually makes it an extremely powerful allogenic approach, which ultimately reduces the price of the drug. Thanks to it and to our 3D proprietary production process, we are able to “produce” one million of cells for just a few dollars.

Editor’s comment: Autologous vs. Allogenic is a big debate right now. Autologous approaches use the patient’s own cells whereas Allogenic uses cells from one donor to treat several patients. The latter is more ideal and impacts massively the scalability of the drug. For example, the autologous CAR-T treatments raises doubts because of their expensive price of (at least) $250 000 per patient, challenging the healthcare system.

CAR-T, or in general the use of cell-therapy for Oncology, seem to be very hyped. Have you any plans to move into this field as well?

Yes, indeed, the sector is very hype for the last 3-4 years. Novartis has shown one miracle saver, and the companies of the space have signed massive deals with Big Pharma. But we are experts in Placenta cells, and not T-Cells. We believe that allogeneic cell therapy is a better way, Therefore, we currently investigate this possibility, today we don’t have any fixed plans in oncology but we are looking closely at the evolution of the field.

Last question, what’s the impact of being based in Israel for your cell-therapy business?

We have many benefits of being based in Israel. We have access to highly talented people in a reasonable cost to hire than in the US. The government is also very innovation-friendly with 50% of our R&D covered. But of course, there are also drawbacks…

It’s far away from nearly everything. As a result, me and the top-executives are traveling at least two weeks per months. It also impacts the finances of the company with foreign companies being generally disadvantages in the US compared to local companies.

Talking with Zami was a great experience. Pluristem impressed me by their original approach of using placenta cells (not stem cells) and for their unique manufacturing process (I could have expanded on it way more).

The next steps and results will be key for the company to show that its approach is both efficient and economically more attractive than the other cell-therapy.

P.S. Here is a nice view from our lunch table at the restaurant of the fancy Adlon Hotel in front of the Brandenburger Tor. 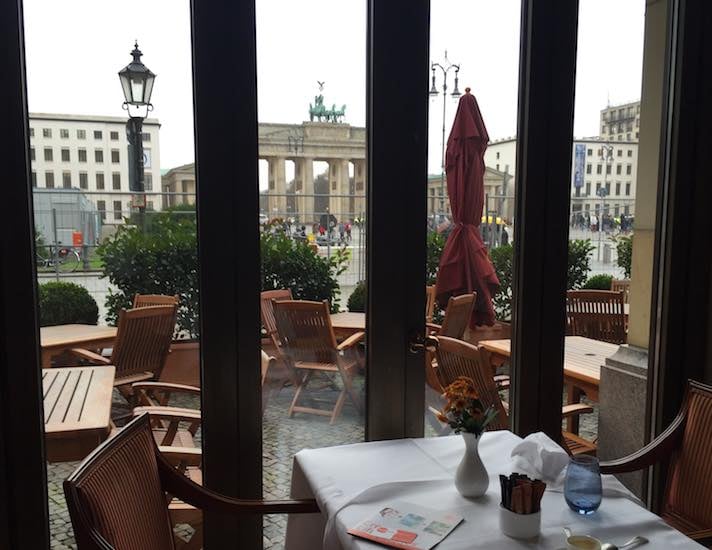