Novartis just paid the bill to Humabs to use its out-licensed drug candidate in a Phase II clinical trial. This monoclonal antibody was developed thanks to Humabs’ technology platform using antibodies from cured patients.

Back in 2009, Humabs and Novartis entered into an exclusive licensing agreement for the use of selective human monoclonal antibodies discovered by Humabs’ proprietary Cellclone technology. A Novartis program, based on this technology, has entered into phase II clinical trials in the U.S. and Germany, triggering the payment of the milestone.

The trial is being conducted by Novartis and is designed to assess the efficacy and safety of the antibody for the prevention of human cytomegalovirus (hCMV) replication in approximately 80 patients undergoing stem cell transplantation.

hCMV is a ubiquitous herpes virus, generally dormant and asymptomatic. However, it frequently develops a clinically significant disease in immuno-compromised patients, and has also recently been implicated in a number of population-wide chronic conditions including atherosclerosis, type 1 diabetes, inflammatory bowel diseases, lupus and other diseases.

Humabs discovers and develops superior antibodies directly derived from individuals, who have successfully overcome major diseases. Once identified, Humabs isolates and clones B-cells or Plasma cells from the donors to screen their antibodies. They then screen the best antibodies, determine the coding gene and clone it. Only thing left to do is non other than the subsequent pharmaceutical development to have functional monoclonal antibodies. 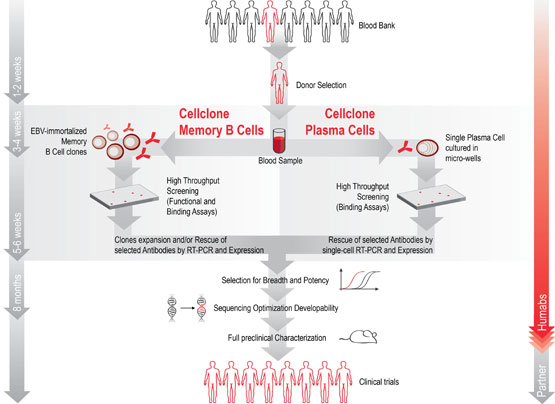 The company currently focuses on infectious diseases, but has also selected antibodies against inflammatory diseases and cancer in its pipeline.

According to Alcide Barberis, Humabs’ CEO, the company has been making profits since the beginning of 2014, thanks to licensing agreements with MedImmune, the biological subsidiary of AstraZeneca.

This new milestone payement, undisclosed but certainly important considering the beginning of phase II, will consolidate the current financial situation of Humabs and give more credit to its Cellclone platform.

Alcide Barberis is also confident for the rest of the pipeline and wants to push one program forward to the clinic by seeking a co-development partner.