The Museum of the History of Science in Oxford is hosting an exhibition on the history of penicillin and the current challenges of antibiotic resistance featuring the first culture used to extract the antibiotic.

The discovery of penicillin by Alexander Fleming in the early 20th century changed the world of medicine. Antibiotics have saved millions of lives since then, and, almost 90 years later, the scientist still has ardent fans. Last week, Fleming’s “mold that first made penicillin” was auctioned in London and sold for a whopping €13,710 ($14,597).

For those that cannot afford their own penicillin memento, the Museum of the History of Science in Oxford is now hosting an exhibition, “Back from the Dead: Demystifying Antibiotics“, which celebrates “the 75th anniversary of penicillin as a life-saving drug”. There, you can see for yourself some of the original equipment and cultures that were used to study and develop the world’s first antibiotic. 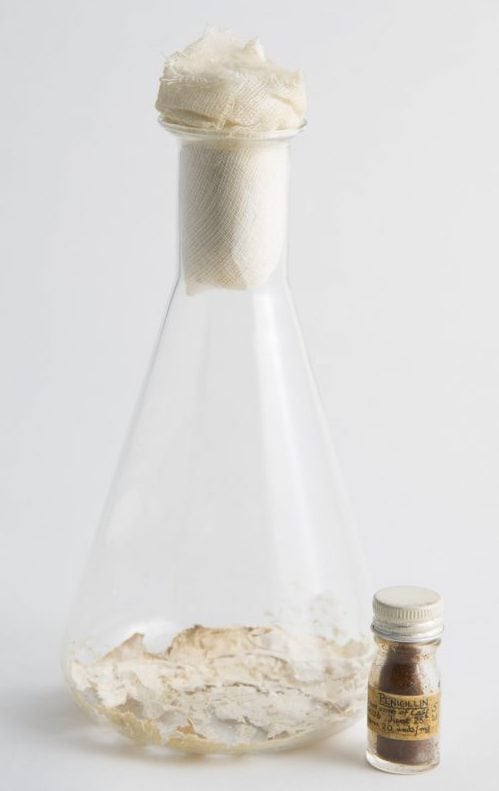 Fleming published his discovery in 1929, but he was unable to extract penicillin in large enough amounts to treat patients with it. Howard Florey and Ernst Chain, scientists at Oxford University, took on this challenging task, which took 10 years, and the three researchers shared the Nobel prize for medicine in 1945. The exhibition features some of the original flasks and cultures they used in their first attempts to scale up penicillin production.

The exhibition also honors the role of Dorothy Hodgkin, an Oxford biochemist that pioneered X-ray crystallography decades before Rosalind Franklin used it to elucidate the structure of DNA. She used the technology to unravel the molecular structure of penicillin. Afterward, she took on the structure of vitamin B12, for which she received a Nobel prize in chemistry in 1964.

The exhibition introduces visitors to all the men and women behind the series of scientific breakthroughs that led to the development of modern day antibiotics. The museum is also showcasing “Ex Voto“, a growing collaborative artwork in which visitors attending talks hang votive offering from strings dyed using bacteria and antimicrobial compounds. This piece was created by Anna Dumitriu, a well-known British bioartist that explores the world of bacteria.

The ultimate goal of the exhibition in Oxford is to make the public reflect on the importance of antibiotics and the challenges that are still ahead of us. You can visit it until May 27!

Images from the Oxford Museum of the History of Science