The first intelligent artificial heart has been twice implanted in France within clinical trials. It has been developed by French company Carmat, and famous cardiologist Alain Carpentier, after 20 years of development. This important breakthrough nevertheless create a polemic. Artificial hearts already existed and voice talks about an artificial financial bubble around Carmat. On September 11th, main French television channel France 2 released a documentary film attacking Carmat. The public stock lost 7% on the next day, 12% until now and Carmat tries now to stock the polemic. 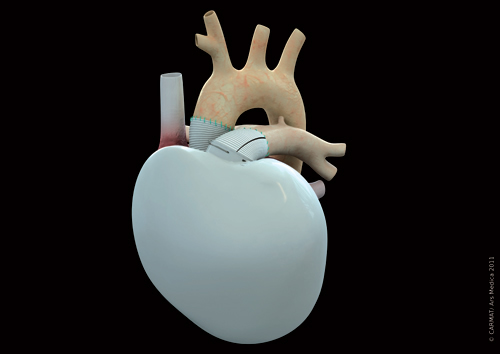 This heart has been developed during 20 years in collaboration with engineer from EADS (Airbus manufacturer). It is the first heart using biological tissues and which is intelligent with blood pressure mesure to adapt the rhythm to the body’s needs. Costing approximatively €150 000, it is a technological marvel. It has been partially financed by Philippe Pouletty, great French Biotech entrepreneur, through his Venture Capital found Truffle Capital. Since its founding, it has raised €53 millions and is now a public company listed on NYSE Euronext with a €342 million value. The product developed has fascinated an important part of the planet. Article has been published in almost all the major magazine, including Wall Street Journal and New York Times, and on Television. This “buzz” is pretty unique for a Biotech/MedTech company but the artificial heart has lot of meanings and would resolve a big public health problem that is the lack of heart for transplantation. Today, 20 millions european and americans are in cardiac insufficiency situation including 100 000 severe cased. These ones are not eligible to a transplantation and are targeted by Carmat’s heart. The next steps could be to target a larger population of patients – only 4000 transplantations are done in average each year. Tomorrow, we could imagine all the transplantation made possible and of course a huge market for the company. Because of the buzz, the important breakthrough and the huge impact it could have on life of patients, the value of the company is extremely high and it is in the spotlights.

Spotlights brings positive and sometimes negatives. France 2, main French public channel, has published a documentary about the company on September 11th. They attacked the company for two reasons:  stock price manipulation made by Philippe Pouletty himself and overestimated commercial potential. Only a maximum of 50 000 transplantations could be operated, says interviewed experts, reducing by half the potential market. The documentary also compare this new heart to the existing ones. Both main competitors, Syncardia and Jarnik, are artificial heart already working and used by clinician. Nevertheless, it is mainly a pump, installed externally and having only a temporary usage to wait for a transplantation whereas Carmat’s heart could be able to replace the natural heart.

Of course, Carmat answered to the polemic and to the consequences it has on his stock price. A massive communication campaign has been sent out with articles published again in all major newspapers in the World and interviews given to major medias. They go through different facts given by the documentary. The press release explains that this heart is not the first ever in the world, that the heart only targets a small amount of the 20 millions people who could need a transplantation (less than 100 000 potential patients) and that the company never said it could replace a transplantation.It also precise that the heart is not commercialized yet but only in clinical trials using an industrialized version of the first prototype as laws requires. The conclusion publicly says Carmat could pursue legally anyone to protect its rights and the commercial success of the company. Will they attack French Television that brought them into the spotlights and previously increased their stock value ?