Probiodrug has disclosed encouraging results of its latest Phase IIa trial to assess its lead candidate PQ912 in patients with early Alzheimer’s Disease.

The German biotech Probiodrug is pioneering new approaches to eliminate pyroglutamate (pGlu)-Abeta, a peptide that has been linked to the formation of toxic oligomers involved in Alzheimer’s disease. Now, the biotech came out with its most recent Phase IIa results for its lead candidate PQ912, revealing beneficial effects on synaptic function in early Alzheimer’s patients.

PQ912 is a small-molecule inhibitor of the glutaminyl cyclase (QC), a key enzyme involved in the generation of toxic pGlu-Abeta. Apart from validating safety and tolerability of Probiodrug’s lead asset, the biotech also set out to detect early signals on a number of secondary outcome measures, including the extent of QC inhibition, markers of synaptic dysfunction, and assessments of working memory.

“These results point to a direct effect on pGlu-Abeta with beneficial effects on synaptic function, even in such a short treatment period,” commented Philip Scheltens, Principal Investigator of the study, in a press release. 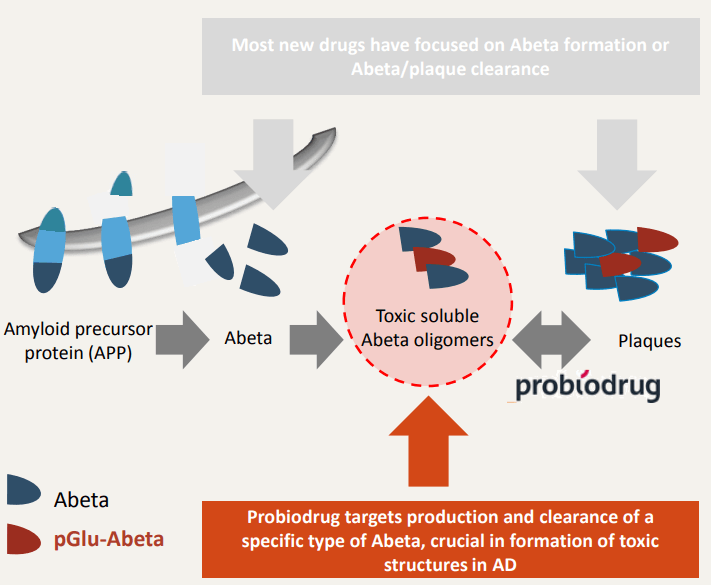 The new results may restore some of the confidence in targeting Abeta in Alzheimer’s, especially after Eli Lilly’s and MSD’s most recent Phase III failures. However, Probiodrug’s CEO Konrad Glund did not seem too concerned about Lilly’s Phase III flop. “There have been huge failures recently, but they targeted soluble ABeta; the toxic culprit is really the early oligomers, which are formed by the aggregating kind of ABeta,” Glund told us.

Henrik Liebers, CFO of Probiodrug, agrees. “Solanezumab was based on the old understanding of Alzheimer’s developed in the 1990’s, when therapeutic efforts focused on clearing plaques. Clearing plaques, once they’ve formed, doesn’t really solve the problem. You have to attack the source of the plaques to stem the flow.”

As Liebers told us in a recent interview, “We’ve learned that it’s much more worthwhile to target toxic amyloids like PGlu that form these aggregates. This is the hallmark of the current second generation of Alzheimer’s therapies, and now we’re starting to see success.”

Yet, Probiodrug is not the only company trying to specifically target toxic Abeta oligomers. In a partnership with Roche, AC Immune is currently pushing its oligomer-directed antibody, crenezumab, through Phase III. Meanwhile, biotechs like TauRx or Asceneuron are seeing promising results in Alzheimer’s by targeting the toxic tau aggregates.

Despite recent failures, the Alzheimer’s field is looking promising right now as biopharma’s pipelines are returning encouraging results. Patients can be hopeful that one of the many potential therapies might reach the market soon!

Images via shutterstock.com /  Groszek and Probiodrug