Next-gen sequencing is a revolution. San Diego-based Illumina owns most of the market but German giant Qiagen is prepared to disrupt this fact by stepping in massively by the end of the year. The fight has only begun.

Imagine you could sequence your genome to discover the disease you may have in the future.

What if I told you, that this is now becoming a reality thanks to the the next-gen sequencing revolution. The first human genome has been sequenced thanks to the Human Genome Project for a total cost of 100 million dollars. Now, sequencing an entire genome costs a mere 1,000$, as the graph bellow perfectly illustrates.

This opens plenty of new possibilities. Times have indeed changed… Back in the day, sequencing may have been a rarely used academic method or only reserved to rich people desiring a personalized diagnostic, yet this era is now outdated. The technique has become a standardized method to detect genetic diseases or to better understand cancers. This leads and drives the currently undergoing personalized healthcare revolution. McKinsey even listed Next-gen sequencing (NGS) as one of the 12 technologies that will transform our lives! The consultancy firm also stated that next-gen sequencing could have an impact of 1.6 trillion dollars on the global economy by 2025.

But how does the technology work? Here is a figure from Illumina. 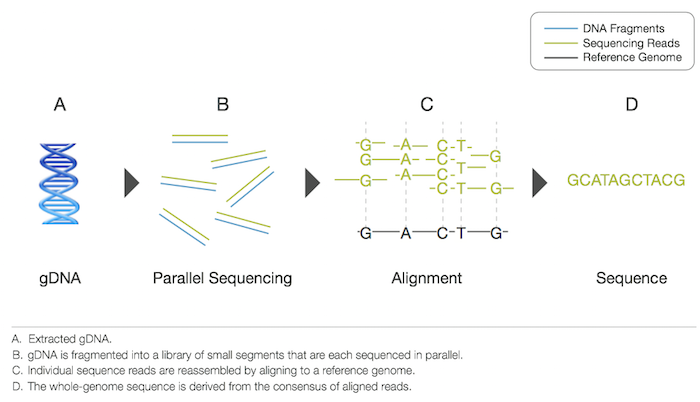 The basic concept is to split DNA in many small fragments, sequence them individually, align the obtained sequences and reconstitute the whole DNA sequence. Sounds easy but it gets challenging when you know the human genome has over 3 billion genome base pairs (A,T,C, or G).

Many improvements have been made to genome sequencing since the 90s. The first method widely introduced to labs was the Sanger method. This methods worked well with small fragments, but was way too expensive and not reliable for big sequences. The next-gen sequencing has completely changed the field. Each fragment is marked with a “barcode”, allowing to sequence many fragments at the same time and to recognize each of them afterwards in the data analysis step.

Two main technologies are fighting today: pH-changes and light emission (click for an explanatory video). The first one entitled ‘Ion Torrent’ by the company Life Technologies and the second one being used by Illumina. Life Technologies is facing many issues with the pH-changes technology, which allowed Illumina to capture over 60% of the worldwide market shares. This success led the company to acquire $1.4B in annual revenues in 2014 and now counts over 4000 employees in its ranks.

But keeping a leading position in a very fast evolving market is no walk in the park.

German giant Qiagen could be Illumina’s main competitor. I was impressed when I visited the company a month ago during our North-Germany documentary (watch video here). This lab-equipment leader plans to launch a complete product line in the NGS field by the end of the year. Qiagen already has the automation expertise thanks to other products they developed. Back in early 2015, the firm took over the world leading producer of next-gen sequencing enzymes Enzymatics. It has an extensive bioinformatic expertise in the field and uses a similar technology to Illumina’s. In a nutshell, a strong challenger for Illumina.

Illumina’s first move to counteract Qiagen was to open its European headquarters in Cambridge’s superbiocluster. Last week, it just signed a lease for a 155,000 square feet building that could be extended to 225,000 square feet. Several reasons make Cambridge a good destination for Illumina. The UK is investing massively in genome sequencing, as the 100,000 genome project shows. The Cambridge cluster is definitely one of the most dynamic life science clusters throughout Europe with many talents every square meter.

But the main reason behind this strategy seems to be the will of Illumina to increase its presence in Europe. Why? To grow on Qiagen’s domestic market! Qiagen may be selling worldwide, but Europe still remains its main market. Machines are produced in Switzerland, the fiscal headquarters are in Netherlands and the operational headquarters lie next to Düsseldorf, Germany.

6 months ago, on January 17th, I wrote an article called Qiagen, the new giant in next-gen sequencing tools? following the acquisition of Enzymatics. At that time, I believed Qiagen would only provide tools for leading manufacturers such as Illumina or Life Technologies, but it is finally going on the battlefront. And I truly believe Qiagen has several advantages to catch a big part of the next-gen sequencing’s market.