Access to data is still the main bottleneck for genomic researchers. Repositive has created a free online platform to solve this problem once and for all.

Repositive is building an online platform that makes genomic data from different sources easily searchable and accessible from a single portal. Its mission is to speed up genetic diagnostics and research by improving the visibility of and access to available data, thus helping researchers save precious time.

Ultimately, this will contribute to making the most of the data provided by patients and donors, who expect it to be useful for the community. The success of precision medicine might actually depend on the availability of this information. The co-founder and CEO of Repositive, an Illumina alumna, knows this — let’s dig in and find out how the company is changing the status quo in genomics research.

Access to large numbers of relevant genomic datasets is necessary for research results to achieve statistical significance. For both small and big companies, the validation of results through genomic data is essential to de-risk drug discovery pipelines and determine if a particular project is worth pursuing — biotech and pharmaceutical companies are keen to get timely data access to save both time and money.

However, finding and accessing data can be extremely challenging for all researchers working with genomic data. First of all, most people don’t know where to look, but there are plenty of data sources. Those who do know where to look run into trouble accessing the data, as the data access process is often complex and time-consuming.

“I was a frustrated researcher,” confesses Fiona Nielsen, founder and CEO of Repositive, who has experience working in both academia and industry. “I still am, but now I’m doing something about it.”

“In all projects I was involved with, I found that the bottleneck to clinical interpretation of results is the access to the right type and amount of data, not the analysis algorithm or the sequencing equipment,” she explains. So Nielsen quit her job at Illumina and founded the charity DNAdigest, of which Repositive is a corporate spin-out, to make genomic data accessible.

Many will wonder why a single platform that unites all genomic datasets was not built before, similar to how the research community has resources like  HGNC for human genes, OMIM for genetic disorders or Uniprot for proteins. The reality is that integrating different data sources, each with its own standards, requires a huge workload to unify and represent them all in the same way. The information was out there, but until now it was not visible and accessible from a practical perspective.

The free community platform Repositive grants access to genomic datasets from well-known sources such as the 1,000 Genomes Project or the Genome Expression Atlas, as well as lesser known sources like the Estonian Biocentre or GenomeAsia100K, and corporate datasets from InSilico DB or Xpressomics. 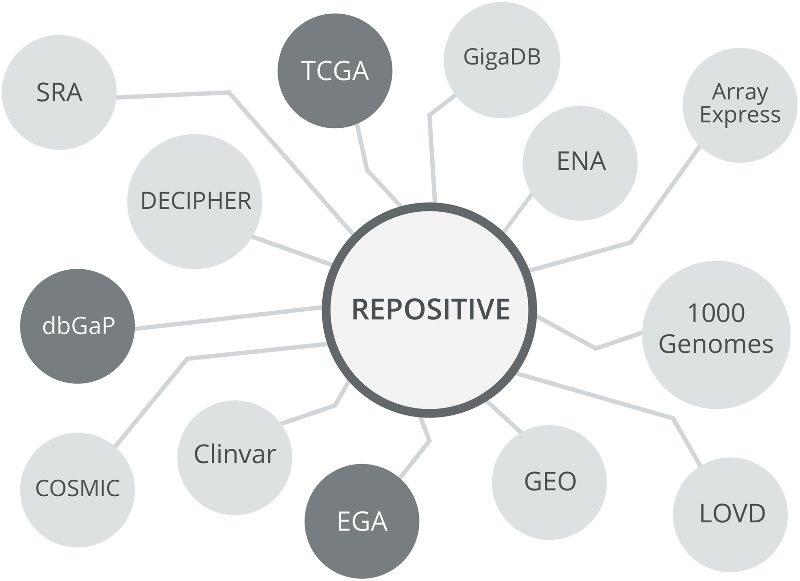 Repositive now lists more than 1 million datasets from worldwide data sources in a single platform, and its team works hard to keep adding more every month. The goal is to incorporate not only public repositories but also the masses of datasets that exist worldwide, including data from institutions, companies and grant-funded projects.

In addition, Repositive has partnered with AstraZeneca, Merck Group and Horizon Discovery, among others, to develop a collaborative resource for oncology research data specific to patient-derived xenografts (PDXs), an experimental model used to study human tumors in mice via transplantation.

The vision of Repositive is to provide a data access solution that ensures information from patients and donors is used in an efficient and ethical way. In addition, the platform aims to facilitate access to datasets with more population diversity in light of the European bias commonly found in genomic databases.

One of the areas where a unified source can have the biggest impact is precision medicine, a field that looks for treatments tailored to the individual according to their genetic background. This goal is unlikely to be realized without widespread access to large amounts of genomic data.

With the current developments, Repositive is becoming a community platform and marketplace for both academic and corporate users to find and access relevant data.  The platform will also benefit data providers, who will get improved data visibility and accessibility, as well as increasing the chances of seeing more papers published using their datasets. Researchers in genomics have all been looking for data for a long time, and Repositive is finally making it not just possible to find enough of the right data, but also easy and free.

Head to Repositive now to start using the platform and get access to all its genomic data sources in a single interface.