By analyzing the responses of individual immune cells, a new study in Science provides new insights into the decline of the immune system with age.

In a collaborative effort, researchers from the European Bioinformatics Institute (EMBL-EBI), University of Cambridge, the Wellcome Trust Sanger Institute and the Cancer Research UK–Cambridge Institute (CRUK-CI) have shed light on a long-standing debate about why the immune system weakens with age. Their findings, which were published in the high-impact journal Science, show that immune cells in older tissues lack coordination and exhibit much more variability in gene expression compared with their younger counterparts.

To analyze why the immune system weakens in older individuals, the study focused on CD4+ T cells, which play a key role in coordinating immune responses. The researchers used single-cell sequencing technologies to study how individual cells respond to stimulation.

While traditional sequencing technologies only give information on the average gene expression of the whole population, single-cell sequencing allowed them to analyze how the response of individual mouse T cells differs in young versus old mice. 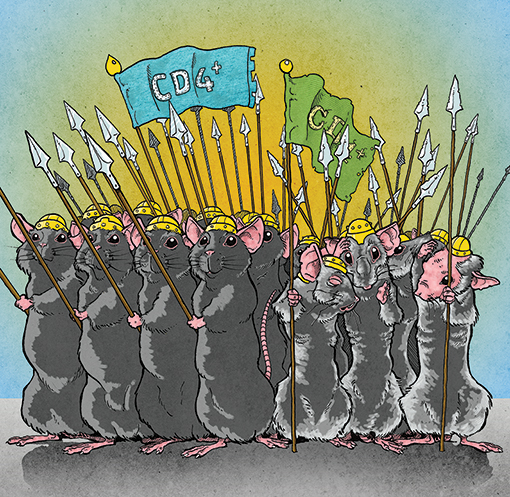 The study could show that in young animals immunological activation results in tightly regulated gene expression, but in aged animals the response of individual T cells becomes much more heterogeneous. “Although individual cells might still be strong, the lack of coordination between them makes their collective effectiveness lower,” concluded Duncan Odom, Group Leader at the University of Cambridge.

These results were also validated in different mouse species as well as in different types of immune cells, suggesting that increased cell-to-cell transcriptional variability may be a hallmark of ageing across most mammalian tissues.

The immune system plays a major role in defending the body against not only infections but also abnormal cells such as cancer cells — therefore, understanding the age-related dysfunction of the immune system could allow for the development of a new generation of anti-aging treatments that could dramatically prolong human life.

The study gives new perspectives on what goes wrong in the aged immune system and paves the way for further studies to unravel what causes this loss of immune cell coordination and apply it to some of the most deadly diseases on the planet.