French biotech Horama has treated the first patients with a gene therapy for retinitis pigmentosa that could prevent the progressive loss of vision caused by this genetic condition.

A Phase I/II trial with Horama’s gene therapy for retinitis pigmentosa is running at the Nantes University Hospital. The therapy is aimed at fixing genetic defects in a gene called PDE6β, which causes retinal cells to progressively die as patients age, worsening their vision over time.

The trial will recruit a total of 12 patients, which will receive an injection of the gene therapy in one of their eyes. The first six patients will receive one of two doses of the gene therapy, and once the optimal dose is selected the results will be confirmed in the remaining patients. Their progress will be followed over time and results will be collected a year after the patient receives the one-off treatment.

“The primary outcome measure is safety: the absence of adverse events,” CEO Christine Placet told me. “Then we will try to capture some signal of improvement of the visual function.” In particular, the trial will be performing tests to see whether the gene therapy improves the patient’s visual field, their mobility, and their reading speed, as well as their quality of life.

The treatment is only directed at those patients whose retinitis pigmentosa is caused by mutations in the PDE6β gene, which is only one of multiple genes that can cause the disease. “Our therapy addresses all PDE6β mutations,” said Placet. “In the US and the five biggest European countries, the estimation is between 3,500 and 5,400 patients with mutations in PDE6β.” 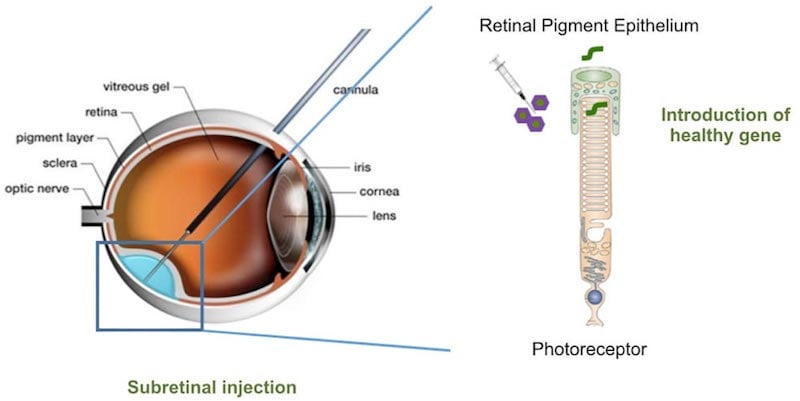 Several patients have already been treated with the gene therapy, which consists of a viral vector that delivers a functional copy of the PDE6β gene. “The gene copy is brought into the cells and reactivates the production of a protein that is necessary for the cell to function,” she explained.

Placet expects results to be ready by 2020, after which the patients will be followed up for two years more. If results are promising, further trials could expand across Europe and to the US.

Last year, the approval of the first gene therapy for a form of genetic blindness marked a huge step in the field. In Europe, several companies including GenSight, Nightstar or Eyevensys are developing several forms of gene therapy for blindness, but so far Horama seems to be the only one specifically targeting retinitis pigmentosa.