Simon Park is a scientist who wants to teach us about the microbiome through his art. Among his works are a self-portrait, lace and stained glass, all of which have been produced from bacteria!

At Cafe Science, Dr. Simon Park, Senior Lecturer in Microbial Sciences at the University of Surrey, described the diversity and ubiquity of microbes. Because they’re minuscule, they are often overlooked, but their visible presence in our environment can be seen every day.

Through his art, he aims to draw our attention to them and make them more familiar. (The apotheosis of the latter is his self-portrait from his own microbial flora!) On his blog, Exploring the Invisible, Simon describes himself as “a scientist who produces outsider art” — his creations are snapshots of his scientific work rather than the product of an artistic drive.

Our eyes were first caught by glass Simon ‘stained’ with bacteria to stand alone and for jewellery and spectacle lenses. He grows bacteria in the lab on media with nutrients and water and converts it to a gel. By then removing the water, the material becomes a glassy film encasing the bacteria, which, he notes, are inactivated by this process so his products are safe to use for art projects.

Simon has since moved on to creating lace from other bacteria, as he described in a blog post, ‘Living Lace’, last week. In collaboration with a womenswear designer at the Royal College of Art, he is integrating a unique photosynthetic biomaterial, Helion 15, into traditional textiles. Bacteria synthesise this material, so it grows into the fabric fibres, “making it difficult to determine where the manmade material ends and where the purely biological organism begins.” 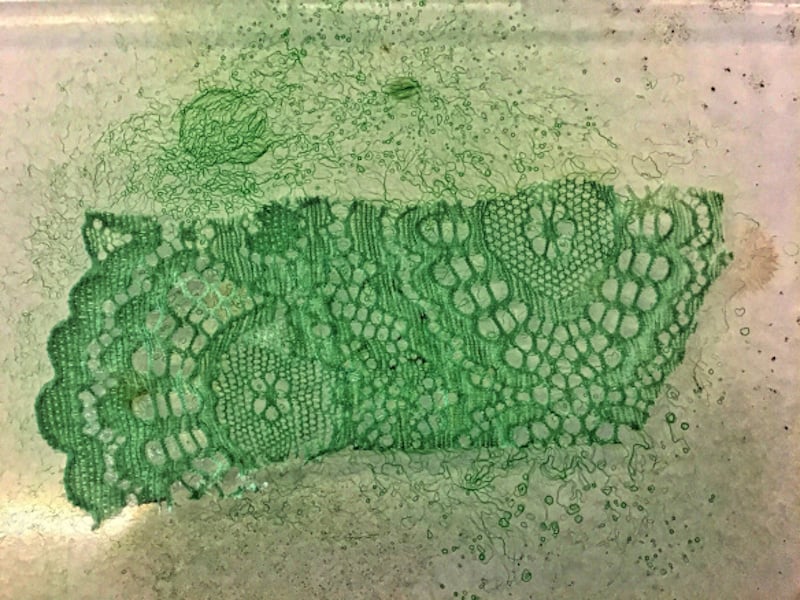 Through these works, Simon says he is “exploring the inherent creativity of the natural world”, rather than expressing himself. He’s driven to “reveal its subtle, and usually hidden narratives, and above all to reveal its wonder” to “allow the interested observer to perceive biological phenomena that would otherwise be perpetually invisible, so that the hidden machinations of the natural world are brought to light.” Beyond his lectures at the University of Surrey, Simon teaches us about the microbiome through art!

If you’re in the mood for education, check out our review of the synthetic biology field to learn about what else bacteria can make!

All images courtesy of the artist