Muscular dystrophy is a type of degenerative muscle disease. One of its most known forms, Duchenne muscular dystrophy, affects 1 over 3 500 boys worldwide. It affects patients progressively, they have their muscle mass and function decreased and they eventually lose the ability to walk. There is no cure, and available treatments are only able to slow down the degeneration process.

Normally, when a muscle fibre is damaged, the stem cells communicate through a chemical signal, change themselves into muscle fibre and create copies of themselves until the muscle is healed. But since muscular dystrophy inflicts constant damage to the muscles, the repair burden placed on these cells is so big that they become exhausted and they eventually loose their ability to copy themselves. Degeneration overcomes regeneration, and damaged muscle fibres are replaced by fat cells and scar tissue.

Until now, most scientists thought that the best solution to treat this disease is to deliver healthy stem cells to muscles, so they could generate new muscle fibres to replace the damaged ones. But for Dr. David Sassoon and his team, this solution is not efficient and too complex. Their project launched in 2010, ENDOSTEM (Activation of vasculature associated stem cells and muscle stem cells for the repair and maintenance of muscle tissue), aims to identify an agent capable of ‘boosting’ stem cells already present in muscle tissue for a more efficient tissue repair. 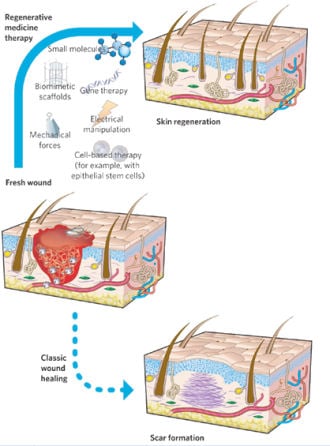 The idea of ENDOSTEM is to figure out another way instead of genetically altering the tissue through cornea or viral DNA transfer, or taking out stem cells or putting in stem cells to mobilize or encourage the stem cells that are already there to do their job.

The approach does not involve taking stem cells from the patients because the major problem with taking someone’s stem cells, repairing them and putting them back, is that it is very complex. In this scenario the stem cells are considered as a medication, and they are submitted to very complex rules in terms of how they can be used, as is doing company Bluebird Bio interviewed in LaBiotech Tour Boston. On the other hand putting in a more standard pharmacological medication such as a growth factor or saccharide is easier and approval and trials represents significantly less hurdles than using living cells. Moreover, you don’t have to suppress the immune system.

This approach is recognised as one of the most promising approaches to targeting stem cells for regenerative medicine due to the alignment with existing therapeutic development approaches used by large industry and recent advances in understanding the key barriers for tissue regeneration.

Dr. David Sassoon, coordinator of the ENDOSTEM project said : “The fundamental research is almost never completed. We still need to understand the nature of the signals transmitted between progenitor cells, and another question that has become more important for me is, why regeneration ultimately fails as part of the ageing process.”