UPDATE (26/05/2017): GW has released more positive results in The New England Journal of Medicine demonstrating that Epidiolex dramatically reduces convulsive seizures in children with Dravet syndrome. The results have primed the drug for its NDA submission to the FDA and led some to forecast blockbuster success.

The drug was shown to significantly reduce the frequency of convulsive seizures in children with Dravet syndrome, a rare form of treatment-resistant epilepsy. Furthermore, the reduction in seizure frequency was shown to be robust during the entire course of treatment with minimum adverse effects.

Dravet syndrome is a treatment-resistant form of early-onset epilepsy that is frequently associated with a genetic mutation in sodium channels. Children with the syndrome suffer from severe and long-lasting seizures, which can be life-threatening. You can read more on the Dravet Syndrome Foundation.

In addition, the syndrome is associated with an increased risk of premature death including ‘sudden expected death in epilepsy‘ (SUDEP) as well as intellectual and development disabilities, including Autism (see my last review on Autism spectrum disorders).

Currently, no FDA-approved drugs for Dravet syndrome exist (as is “extremely resistant to treatment“) and patients are treated with anti-convulsive drugs as well as anti-psychotics, stimulants and treatments for insomnia.

However, due to low efficacy and adverse effects of these drugs, nearly all patients continue to have uncontrolled seizures throughout their lifetime. Many families are now therefore turning to ‘Medical marijuana’ in the states (which is not FDA approved, but state regulated in certain areas of the US). However, this option is not afforded to more conservative countries, including the UK.

This is partly why Epidiolex, the star drug of GW Pharmaceuticals cannabinoid-based portfolio, raised €158.9M last year after the drug was granted orphan drug designation for treatment of Dravet syndrome by the EMA.

The drug is a liquid formulation of plant-derived cannabidiol (CBD), which is the major non-psychoactive ingredient in Cannabis. CBD was shown to act as an anti-convulsive in animal models, possibly by reducing excitability and neuronal transmission.

However, the mechanism of CBD’s action is still unknown, although it is suggested that CBD modulates intracellular calcium levels via interaction with various calcium channels and receptors in the brain.

In addition to its anti-seizure effects, CBD has a wide range of biological effects in the nervous system, as well the immune system and cancer. This multi-functionality makes CBD a possible tool to also treat psychiatric disorders, anxiety, cancer, immune diseases and other forms of epilepsy.

GW is currently evaluating additional clinical development programs in other orphan seizure disorders, as well as glioma (cancer of the nervous system), type 2 diabetes and schizophrenia. 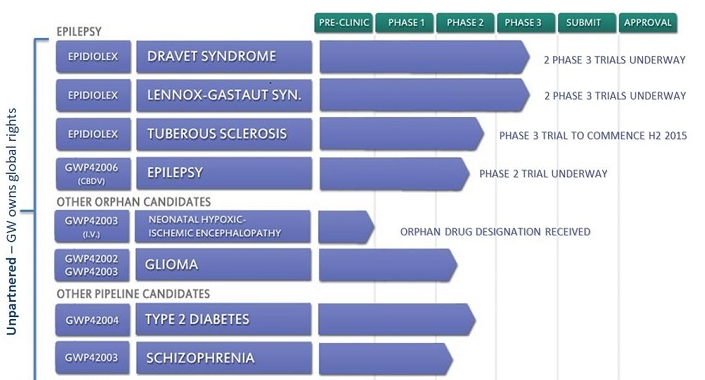 The success of GW Pharmaceuticals paved the way for other companies pursuing CBD drug development; Insys Therapeutics (US) launched a Phase II study for the ‘Treatment of Infantile Spasms Using CBD‘ last month. Then Cannabis Science (US) moved its clinical development of CBD drugs forward for neurological disorders, as well skin cancer and even HIV!

Although clinical development of cannabis based drugs remained under the veil of prohibition for decades, the growing evidence of their potential benefits may ease the path for scientists.

And perhaps then, we can develop novel CBD-based drugs for some of the most devastating medical conditions.

A mini-Documentary on how CBD is dramatically improving the lives of children with Dravet Syndrome in the US, despite the controversial bureaucracy surrounding ‘Medical Marijuana’
Please accept preferences cookies to watch this video.