British artist Victoria Shennan has created a musical composition based on the microorganisms that form an essential part of us.

We are just starting to realize the huge role that microorganisms play in our well-being and the proper functioning of our bodies. Research on the human microbiome in the last decade has linked the microbes that live inside and on our bodies to conditions ranging from cancer to Alzheimer’s, diabetes, autism and many more.

Despite its crucial role in our lives, the microbiome can seem an abstract concept given that the millions of microbes in our bodies are invisible to our eyes.

When scientists study microorganisms, they often sequence their DNA in order to identify their species and the myriad of unique functions each of them can perform. However, to the untrained eye, this data just looks like long strings of letters and numbers from which it’s difficult to infer the rich diversity of microbes that share our body.

Victoria Shennan, a Scottish artist, paints a picture of these tiny beings without using images. Instead, she converts them into music. The resulting musical composition, titled Anthropocene, highlights the differences between the microbes found in different parts of our body. In this case, our hands, our mouths and our gut.

The background melody of the piece is determined by the DNA of the microbes that are most characteristic of each body part. With the help of Jack Hurst, then a Master’s student at the Royal College of Music, Shennan developed a computer program that translated short DNA sequences into notes by assigning a tone to each of the four units that make up DNA sequences. 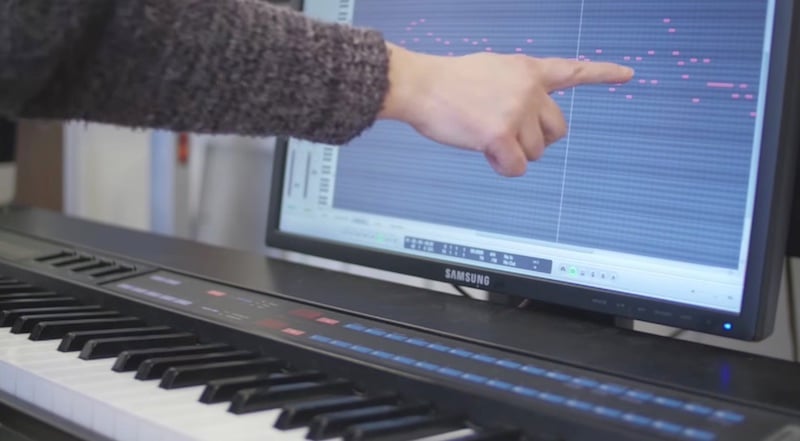 On top play a series of melodies derived from the proteins produced by the microbes. To do that, Shennan collaborated with Dr. Linda Long, a biochemist at Exeter University who has developed a method to generate music that represents the three-dimensional structure of proteins. Using the data from X-ray crystallography, a technique that determines the spatial disposition of the amino acids that compose the protein, the computer assigns note sequences to specific 3D features of the protein.

“In this way, characteristic patterns in protein structure such as helixes (heard as arpeggios) and beta-sheets (heard as a succession of similar notes) emerge as recognisable musical note patterns from the three-dimensional structural data,” writes Long in her website. “The musically pleasing quality of such generated note sequences is incidental, although perhaps not surprising given that it is the repetitive patterns in music that we find most appealing and memorable.”

The final piece is a pleasant composition that takes you through the different patterns that the artists found on the microbes in our bodies, changing in rhythm, melody, and intensity throughout the piece.

You can listen to the composition here and judge for yourself. The piece is also part of the permanent exhibition Invisible Worlds at The Eden Project in Cornwall, UK, which gathers artwork that reveal the unseen world of the microbiome.